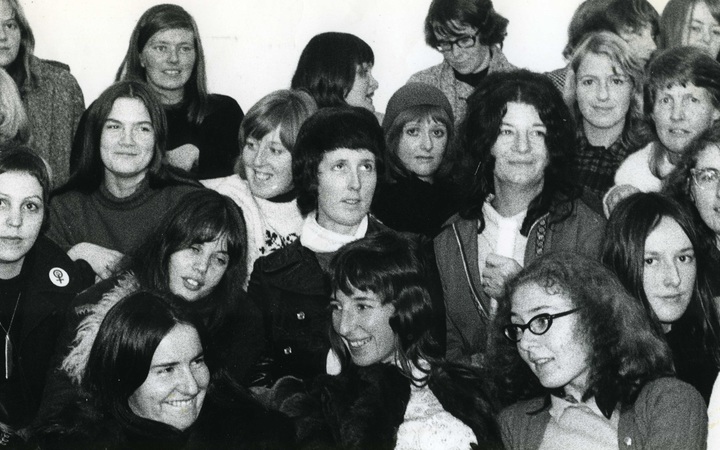 Nearly 50 years after the women's liberation movement kicked off in New Zealand, women have access to birth control, abortions and work after having children. JOELLE DALLY asks three second-wave feminist legends if we need the movement today and, if so, what for?

Bronwyn Gray bought the T-shirt emblazoned with ``make policy not tea’’ during a Christchurch women's convention in the 1970s.

She "wore it, and wore it and wore it" until the fateful day photographer Marti Friedlander popped into her Ponsonby, Auckland, home in 1979.  By then the shirt was an ``old rag’’.

That day, Friedlander took a famous photo of Gray and her partner, Lesley Boyle, as they removed wallpaper and painted.

The photo, which Ms Gray uses as her computer screensaver, featured in books and feminism exhibitions worldwide.

"People often commented on it. It was my favourite. It became old [and] raggy after several years of wearing. I must have thrown it out." 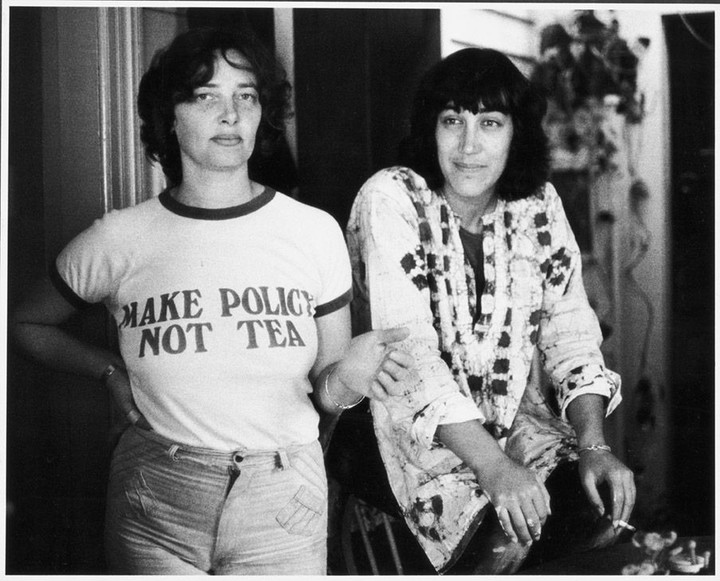 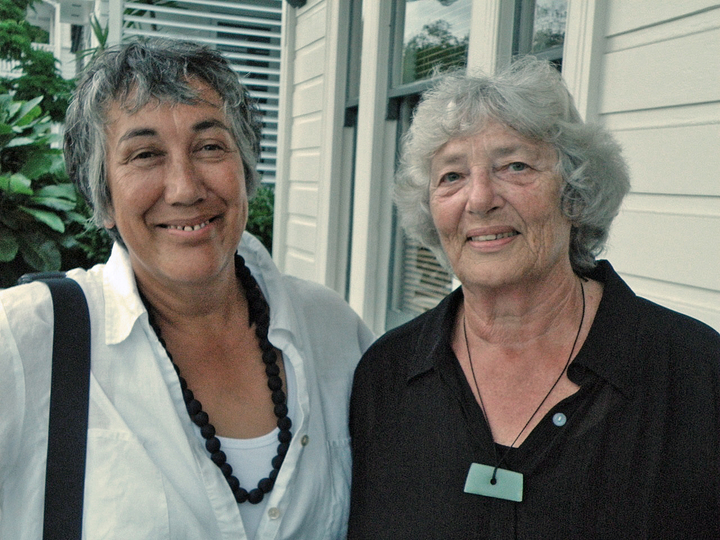 When Friedlander took the picture, Ms Gray was "a new, young, thinking" 33-year-old.

She'd married at 19, had two children and got "not married" at 29, though she kept his surname.

There was no "epiphany moment", though Ms Gray recalls a television news item about a woman who stabbed her husband when he arrived home drunk, yet again, demanding dinner.

Fast forward nearly 50 years and girls know their job options go beyond teacher, nurse or wife. There is no flying to Australia for an abortion. A woman can buy a house without a man signing as guarantor. There is a sole parent's benefit, childcare subsidised for 20 hours a week and Rape Crisis.

There are more women in Parliament. Men change nappies and push prams.For Ms Gray, "make policy, not tea" became protest – against the 1981 Springbok Tour, in favour of nuclear disarmament, of the 1985 bill for homosexual law reform. Today, advocating for better medication access for people with rare disorders takes up most of her time.

The term feminist is "out of date", she reckons.

Sure, for women, things have changed for the better, Ms Gray says, “but it hasn't changed enough”.

"We have to have young, thinking, fabulous people take over the reins." 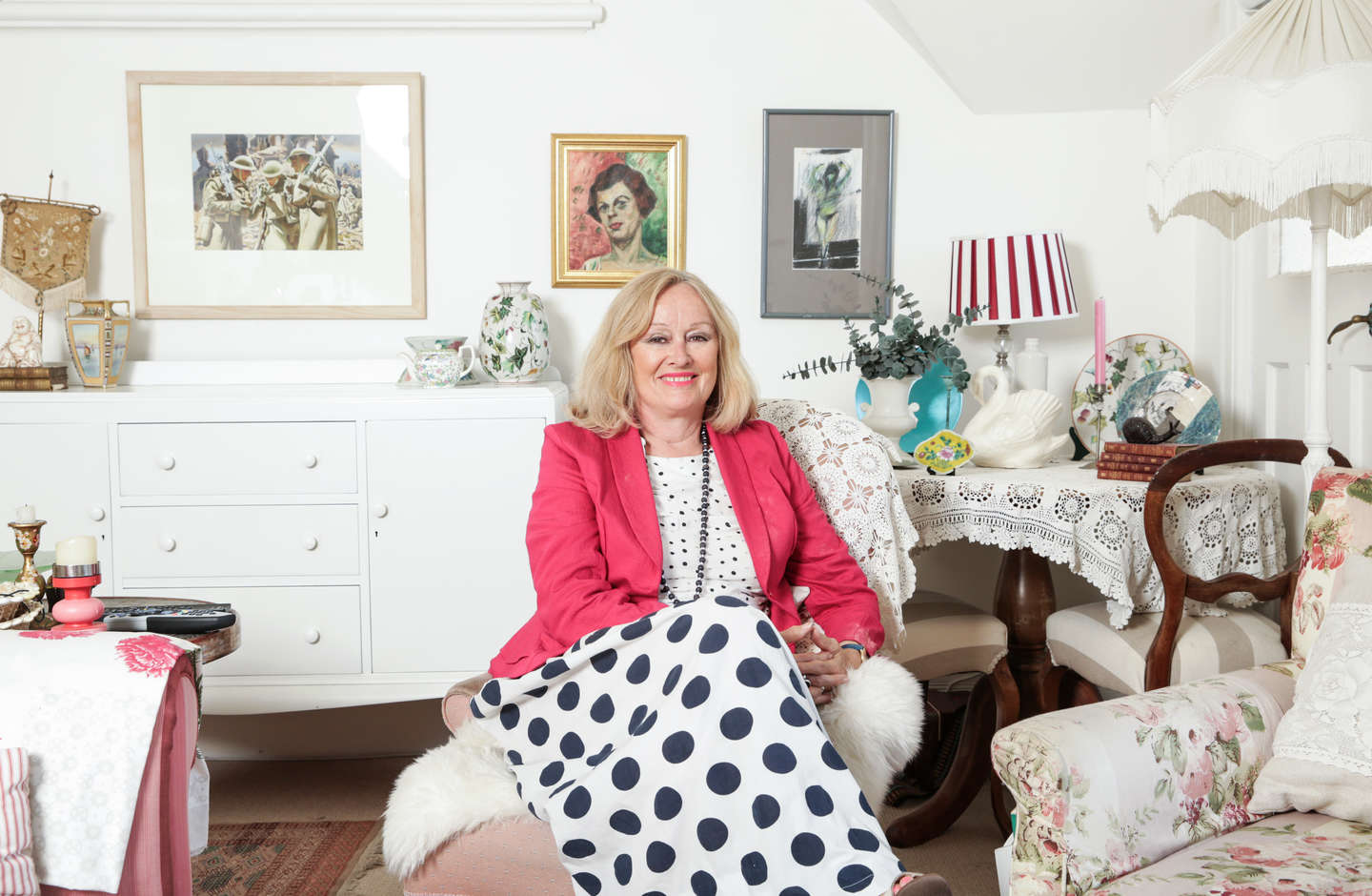 Sue Kedgley is an activist and feminist who was a leader the Woman's Liberation movement in Auckland, New Zealand during the 70's and is still active today. Photo: RNZ / Rebekah Parsons-King

Sue Kedgley, a leading figure in the women’s liberation movement in the 1970s, says being a feminist is more than believing men and women are equal. It is advocating for equality.

“Feminism has always been a loaded word. Many people saw it as somehow rejecting men. We weren’t at all. Just rejecting that women were inferior,” the 69-year-old says.Feminism shaped her life.

Ms Kedgley gave up on a radio job because she was told women’s voices were “not authoritative enough”.

At 22, she headed to Auckland University, where she started a women’s liberation group. After that, it was marches, demanding law changes, liberating all-male bars, writing columns, touring with Greer, speaking around the country and writing her first book, Sexist Society.

She worked in the Women's Secretariat at the United Nations in New York.  Then it was back to New Zealand for a career in broadcasting and then politics. 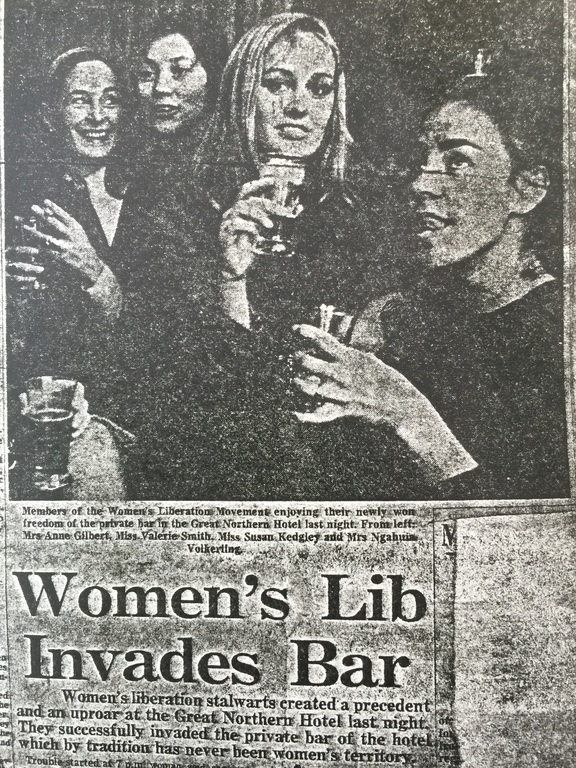 She married Denis Foot at 40 and had their son, Zac, when she was 41. Both are great cooks, she says.

As a Green Party MP, she got her flexible working hours bill passed in 2009. Today, she is on the Wellington Regional Council, the district health board and the Consumer NZ board, among other things.

Ms Kedgley says Kiwi women live in a “different world” to the one offered in the early 1970s.

“You only need to go to Saudi Arabia where women can’t drive a car. Eqypt, where 98 per cent of women say they are sexually molested when travelling. Nepal, where a woman with a period is considered unclean. Papua New Guinea where women are killed for alleged sorcery. The Pacific Islands, where two thirds of women are sexually assaulted.”

Yet there is “unfinished business”, she says.

When the Government applied the Equal Pay Act (EPA) to the private sector in 1972, Ms Kedgley thought equal pay would “come naturally”.

Forty-six years later, it is widening, with men earning a median of $25 an hour to women’s $22.

Ms Kedgley says recent retrograde changes to policy in the US, including those affecting women’s reproductive rights could prompt a third wave of feminism. The recent women’s marches showed people were prepared to protest, she says.

“It could be a struggle to retain what we fought for”, she says, but it is up to young women to choose the issues.

Sandra Coney has a theory.

Young women are so busy with careers and having a "glossy magazine-style family" they have little time for activism.

After joining the highly-organised Auckland Women's Liberation group in 1971, "being side-tracked by a career wasn't where it was at".

"They were women of imagination and energy. I met lesbian women, single mothers. People who were dedicated to social change. We did things that were 'out there' - shock tactic kinds of things.

"It totally took over," the 72-year-old says.The co-founder of Broadsheet thinks she was a natural-born feminist, thanks to a sports-mad father who raised her and her sister "like boys". 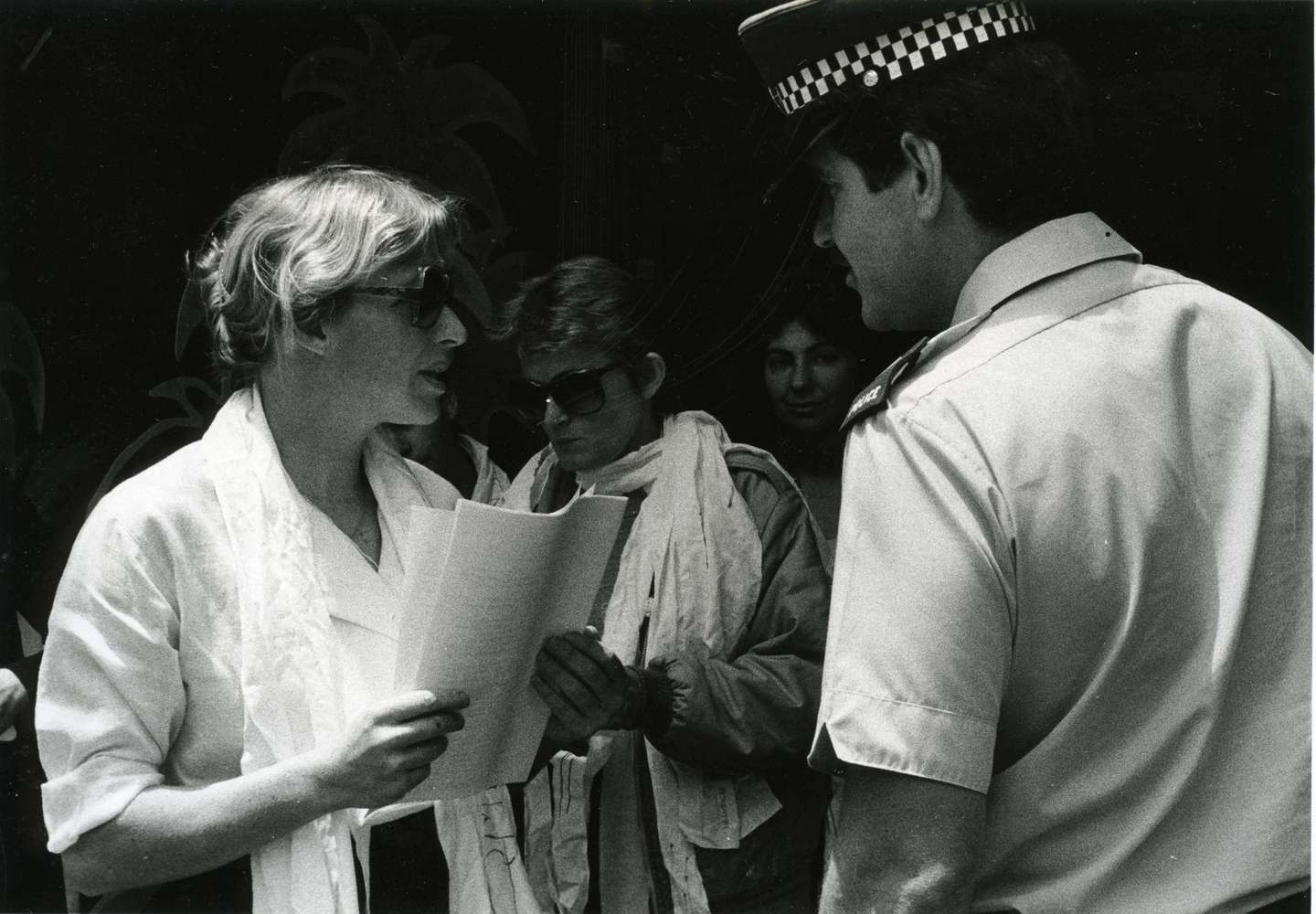 Sandra Coney at a 1983 rape trial picket. Protesters said Auckland lawyer Honoria Grey used rape myths to defend a rapist. "I'm trying to explain to the cop what the demo is about. Note the white ripped-up sheets, smeared with 'blood', we were wearing. Very dramatic for the lunchtime crowds in Queen Street." Photo: Supplied / Gil Hanly

Ms Coney co-edited the magazine for 14 years. She worked 10 years as an abortion clinic counsellor, was a freelance journalist, ran a women's health group for 10 years, entered local government and wrote books.

In the 1970s, people invented what feminism meant, she says.

It did not matter so much if your children (she wed at 17 and had two boys) were a bit scruffy.

They had pamphlets saying what they stood for. If anything, it deserved more credit as a ground-breaking body of intellectual thought.

"Diversity, equal pay, reproductive rights - you could nail these things to the mast. Now, it's become so muddied.

"What now, is seen as being feminist, is not feminism at all. It's false bolshiness, being very assertive, but nothing much behind it. It's seen as a personal quality rather than a political agenda."

The sexist stereotyping of children's books, clothing and toys has crept back, Ms Coney says.

In education, women have blossomed, but in the workforce discrimination remains entrenched.

"The very point they would step into higher roles is also when they have children. 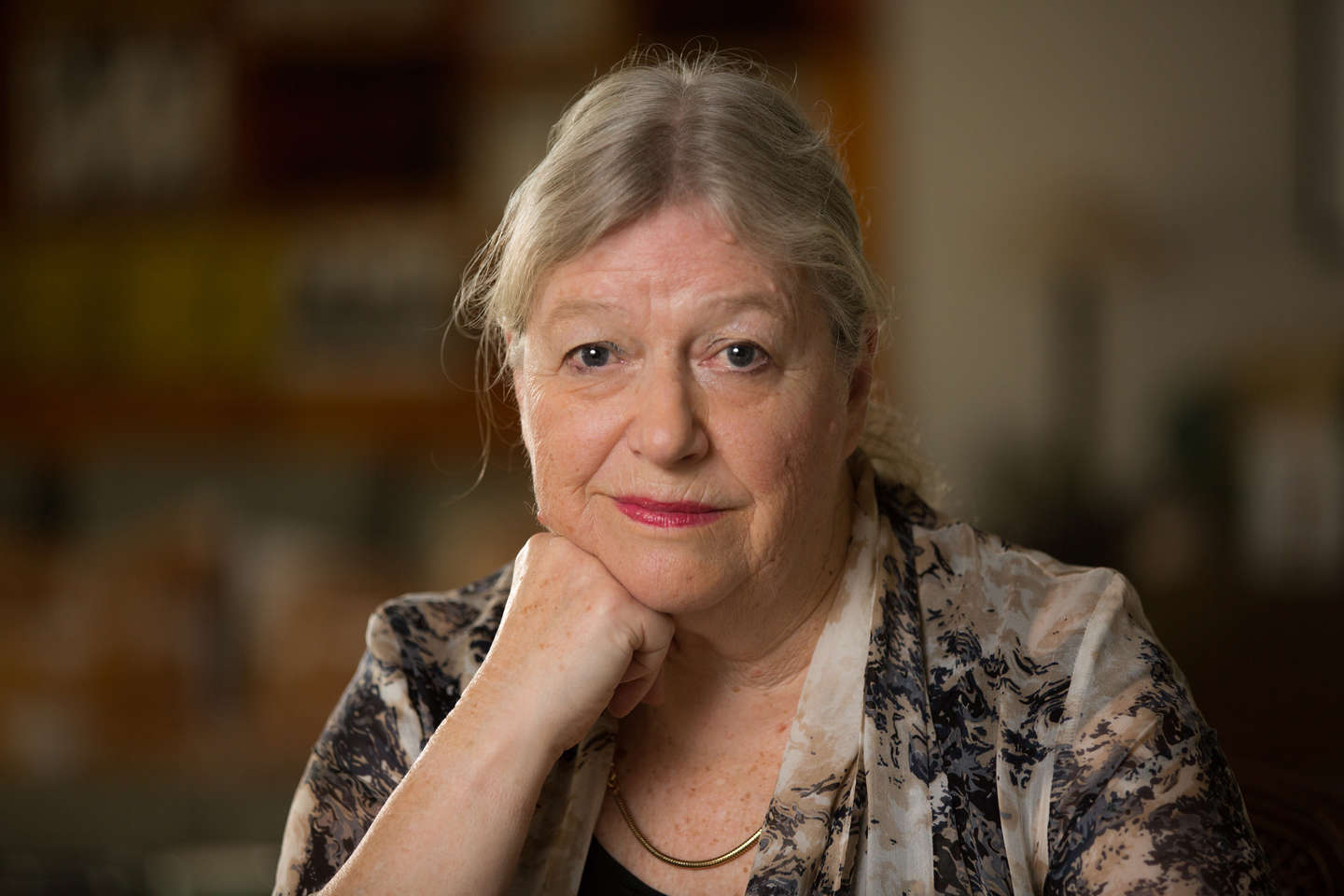 "You measure progress by the women at the bottom, not at the top."Her marriage ended in 1973. Her husband was a kind man, but being the "little woman" did not bode well, she says. She's been with her current partner since 1981.

She says strong, capable, intelligent women should band together.

"We would smash windows, we would rip posters off dairies. We wrote a million letters, signed petitions. Don't think you have to be too secure in life."

* This is the first in a multi-platform RNZ series on Contemporary Women, in association with the Cindy Sherman exhibition at City Gallery Wellington. The series includes a panel discussion 'Feminism - The Morning After', with Ngahuia Te Awekotuku, Michele A'Court, Anne Else and Dr Jackie Blue, followed by another on 'Digital Feminism'  and Kim Hill hosts Miranda Harcourt and Dr Claire Robinson to discuss 'Ageing and Agency'.