Domestic abuse affects many families in Pacific communities in New Zealand.  But finding people to speak to about it was tougher than Simonne expected.  Abuse is shrouded in secrecy and shame and people rarely speak publicly about it.  So, when Simonne discovered a video called Say Something, which dramatised domestic violence in a Pacific family, she went to visit the actors.

Samoan New Zealanders Landa, her husband Ace and their 19 year old son Lavahki participated in the Say Something video.  The video was produced by Pacifica Proud, a Ministry of Social Development initiative to curb domestic abuse in Pacific communities.  Once released on social media last year the video touched a nerve.  It’s been viewed over 220,000 times without any promotion and Lavahki and Ace have been inundated with messages.  Many of these were to thank them for creating space for Pacifica to speak out about their own experiences of abuse.

But it turns out that not only had domestic abuse occurred in the past within the actors’ family but making the video had re-triggered some of the issues they thought they’d all put to rest.  Ace was forced to confront his verbally aggressive behaviour towards his wife and the physical abuse he’d dealt out to his son.

This was part of the reason why Lavahki tried to commit suicide a few years ago.  But, after dealing with these issues, the family say they have become more resilient and emotionally stronger.  The change, says Ace, was due not only to the video but also to his embracing his faith and becoming more involved in his church. 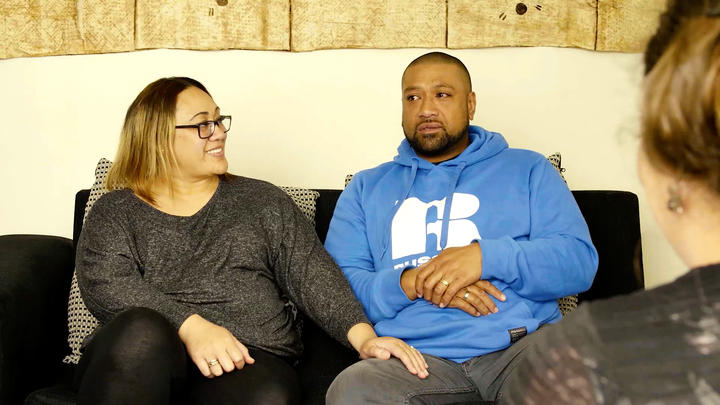 Ace and Landa Tolai: "Say Something."

New Zealand Samoans Ace and Landa Tolai are passionate advocates for speaking out and seeking help when it comes to domestic abuse.  They know from personal experience how transformative this can be.  So when asked to act in a video aimed at driving that message home, they didn’t need long to think it over, their answer was a resounding “Yes”.  They even included their real life son, Lavakhi, to play the part of the son in the video.  Yet, while they had understood the message of the video, they could not at that stage have understood the impact it would have both on them as a couple and their wider Pacific Community.

The "Say Something" video was produced by the Elim Christian Church in Porirua and funded by Pasefika Proud, the programme aiming to mobilise Pacific communities on family violence prevention.  The video tells the story of a teenage boy, who doesn't want to go home because of on-going arguments between his parents.  He in turn tries to use force with a female friend to make her speak to him.  In the end, after a few twists and turns, the family sits down with some support people, opens up  about their issues and goes on to seek help.  A simple message, but not a simple process for Ace and Landa to be part of on an emotional level as the video so closely mirrored experiences in their past.

Having both experienced domestic abuse in their childhood, it is now not a surprise to them that they grappled with abusive elements earlier on in their own marriage.  While they say the abuse between them was only ever verbal and anger directed towards objects, that anger did spill over from father to son on occasion.  Both Ace and Landa could see the damage they were doing to one another and to the family as a whole.  They didn't want to pass on the burden of domestic abuse to their children, were desperate to break the cycle of inter-generational abuse but didn't know how to.

The big turning point in their lives came when they found Jesus and through their local church connected with a community of people.  Their commitment to becoming better people as born-again Christians and the relationships they formed through the church found them able to share stories about their life and struggles.  "It was attending life groups in our church with people you can trust and keep you accountable," Ace says.  He was also lucky enough to have close cousins he could confide in and who served as role models for him.  In the end, along with God's word, it was being able to say something, being able to speak out and ask for help that helped him transform his life.  He urges others to do that same, "It’s so important to speak up, I know it can get hard and especially finding the right people to talk to, but with the right support team there, I pray you’ll have the courage to speak out.  My encouragement to you today is, don’t bottle it all up."

While very proud of their Samoan culture, and all the positive things it brings to their lives, Ace admits there are aspects of the culture that may compound issues around domestic abuse.  "Because we have chiefs in Samoa, we grow up knowing that as a young person you just keep quiet."  Landa joins him, saying "The other big thing in our community is the family name.  Your actions and experiences don't just reflect on you as an individual.  They reflect on the whole family name.  I think this also stops people from speaking up.  They don't want to bring shame on their family.  So it keeps everyone silent."  But she wants people to know that it's ok to ask for help and that by speaking up families can put an end to family harm.

Indeed, the potential for positive change that comes through speaking up and seeking help is the key message of the “Say Something” video.  Marie Schmidt from the Ministry of Social Development is Lead Advisor for Pasefika Proud and says, "While the Elim team had no acting or video production experience, the outcome is a video that not only addresses family violence as a silent predator that creates fear or a culture of shame and emotional turmoil, as well as hindering people from reaching for help.  It also highlights how bringing the issues out into the open can have a positive impact - it's ok to ask for help and know there are people, organisations around you that can help and provide support."  By all accounts the video has been a success in helping to get that message out both within New Zealand and beyond.  Marie Schmidt says, "With over 220,000 Facebook views, it's clear that the video resonated with the target audiences, both in New Zealand and around the Pacific, as we noticed many people were sharing it with their friends and families in the Pacific too."

Another positive outcome, though making and viewing the video pushed major buttons for Ace and Landa as it so clearly brought back memories from their past, it also made them realise there was still room for improvement in their current relationship.  There were still a few unresolved issues they could work on, still things they could improve.  So with renewed vigour and commitment they have set out to work on and improve their family dynamic.  Landa says, "Since the video lots has been happening, we’ve made better decisions, and communicated better to one another, making more time for ourselves and discovering each other again."  They recently went on holiday with their five children just to reconnect and enjoy spending time together as a family.

The Tolai family has openly shared their story in the hope that it can help others; that others see that, by speaking up and getting support, it is possible to break cycles of abuse and turn things around for the better.  As Landa puts it, "If it's going to help someone else to hear our story, then that's good enough reason to share it.  We are 'overcomers.' That's what we want people to see."