In 2009 David White’s daughter, Helen, was shot dead by her husband Greg Meads.  That murder became national news, largely, David believes, because Greg is a wealthy man.  David has since become a staunch campaigner, fighting to end domestic abuse.  He travels around New Zealand to spread his message of understanding and forgiveness.

Simonne follows David to one of his public presentations, in this case Henderson Police HQ.  Henderson is one of the country’s worst affected areas for domestic abuse.  At the presentation David expresses his view that domestic harm is not a poor, brown problem but one that effects the entire country either directly or indirectly.  He argues that the police deal with only 20% of family harm (which is what is reported), and that people like him are trying to
deal with the remaining 80% - caused not only by abuse but by the ripples of harm that extend from it.

The solutions, he says, are to revive communities, and to break the cycle of harm.  To do this he offers help to anyone who needs it and speaks in prisons and schools.  He also is a vocal proponent of more holistic initiatives such as the New Zealand Police’s Safety Assessment Meetings, which bring together multiple agencies to try and resolve problems in damaged families rather than jailing the perpetrator.

Simonne follows David to a public march where he addresses a White Ribbon event. 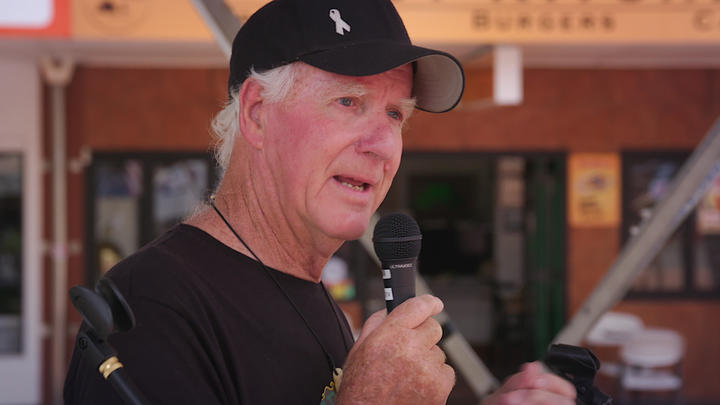 David White: "Our biggest killer is our silence."

David White is a man on a mission and he's not mucking around.  His wish, quite simply, for there to be no more victims of family violence  in this country.  Though given the power to turn back time, his greatest wish would be to have known, more than a decade ago, what he knows now.  He firmly believes that knowledge would have saved his daughter Helen’s life.  Since losing her he’s worked tirelessly to save other potential victims and their families from the pain he and his family have gone through.

In 2009 Helen Meads was murdered by her husband.  David knew that his daughter’s marriage was abusive but believed that he was taking the necessary steps to help mitigate the problem.  He says that Helen had become increasingly isolated from others through her husband’s demands and behaviour.  He also noted that that behaviour had become increasingly controlling with constant calls to check her whereabouts, monitoring her text messages.  However, having never experienced abuse himself, David was unfamiliar with it.  He now sees that he misread the signs of what was happening in his daughter’s marriage and failed to see the picture they were painting.

David failed to seek external help or advice.  He urges anyone witnessing or experiencing a relationship with escalating isolation and control issues to confide what’s happening in someone they can trust implicitly, as well as reaching out confidentially to an agency specialised in domestic abuse.  His own failure to do so was a mistake he believes cost his daughter’s life.  "If I’d just picked up the phone and made one call to Women’s Refuge and told them what was going on they would have been across me like a rash.  They would have seen the signs for what they were.  Helen is dead for want of us lifting a phone and asking  a question."

For all that he didn’t use to know, David’s eyes are now wide open to the nature and extent of domestic abuse in this country.  He knows that it has no boundaries; not geographic, not socio-economic, not racial.  He knows that men are also victims of abuse.  He knows that children suffer.  He wants to see change and is doing all he can to bring it about; writing books about family violence, sharing his story to groups all over the country, lobbying politicians.  Last year he was on the road for 14 weeks in a row, visiting 71 electorates in 71 days and giving over 120 presentations.  Across the whole year he puts his total number of presentations at around 300.  "Everything to me now is about prevention."

But he’ll be the first to tell you that this is not about him, it’s not about any one of us but rather every one of us.  He believes that we all have a role to play in turning the tide on domestic abuse.  We all have to learn to speak up, "The biggest killer in this country is our silence."

Putting his own spin on the slogan "It’s Ok to ask for help", David stresses, "It’s OK to be the help."  Going back to the basic concept of recreating caring communities, the kind he grew up in as a child, he urges each of us to get involved, to reach out, to care enough about others to ask if they really are ok.  "Go help someone next door.  Go stop an argument."

Even though he urges victims to seek advice and help, he questions why as a society we place the burden of responsibility for change on them.  "Stop expecting a victim to stand up and walk out.  You’re expecting them to turn from a being a beaten person into an Olympian athlete."  He notes that when we hear of yet another person losing their life to domestic abuse we’re all quick to say that somebody should have done something.  David asks pointedly, "What if that somebody was you?"  In one of his books he writes, "If you have suffered, or are currently still a victim of family violence, my thoughts are with you.  I hope you can either find the courage to take the first step to move away from the violence, or that very soon someone will ask you if you would like help."

David has asked many people that question.  He has helped many and will keep on helping.  Though he’d planned to step away from most of  the work he’s doing around family violence at age 75, that time has come and he’s granted himself an extension.  What’s more, this year he’d like his work to take on yet another dimension.  His vision is to tackle the issue of bullying by taking a programme into schools.  He believes patterns of bullying and being bullied play directly into domestic abuse in later life.  "Our kids need the help."

As to his own child, when asked what he believes Helen would think of the work he’s doing he says, "Put it this way, I think I’d be getting a flick in the ear if I wasn’t doing it."  Ten years on he still keenly feels her loss, "Don’t tell me time heals.  It does not.  This pain will never go away."  But he also feels her presence.  On a number of occasions, at the end of a presentation, someone from the audience has come up and told him that he or she could see Helen right there beside her father.  David concurs, "Yes. She’s with me every day. I couldn’t do this without her."