How do we want to age? And how much control will we have over the process? Noelle McCarthy visits the Dunedin Study, and finds out why the most accurate measure of your age might not necessarily be your birthday. 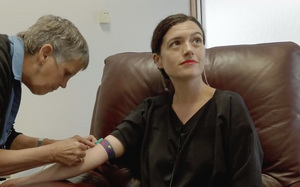 Noelle McCarthy has blood taken as part of a string of tests to determine her biological age. Photo: RNZ/Diego Opatowski

Potentially, we all have control over how we age.

Genetics plays a part, but there are other important factors: whether you get enough sleep, what you eat and how much exercise you do.

The Dunedin Study has been tracking everyone born between April 1, 1972 and March 31,1973 at the city's Queen Mary Maternity Hospital. When the 954 subjects were aged 38, they tested them all to find out their biological age.

Measured biological ageing in young adults can be used to identify causes of ageing and be used to evaluate therapies to slow the ageing process, the researchers say.

“We've all got options, strategies we can bring to bear that will make things better or longer,” says Professor Richie Poulton, who directs the study.