The mother of missing four-year-old Western Australia girl Cleo Smith has made another heartbreaking plea to "bring her home", saying the little girl "is everything to us". 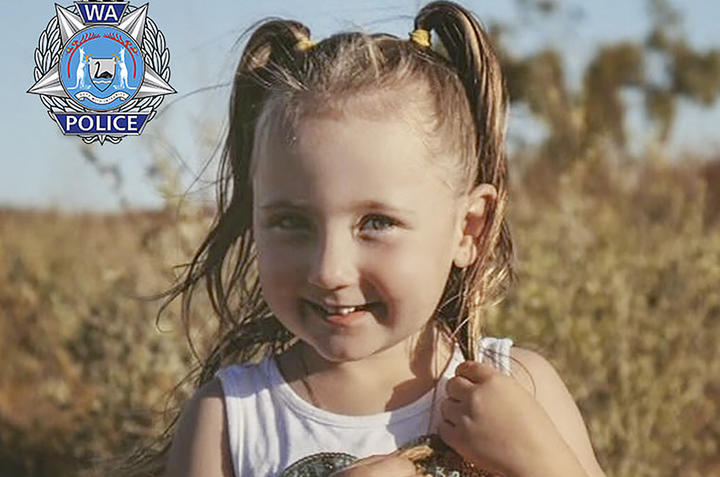 The search for Cleo has entered its 11th day after she disappeared from her family's tent in the state's Gascoyne region on 16 October.

The WA government has offered an $A1 million reward for information that leads to her being found, or to an arrest of anyone involved in her disappearance.

Cleo's mother Ellie Smith and stepfather Jake Gliddon say they awoke on the morning of her disappearance to an open tent, with no sign of the girl or her sleeping bag.

They appeared on Channel 7's Flashpoint program last night, urging the public to call in any information that could help police find their little girl.

"If you know anything, anything at all, call the police because we want our daughter back and she wants us," Smith said.

"Our daughter Isla, she needs her big sister.

Smith said the 10 days without her daughter had felt "like an eternity".

The distraught parents of four-year-old Cleo Smith have made a heart wrenching plea to the person who snatched their daughter to give her back. @sunriseon7 pic.twitter.com/BwaKWtoWXh

Forensic detectives have been at the family's house in Carnarvon looking for any evidence that could help find the missing girl.

"I guess we just hold hope that there's something there that they can find," Smith said.

Detective Superintendent Rod Wilde said searching the house was just part of the process with a major investigation like this one.

"There's no indication that the family or Cleo were being stalked in the days beforehand," he told Channel 7.

"I want to reassure the community in Carnarvon that that's not what we think happened."

Superintendent Wilde, the head of Taskforce Rodia set up to investigate Cleo's disappearance, said police still had not identified a vehicle seen leaving the Blowholes the morning the girl disappeared.

Police said witnesses saw a car turning right at the T-junction coming out of Blowholes road and heading back to Carnarvon, between 3am and 3.30am on the morning Cleo was reported missing.

"We're keen for the driver or anyone that may have been in that vehicle to come forward to the place and just to identify themselves," Wilde said.

"We just want to speak to those people. Maybe they've witnessed something themselves and [can] identify themselves to us."

Wilde said police had not been able to account for everyone who was at the scene that night.

"Because it is the nature of [it being] a holiday destination where people are travelling, there may be people that are travelling up the coast that have been off grid and not aware," he said.

Police are currently not questioning anyone of interest, with the search stretching beyond the WA border.