Teenagers from Nepal to Australia are urging leaders not to turn a blind eye after a report showing a sharp jump in heatwaves, floods and droughts in their lifetimes. 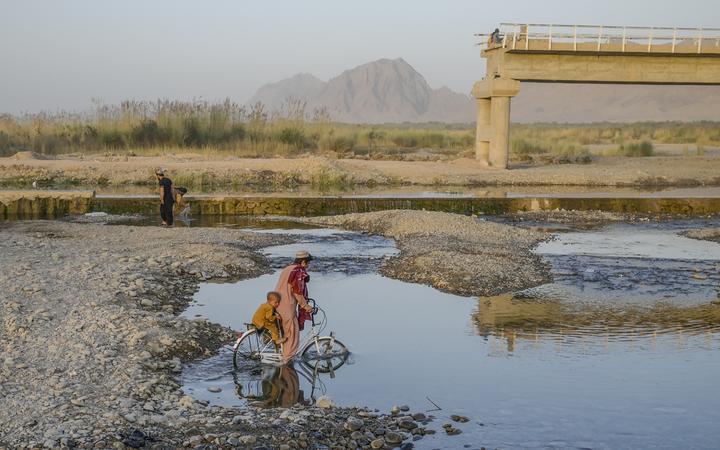 A boy and a child cross a riverbed on a bicycle in Kandahar, Afghanistan, 23 September 2021. Photo: Bulent KILIC / AFP

Children will, on average, suffer seven times more heatwaves and nearly three times more droughts, floods and crop failures due to fast-accelerating climate change, found a report from aid agency Save the Children.

Those in low- and middle-income countries will bear the brunt, with Afghan children likely to endure up to 18 times as many heatwaves as their elders, and children in Mali likely to live through up to 10 times more crop failures.

"People are suffering, we shouldn't turn a blind eye... climate change is the biggest crisis of this era," said Anuska, 15, sharing her experience of more heatwaves, intense rain and crop losses in her country, Nepal.

"I'm worried about climate change, about my future. It will almost be impossible for us to survive," she told journalists.

Save the Children did not fully identify Anuska and others who spoke alongside her for protection reasons, it said.

The research, a collaboration between Save the Children and climate researchers at Belgium's Vrije Universiteit Brussel, calculated the lifetime exposure to a range of extreme climate events for children born in 2020 compared to those born in 1960.

Also published in the journal Science, the study is based on emissions reduction pledges made under the 2015 Paris climate accord, projecting that global temperatures will rise by an estimated 2.6-3.1 degrees Celsius above preindustrial times.

This would have an "unacceptable impact on children", Save the Children said.

"The climate crisis is a child rights crisis at its core," said Inger Ashing, chief executive of Save the Children.

"We can turn this around - but we need to listen to children and jump into action. If warming is limited to 1.5 degrees, there is far more hope of a bright future for children who haven't even been born yet," she added.

The UN climate science panel warned in August that global warming is dangerously close to spiralling out of control and will bring climate disruption globally for decades to come.

Nations' pledges to cut emissions so far are inadequate to limit global temperature rise to "well below" 2C above preindustrial times, and ideally to 1.5C, as about 195 countries committed to under the 2015 Paris Agreement.

Save the Children's report found that, if global warming is kept to 1.5C, additional lifetime exposure of newborns to heatwaves would drop by 45 percent and by nearly 40 percent for droughts and floods compared with the current projected level.

"This is what's at stake when governments head to the COP26 global climate talks in Glasgow in November. These children's lives and future are all at stake," said Erin Ryan, a report author and Save the Children advisor.

Children from the Philippines to the Solomon Islands spoke of how increasing climate disasters left them vulnerable, affecting their mental health and disrupting their education.

"I was traumatised - it was really depressing," said Chatten from the Philippines, who was just eight when his home was destroyed by Typhoon Haiyan in 2013, one of the most powerful tropical cyclones in history that killed more than 6300 people.

"Everything was at its worst during those times - I don't want anyone to experience that," said the teenager, now 16.

Others said young people should pressure governments for change.

"I really want to see world leaders take action because this is putting everyone at risk," said Ella, 14, from Australia.