A suicide car bomb which exploded near the presidential palace in the Somali capital Mogadishu on Saturday has killed at least seven people. 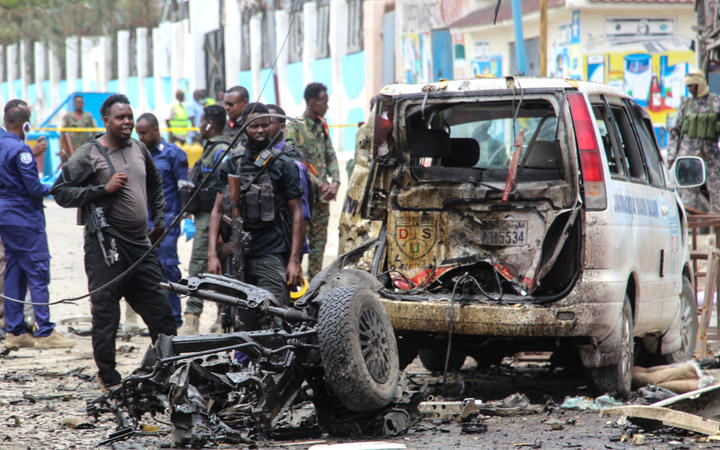 Security officers patrol on the site of the car-bomb attack. Photo: AFP

District police chief Mucawiye Ahmed Mudey told reporters that at least eight others had been injured.

In a short statement, the Islamist militant group Al-Shabab claimed responsibility for the attack.

The attack targeted a convoy heading towards the presidential palace as it waited at a busy checkpoint.

A witness told AFP that the bomb was detonated when police stopped the driver to carry out a security check.

"They normally stop to check and clear vehicles before they can pass by the checkpoint. This car was stopped by the security guards and it went off while there were several other cars and people passing by the nearby road. I saw wounded and dead people being carried," Mohamed Hassan told the news agency.

Eyewitnesses told the BBC that seven cars and three rickshaws were destroyed.

The blast comes just hours after a suicide bomber detonated an explosive near Somali military headquarters in the capital, leaving no casualties.

Many in the country have criticised Somali politicians for the country's deteriorating security situation, claiming that they are distracted by a much-delayed election process and a mounting dispute between the president and the prime minister.

Al-Shabab, which means The Youth in Arabic, is an extreme Islamist group which has been battling UN-backed government troops for more than a decade.

The jihadists controlled the capital Mogadishu until 2011 when it was pushed out by African Union troops, but it still holds territory in the countryside and launches frequent attacks against government and civilian targets in Mogadishu and elsewhere.

It advocates the strict Saudi-inspired Wahhabi version of Islam, while most Somalis are Sufis. It has imposed a harsh version of Sharia in areas under its control, including stoning to death women accused of adultery and amputating the hands of thieves.

Government officials have blamed the group for some of Somalia's deadliest terror attacks. Last year analysts at the Armed Conflict Location and Event Data Project estimated that Al-Shabab had been responsible for the deaths of over 4000 people since 2010.