Residents of south-east Australia received a shock this morning as an earthquake rippled through Melbourne and regional Victoria, reaching as a far as Canberra, Adelaide and parts of New South Wales. 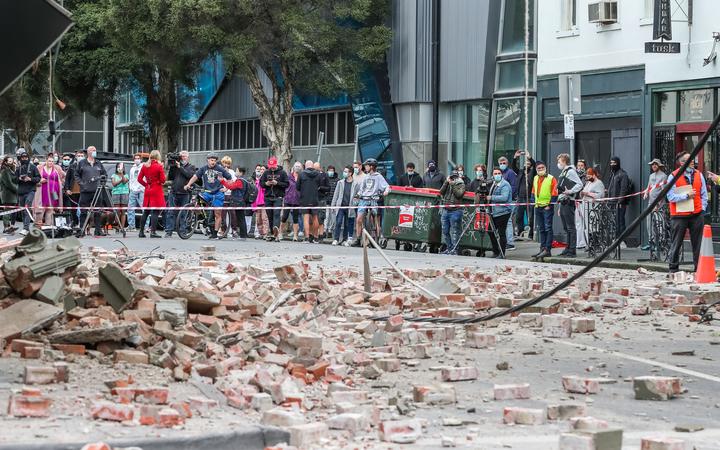 People quickly flocked to social media in the aftermath, reporting violent shaking which knocked things from walls and shelves and forced evacuations in Melbourne's CBD.

The initial quake was followed by six aftershocks, ranging from 2.4 to 4.1, according to Tim Wiebusch, chief officer of operations Victoria's State Emergency Service.

Workers who were underground at gold mine sites near the epicentre have safely been returned to the surface, two companies say.

"We've had some damage but the main thing is that everyone is safe," he said.

"There was only one person up there, they got out, so there were no injuries - just a bit of a surprise. Earthquake in Windsor, hard to believe."

Here's what we know so far.

Where did the earthquake hit?

At around 9.15am on Wednesday a magnitude-5.8 earthquake was detected in the Alpine National Park near Mansfield in Victoria's north-east.

Geoscience Australia said the quake originated at a depth of 10 kilometres. It was originally reported as a magnitude-6 quake, but was downgraded shortly after.

It was felt heavily 190 kilometres away in Melbourne, as well as in Sydney, Canberra, Adelaide, and Launceston in Tasmania.

Victoria State Emergency Service has confirmed there is no tsunami threat following the quake.

Reports suggested the tremors lasted about 20 seconds in Melbourne, and up to a minute closer to the epicentre.

"It shook here in the northern suburbs of Melbourne for about 15-20 seconds so it's quite a significant earthquake," Seismology Research Centre head Adam Pascale said.

Video from the ABC studio in Melbourne showed the building shaking.

A magnitude six #Earthquake has rattled Melbourne and regional Victoria.
This is the moment when News Breakfast presenters @mjrowland68 and @Tonaaayy_ were rocked by it. pic.twitter.com/Z4gz0sWJve

The quake is potentially the largest one recorded in eastern Australia since European settlement, according to Geoscience Australia. 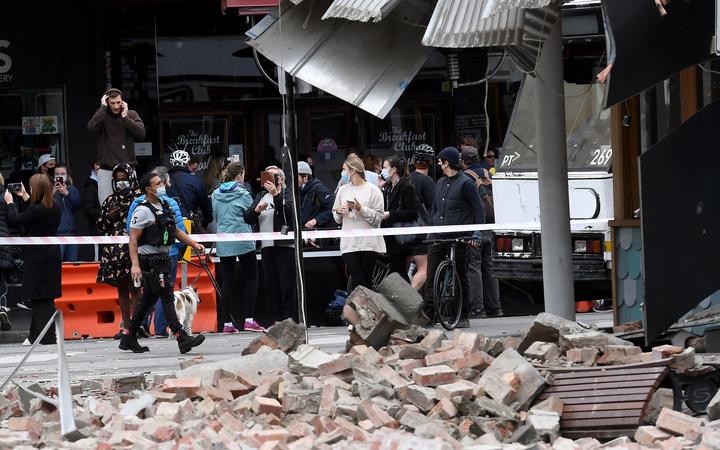 Residents gather near a damaged building in the popular shopping Chapel Street in Melbourne. Photo: AFP

Victoria's State Emergency Service had received about 26,000 reports from people who had felt the quake as of 10.30am.

A second magnitude-4 earthquake was recorded in the vicinity of the first about 15 minutes later at a depth of 12km.

Landslides have also been recorded in the state's north-east alpine region.

No reports of serious injuries

There have so far been no reports of serious injuries or fatalities as a result of the quake.

Speaking from the United States on Wednesday Prime Minister Scott Morrison said the event was "very disturbing" but there were no reports of fatalities.

The federal government was standing by to support Victorians as required, he said, after communicating with Premier Daniel Andrews over text.

Following the tremors, Andrews tweeted: "Yes, that was an earthquake."

He urged Victorians to go to the Emergency Victoria website for the latest information.

Workers who were underground at gold mine sites near the epicentre of the earthquake have safely been returned to the surface, two companies say.

The SES said there had been damage to some buildings in the town of Mansfield, but there are no reports of injuries or damage at two nearby mines.

Mining company Kaiser Reef - which operates the A1 gold mine, about 40km from Mansfield - said about 12 miners were underground at the time of the quake, but they had been safely evacuated.

The company said operations had been put on hold as detailed checks were carried out, but that there was no visible damage to the site.

White Rock Minerals, which operates the Woods Point gold mine about 60km from the quake's epicentre, said there had been "no immediate signs of damage" despite "significant shaking".

Nine workers who were underground at the time have been accounted for, and are now all safely back at the surface, the company said.

Managing director Matt Gill, who was on site, said the building he was in "violently started shaking".

"It was a bit nerve-racking for sure and making sure everybody was safe was the first priority."

Buildings in Melbourne have been damaged

There have been reports of damage throughout Melbourne, with photos showing a partially collapsed building on Chapel Street in the inner city.

Photos and videos of the street show bricks and debris strewn across the street, after the top floor of Betty's Burgers in Prahran partially collapsed.

Apartment buildings in inner Melbourne have also been evacuated and parts of the city experienced power outages in the immediate aftermath.

Acting Premier James Merlino said this evening that a statewide Watch and Act warning was in place for Victoria.

He said most of the power outages in metropolitan Melbourne had been resolved and Beechworth hospital had been able to switch to backup generators when it lost power this morning.

Mansfield resident Karen McGregor said windows on the FoodWorks grocery store had buckled but there was no significant damage to the building.

"The windows started shaking, the walls, and everything on the desk, it was really quite scary," she said.

Experts have warned Victorians to prepare for aftershocks, which could continue for months.

"There is a small likelihood that there could be a larger event but we'll see as we go," Pascale said.

Emergency Victoria has urged residents to expect aftershocks, stay away from damaged buildings and avoid driving unless absolutely necessary.

If people are out and about they urged people to "stay safe and use common sense".

But while hundreds of aftershocks could be expected, many won't be felt by humans.