Victoria's police union says it fears its members have "become the punching bags" for frustrated Victorians in lockdown looking for a target. 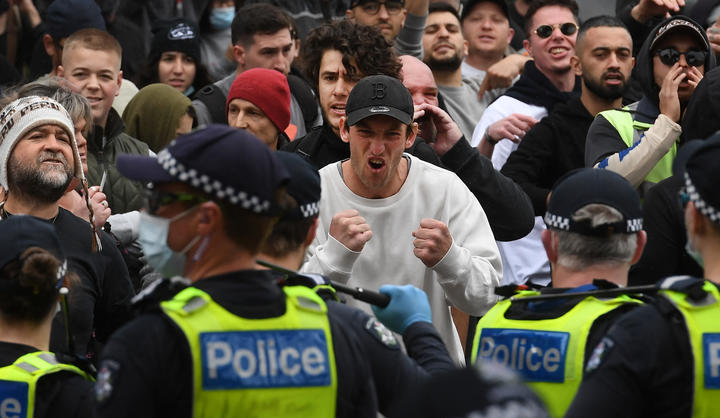 Protesters march through the streets during an anti-lockdown rally in Melbourne on 18 September. Photo: AFP

Ten officers were injured and six taken to hospital after hundreds of demonstrators at violent anti-lockdown protests attacked police on Saturday.

This morning, Victoria Police said all members had been discharged from hospital.

Bottles and stones were thrown at some officers, while Commander Mark Galliott said others were trampled, suffering broken bones and severe facial injuries including a broken nose.

"It's utterly disgraceful. What we saw yesterday were just acts from criminals. They weren't protest activities, they were criminal acts," Gatt said.

"We can't stand for that, we can't tolerate that and it's got to stop."

Victoria Police had taken the extraordinary move to temporarily shut down public transport into the CBD in a bid to prevent thousands of people gathering and creating a COVID-19 superspreader event.

But anti-lockdown demonstrators met police around midday in Richmond, with officers making more than 230 arrests.

Police estimate between 500 and 700 protesters marched through the streets of Richmond during the demonstration. 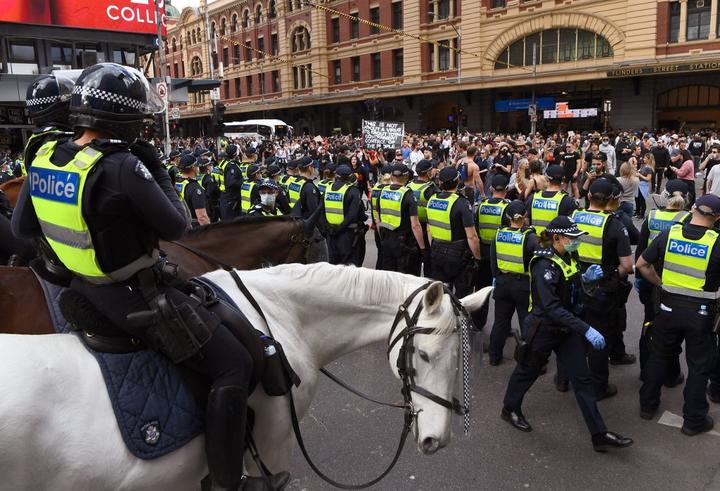 Police face off with protesters in Melbourne. Photo: AFP

Gatt said while Victoria Police achieved its objective of stopping people travelling to the city, certain elements of the operation could have been better executed to keep officers safe.

"That's something that we struggle with and it's something that will challenge us, and in the days and hours ahead we'll talk to Victoria Police about how we can do things better to make sure that that isn't an outcome of future protester demonstration activity," he said.

"When you have situations where large numbers of members have been injured, you're duty bound to look at that."

Union defends officers' use of force against protesters

Videos have circulated on social media showing a woman being doused in capsicum spray after falling to the ground, drawing questions on whether all officers used proportionate force.

Gatt vehemently rejected suggestions that the force used was not justified. 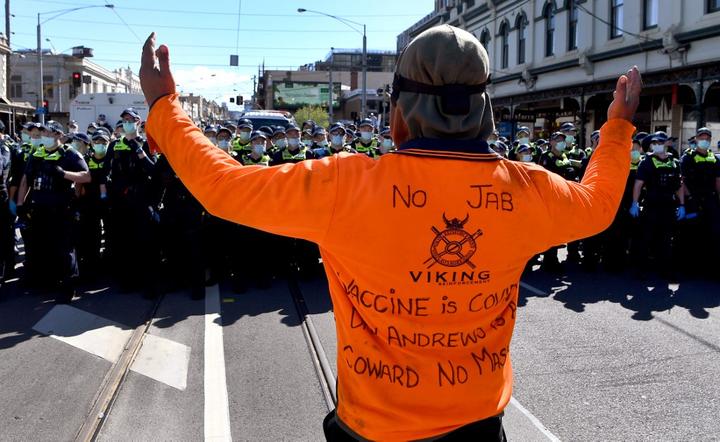 A protester confronts the police during an anti-lockdown rally in Melbourne on 18 September, 2021. Photo: AFP

"I'm not copping that one bit. They came to that demonstration with the intent to hurt our members, they succeeded against 10 of them," he said.

"Those actions wouldn't have occurred if those people didn't attend an unlawful protest."

Gatt said the proportion of police response was not up for a moral debate.

"They [the protesters] have to look at themselves, we need to stop nancy-pancying around these people. We need to stop this needless debate about the proportionality issues of what's right and what's wrong," he said.

The large mobilisation of around 2,000 police officers at yesterday's protests is expected to have flow-on effects for staff availability in the coming weeks.

Gatt urged Victorians to consider the impact of the protests on the state's stretched police force.

"If there is continued demand on Victoria Police, you would have to expect there is going to be continued impact on service delivery, it's a natural consequence."