The Victorian government is shutting down all construction sites in metropolitan Melbourne and all other locked down local government areas in response to violent protests on Monday. 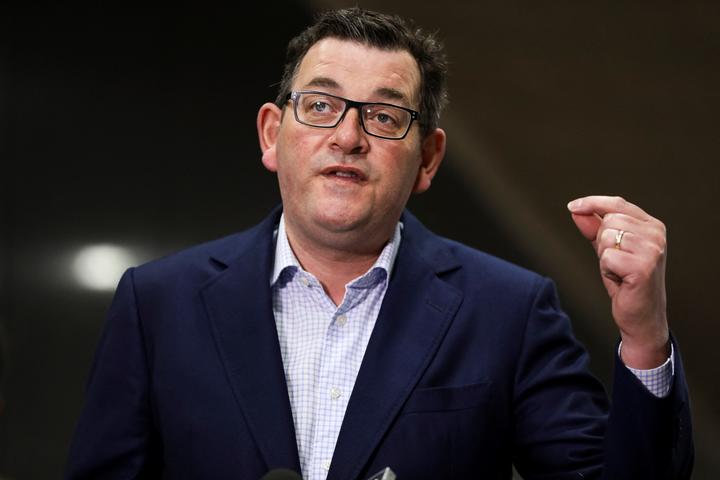 The Victoria government of premier Daniel Andrews went into crisis talks after the violent protests outside the construction union office on Monday. Photo: AFP

The Andrews government engaged in crisis talks on Monday night with the Construction, Forestry, Maritime, Mining and Energy Union (CFMEU) following the heated brawls outside the union's Elizabeth Street offices in Melbourne's CBD.

Protesters rallied against the Victorian government's mandate requiring all construction workers to have at least one Covid-19 vaccine dose by 23 September.

The shutdown is scheduled to last for two weeks.

If regional LGAs emerge from lockdown in sooner than two weeks, construction sites will be allowed to reopen and operate as normal.

The only permitted exception to the lockdown will be to ensure the safe closure of a site and to conduct urgent and unavoidable repairs.

An amnesty will be put in place so limited numbers of workers can attend construction sites in order to shut them down safely.

Sites will only be permitted to reopen when they can demonstrate compliance with the public health orders.

Minister for Industrial Relations Tim Pallas said the move came as a direct result of poor behaviour from sections of the industry.

"We've been clear: if you don't follow the rules, we won't hesitate to take action. We have seen widespread noncompliance across the industry and that's why we're taking necessary steps to protect every single Victorian," Pallas said.

"We put the industry on notice just a week ago, we have seen appalling behaviour on site and on our streets, and now we're acting decisively and without hesitation."

The Victorian Opposition has called for the state government to immediately reverse its decision to shut down the industry.

Shadow Minister for Industry Bridget Vallence said there was no justification for the 'panicked decision' and argued it should be targeted at the areas that represent the most risk in the industry.

"This is a drastic move that will put tens of thousands of Victorians out of work and cost billions in lost productivity."

Vallence said the entire construction industry should not be punished for the actions of a 'very small minority'.

She blamed the protest on "extremists and conspiracy theorists" who she said were "endangering the lives of their fellow citizens."

McManus said she believed the protests were organised by people outside of the construction sector.

"We know from social media networks that the same people who were at the rallies on the weekend were asking people to come to these ones and to dress up in high vis," she said.

"That's not to say that there weren't people there who were also construction workers, there were.

"But the people organising and orchestrating it were people with other motives," she said.

McManus said people at the CFMEU protest were not wearing a mask and she worried it could become a super spreader Covid event.

She blamed the industry's shutdown on groups which she said had "undermined" health advice.

"We don't want any industry shut down but it is a pandemic and if you can't make an industry safe, well this is what medical experts are doing," she said.

"This is very unfortunate, unions have worked very hard to try and keep construction safe."

The Victorian Building Industry Group of Unions released a statement criticising the government's "unrealistic and blunt approach" to Covid regulations, saying it has undermined the vaccination rollout.

"The Building Industry Group of Unions maintains the view that the construction industry would have voluntarily reached high levels of vaccination without a heavy-handed approach," a BIGU spokesperson said.

"This heavy-handed mandate by the Chief Health Officer, which was implemented with no notice, has only served to drive many people towards the anti-vax movement."

The group pleaded with the state government to reconsider the measures and facilitate a way to get workers back onto work sites.

"We call on the Andrews government, Chief Health Officer, and the Department of Health to come to a sensible return to work scenario that accommodates the reality of our industry and respects the workers who have built this city."

More than 500 people gathered outside the CFMEU's Elizabeth Street office to protest mandatory vaccinations for construction workers on Monday.

Union secretary John Setka tried to speak to the crowd but when some in the crowd grew agitated, he asked workers, "Do you want to shut the whole building industry down?"

The protesters started chanting, "shut it down, shut it down," and throwing insults at Setka.

Tensions rose further and Setka had a crate and bottles thrown at him.

Security guards were forced to take him inside and the doors to the headquarters were locked.

Setka told 3AW on Monday that he believed the CFMEU was being unfairly targeted for decisions made by the Victorian government.

"We're virtually being blamed for everything which is totally untrue. All we've ever done is try and keep our industry working safely," he said.

On Monday Premier Daniel Andrews said it was an "illegal gathering" but he did not conclude that a sizeable number of construction industry workers had no respect for coronavirus restrictions.

"What I would say is that protests don't work. Getting vaccinated works, following the rules works. That's how you stay open, that's how you get open if you're not open now," he said.