Police and media vastly outnumbered protesters outside the US Capitol on Saturday at a sparsely attended rally held in support of those who illegally breached the building on 6 January, trying to overturn former President Donald Trump's election defeat. 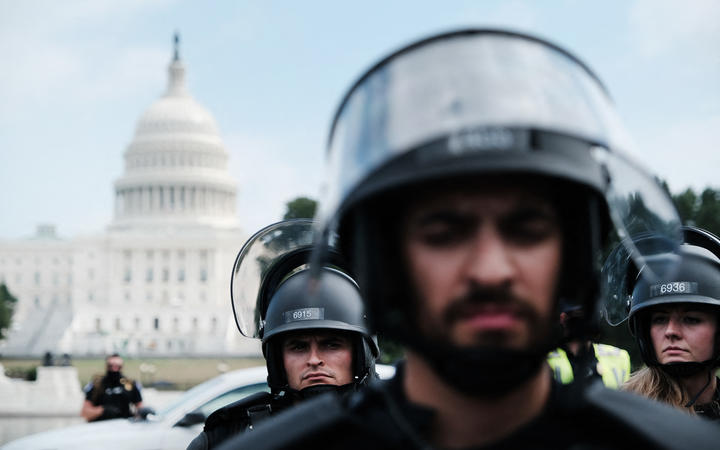 About 100 to 200 protesters showed up, some carrying the flags of the right-wing group Three Percenters over their shoulders. It was far fewer than the 700 people organizers had expected or the thousands who brought mayhem to the Capitol on 6 January.

Organisers of the "Justice for J6" rally called for a peaceful event, but US Capitol Police Chief J Thomas Manger told reporters on Friday there had been threats of violence linked to the rally, some targeting individual members of Congress, and police were bracing to prevent clashes between Trump supporters and opponents.

One hundred National Guard troops were on standby at the Capitol, hundreds of officers patrolled the grounds and a 2.4 metre security fence was reinstalled, reflecting unease about a potential repeat of the incursion into the buildings.

As part of an effort by some of Trump's far-right supporters to rewrite the history of the deadly mob assault on the Capitol that was captured in graphic video, speaker after speaker insisted that hundreds of rioters arrested for their actions that day were "political prisoners" who committed no violence.

Prosecutors and legal experts say the cases are being handled properly.

"This is about justice and disparate treatment," said Matt Braynard, a rally organizer and supporter of Trump's false claims that his defeat was the result of widespread fraud. 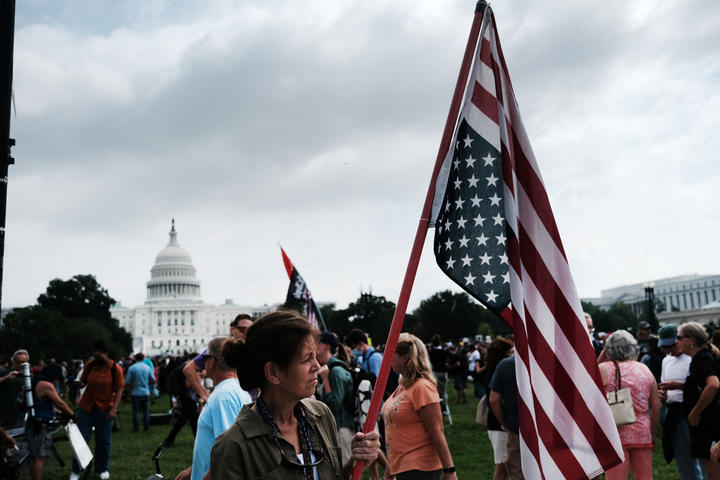 Supporters of those charged in the 6 January attack on the US Capitol attend the Justice for J6 rally on Saturday. Photo: AFP/Getty

While crowds were small, passions rose at times, with sporadic yelling matches breaking out between participants in the rally and counter-demonstrators. Police on bicycles moved in to break up some of these squabbles.

Capitol Police reported four arrests, including a man armed with a handgun spotted in the crowd, though they said it was "not clear why the man was at the demonstration." Officers in riot gear also removed one man from the rally who had a large knife strapped to his hip.

Tony Smith, 40, of Upper Marlboro, Maryland, said he had come to voice his support for a fair judicial process for those charged in the breach of the Capitol.

More than 600 people have been charged with taking part in the 6 January violence, which followed a speech by Trump at a nearby rally reiterating his false claims that his election loss was the result of widespread fraud. Those claims have been rejected by multiple courts, state election officials and members of Trump's own administration.

Rioters that day battled police, beating them with sticks and metal barricades, smashed their way through windows into the Capitol building and ran through the halls, sending lawmakers and then-Vice President Mike Pence running for safety.

Four people died on 6 January, one fatally shot by police and three from medical emergencies. A Capitol Police officer who had been attacked by protesters died the day after, and four police officers who took part in the defence of the Capitol later committed suicide.

Almost 50 people have so far pleaded guilty to charges related to the violence, nine admitting to committing felonies. The vast majority of defendants have been released awaiting trial but about 75 are still in custody, according to court documents.

Members of the right-wing groups the Proud Boys, Oath Keepers and Three Percenters are among those charged with storming the building.

"Let them go, let them go," the crowd occasionally chanted during the rally, which lasted just over an hour.

But Eric Lamar, 64, a retired firefighter in Washington, DC, said he came to the Capitol to counter "false narratives" from Trump supporters about the 6 January events.

"It breaks my heart," Lamar said after hearing another retired firefighter claim that the riot was a "false flag," a conspiracy theory wrongly claiming that the event was staged. "There is no question that what happened on 6 January is the work of supporters of Donald Trump who decided falsely and without evidence that the election was stolen."

Trump called Saturday's rally a setup, and said media would use it as an excuse to bash Republicans regardless of its outcome, according to an interview on Thursday with The Federalist, a conservative news website.

Unlike on 6 January, when Congress was in session to certify Biden's election, the Capitol was largely empty on Saturday, with most members out of town.

Authorities, who had made clear they were much better prepared after being caught without enough forces to deploy quickly in January, took no chances.

National Guard troops were stationed in and around the Capitol from early January through late May, with as many as 5200 troops in place at the mission's peak.