New South Wales has reported 199 locally acquired cases of Covid-19 in the 24 hours to 8pm yesterday. 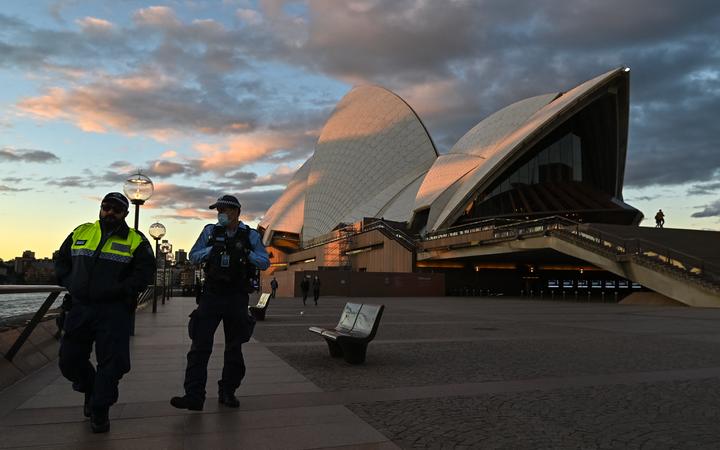 Greater Sydney is in lockdown until at least 29 August. Photo: AFP

That is down from 207 a day earlier, as officials scramble to bring under control an outbreak of the Delta variant in Sydney.

Of the new cases, at least 50 spent time in the community while infectious, state Premier Gladys Berejiklian told reporters in Sydney.

Total cases in the year's worst outbreak have topped 3800 since the first was detected in mid-June.

Berejiklian revealed she wants to see 6 million jabs administered in NSW by the end of August.

About 3.9m doses have been put in arms in the state so far.

Greater Sydney's lockdown is due to end on 29 August, at this stage.

"Six million jabs is roughly half the population with at least one or two doses," she said.

"That gives us additional options as to what life looks like on 29 August."

Queensland has recorded 16 locally acquired cases as the south-east enters its third day of lockdown.

All are linked to the Indooroopilly State High School cluster which is now at 47 cases in total.

Deputy Premier Steven Miles said in the past 24-hour period, 34,718 tests were conducted which he described as an excellent result.

Queensland's Chief Health Officer Dr Jeannette Young said it was "good" the cases were linked to the one cluster but was concerned about the origins of the outbreak.

The new cases were all in quarantine for their infectious period and linked to known infections, the department of health said.

The most recent outbreak, which began on 12 July, is now linked to 220 local coronavirus cases.

Victoria will tighten the "border bubble" rules with New South Wales from 11.59pm tonight, a week after the state's fifth lockdown ended.