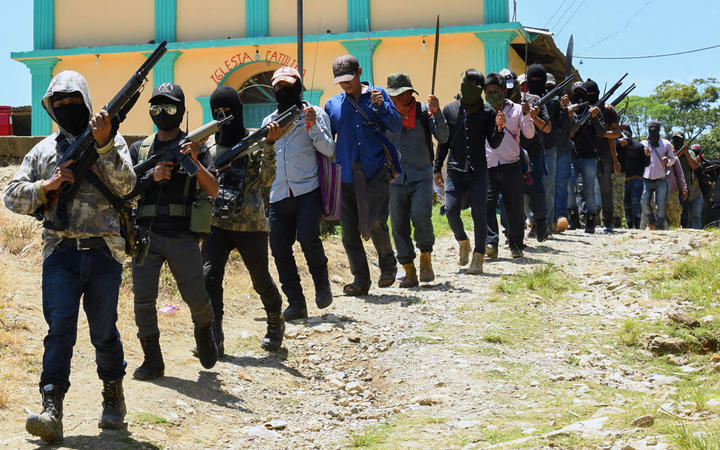 The violence in the indigenous Tzotzil community of Pantelhó earlier this week came less than two weeks after a group of hooded men, calling themselves El Machete, took up arms in nearby Chenalhó to confront drug-trafficking gangs. It was unclear how many members El Machete has.

Reuters images of Pantelhó after the fires showed the charred remains of buildings, vehicles and houses, with hooded men armed with machetes standing nearby.

"There is no security here, there is no peace, there is no tranquility," said an unidentified El Machete member, his face covered, in a speech before a crowd on Tuesday afternoon in the main square of Pantelhó.

"There is only fear, crying and fear, extortion and intimidation," he said.

He said residents of the area, not El Machete, were behind the fires. Two villagers in Pantelhó agreed. Local men targeted the houses of people suspected to have links with drug traffickers, the two villagers said.

The Fray Bartolomé de las Casas Human Rights Centre last week said that more than 3000 people in the area have had to abandon their homes in recent months due to incursions by criminal groups seeking to take over the territory.

Many tens of thousands of people have been killed or disappeared in Mexico since the government embarked on a "war on drugs" in 2006.

Mexicans in different parts of the country have responded to spiraling violence and weak government response by forming self-defense militias.

Asked about the emergence of El Machete recently, Mexican President Andres Manuel Lopez Obrador said he was against groups that take "justice into their own hands."