The Biden administration plans to release by the end of June a list of corrupt Central American officials who may be subject to sanctions, a US special envoy told Reuters, as Washington seeks to cut back on a root cause of increased migration to the US-Mexican border. 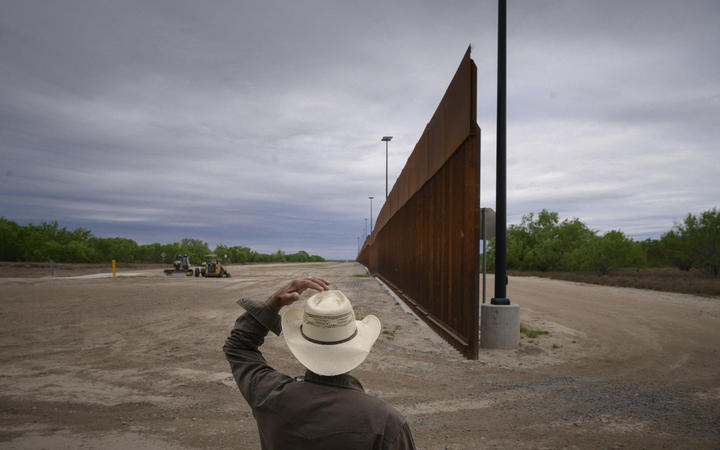 A Texas rancher stands before a portion of the unfinished border wall that former US president Donald Trump tried to build. Photo: AFP

US officials see corruption as one of the main drivers for the flow of migrants - along with poverty, gang violence and the fallout from hurricanes last year - and want to make sure a $4 billion aid package being put together for the region does not fall prey to graft.

"That's the mandate from Congress. We have a responsibility and we're going to meet it, Zuniga said in an interview on Wednesday. That tracks with our commitment to defend those who are combating impunity."

Zuniga was referring to a law sponsored by then-US Representative Eliot Engel and enacted by Congress in December that requires the State Department to assemble within 180 days a so-called Engel List of corrupt actors in the Northern Triangle.

The administration, he said, would comply with that congressional requirement. Those targeted could then be subject to bans on travel to the United States, seizing of US property and prohibitions on Americans doing business with them.

Central American officials may be more likely to have assets in the United States, given the geographic proximity and historical relationships, than those from countries that have fewer US financial links.

Another path for sanctions in Central America could be the use of so-called Global Magnitsky measures, which the United States has imposed for years on those accused of corruption, human rights abuses and anti-democratic actions around the world.

Zuniga declined to name those who might face sanctions.

Asked whether Honduran President Juan Orlando Hernandez might be targeted, Zuniga said: "I'm not going to comment on him because of the Department of Justice engagement on his case." Hernandez is under U.S. investigation for alleged links to drug cartels. He denies any involvement in drug smuggling.

Biden's aides have spoken out in recent days against Guatemalan lawmakers' refusal to swear in a corruption-fighting judge and the removal of top judges and the attorney general in El Salvador.

Zuniga spoke just days ahead of a virtual meeting between Vice President Kamala Harris, tasked by Biden to lead diplomatic efforts to curb unauthorized migration, and Mexican President Andres Manuel Lopez Obrador. She plans to visit Mexico and Guatemala on 7 and 8 June.

The influx at the US-Mexican border, many of them Central American migrants, has emerged as Biden's biggest political weakness in the early months of his presidency, opinion polls show, as he seeks to reverse the hardline immigration policies of his predecessor, Donald Trump.

Harris and Lopez Obrador are expected on Friday to discuss how to stem the movement of migrants to the border.

Among Harris' initiatives is to try to get US companies to invest more in the impoverished Northern Triangle.

Zuniga said a lot of US firms are interested in doing more business in the region but that there is investment hesitancy, because of local corruption, poor infrastructure and other problems.

"Companies see those kinds of problems, and they hold back," he said.

Zuniga said US firms are also concerned about the strength of judicial systems in the Northern Triangle and regulatory structures that are "very difficult to navigate" or "designed to favour local companies over foreign investors."

Ahead of Harris' talks with Lopez Obrador, Zuniga stressed an ongoing partnership with Mexico on migration issues, saying: "We want to work closely with Mexico on Central America".