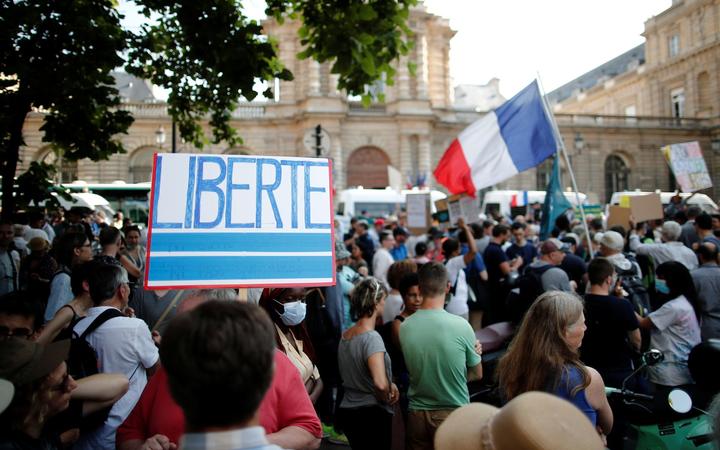 More than 160,000 people have taken to the streets in France to demonstrate against Covid-19 measures. Photo: Reuters

Police sought to push back demonstrators near the capital's Gare Saint-Lazare railway station after protesters had knocked over a police motorbike ridden by two officers, television pictures showed.

Images showed a heavy police presence on the capital's streets. Scuffles between police and demonstrators also broke out on the Champs-Elysees thoroughfare, where teargas was fired and traffic was halted, the pictures showed.

Across France, protests were planned in cities including Marseille, Montpellier, Nantes and Toulouse.

An official with France's interior ministry said 161,000 people had demonstrated across the country on Saturday, up from 114,000 a week earlier.

French lawmakers are due to vote this weekend on a bill drafted by the government aimed at setting up a health pass and mandatory vaccination for health workers.

Greek police used teargas and water cannon to disperse people who had gathered in central Athens on Saturday to protest against mandatory Covid-19 vaccinations.

More than 4000 people rallied outside the Greek parliament for a third time this month to oppose mandatory inoculations for some workers, such as healthcare and nursing staff.

A police official, who asked not to be named, said some protesters had thrown petrol bombs, prompting the police to respond with tear gas.

A rally on Wednesday was also marred by violence.

Recent polls showed the majority of Greeks would get the shot against the Covid-19 which has claimed 12,890 lives in Greece since the pandemic broke out last year. About 45 percent of a population of 11 million are fully vaccinated.

Greece has ordered the vaccination of healthcare and nursing home staff as cases have risen and urged school teachers to get the shot in time for the start of the school year in September.

Nearly 2500 cases were reported on Saturday, bringing the total number of infected people to 474,366.