Raul Castro was among thousands who attended a government-organised rally in Havana on Saturday local time to denounce the United States trade embargo and reaffirm their support for Cuba's revolution, a week after unprecedented protests rocked the communist-run country. 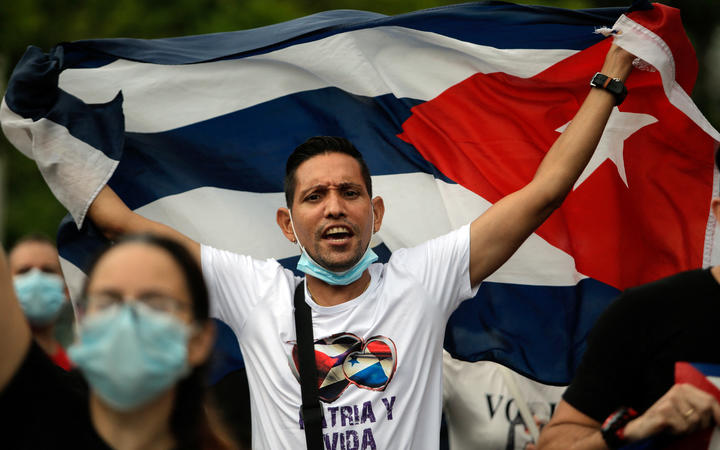 Cuban residents in Panama protest against the Cuban government near the Cuban Embassy in Panama City today. Photo: AFP or licensors

Government supporters gathered on the city's seafront boulevard before dawn to wave Cuban flags and photos of late revolutionary leader Fidel Castro and his brother Raul.

The latter retired as Communist Party leader in April but promised to continue fighting for the revolution as a "foot soldier".

The rally was a reaction to demonstrations that erupted nationwide last Sunday amid widespread shortages of basic goods, demands for political rights and the island nation's worst coronavirus outbreak since the start of the pandemic.

The government admitted some shortcomings this week but mostly blamed the protests on US-financed "counter-revolutionaries" exploiting economic hardship caused by US sanctions.

President Miguel Diaz-Canel, who also heads the Communist Party, told the crowd that Cuba's "enemy has once again thrown itself into destroying citizen's sacred unity and tranquility."

He said it was no small matter to call a rally as the country saw increasing numbers of Covid cases: "We convened you to denounce once more the blockade, the aggression and terror." 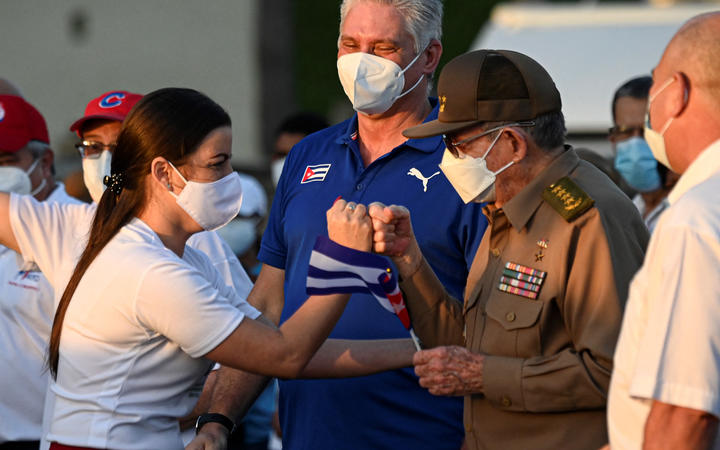 "This revolution will continue for a long time," said Margaritza Arteaga, a state social worker who attended the rally in Havana.

Workers had been convened by neighbourhood block committees, known as the Committees for the Defence of the Revolution, she said, and a state bus had picked her up at 4am.

Shortly before the rally in Havana officially began, authorities removed a man shouting anti-government slogans including "freedom" from the crowd.

The number of those detained during or after protests has grown as new reports trickle in amid irregular outages in internet and messaging applications on the island where the state has a monopoly on telecommunications.

The latest tally from exiled rights group Cubalex put those detained at 450, although some have since been released. Activists have accused authorities of repression as some videos have emerged on social media of police beating protesters.

The government has not yet given official figures for those detained although it has said it has arrested those it suspects of instigating unpatriotic unrest or of carrying out vandalism.