This week, President Joe Biden signed the Juneteenth National Independence Day Act, which establishes a holiday that commemorates the end of slavery in the US. 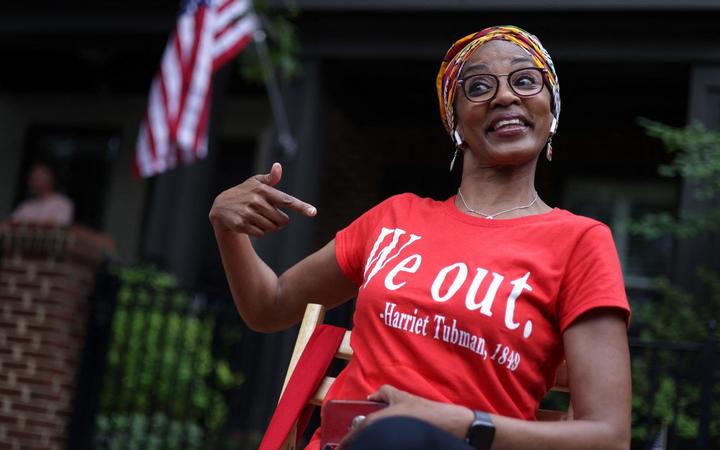 Janice Lloyd points to a quote that reads "We out" on her T-shirt as she watches a parade to celebrate Juneteenth in Annapolis, Maryland. Photo: AFP / Getty Images

"I've only been president for several months, but I think this will go down, for me, as one of the greatest honours I will have had as president," Mr Biden said at the signing event on Thursday.

So what is Juneteenth, how did it become a holiday and what do people do to celebrate it?

What is the origin of Juneteenth?

On 19 June 1865 - months after the northern US states defeated the South in a civil war fought over slavery - enslaved African-Americans in Galveston, Texas, were told they were free.

The day became known as Juneteenth, a word created by joining the words "June" and "nineteenth" together.

The declaration by General Grainger to bring the Emancipation Proclamation into effect in Texas is seen by many as the end of slavery as it finally brought the practice to an end in the last state still holding the enslaved. 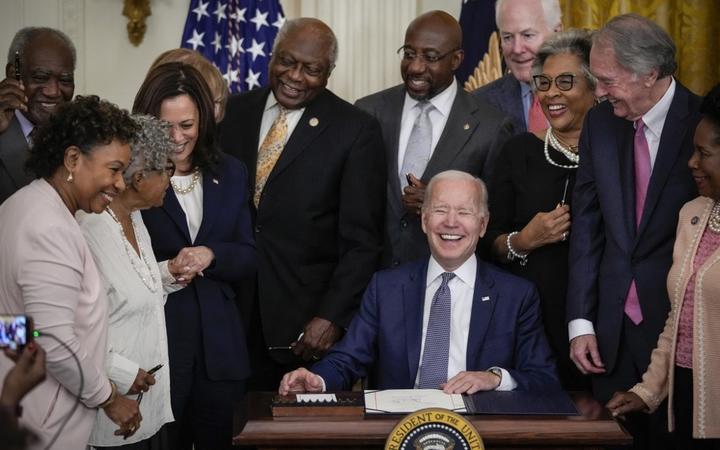 US President Joe Biden signs the Juneteenth National Independence Day Act into law in the East Room of the White House on 17 June in Washington, DC. Photo: 2021 Getty Images

How did it become a federal law?

When he was senator of Illinois, Barack Obama co-sponsored legislation to make Juneteenth a national holiday, but the law was never passed - even after he became president.

This year, companies such as Nike, Uber, Twitter and many others have announced they are giving their employees a paid day off for Juneteenth.

Governors in some states, including New York and Virginia, have also declared it a holiday for state employees.

On Wednesday, the US House of Representatives backed the legislation by 415-14, a day after it was unanimously approved by the Senate. With the signature of President Biden, it has become law.

Fourteen House Republicans voted against the bill. One lawmaker from Montana said the legislation was all about "identity politics". A Kentucky opponent of the bill said its establishment will "create confusion and push Americans to pick one of those two days as their independence day based on their racial identity".

It is the first new federal holiday since Martin Luther King Jr Day was established in 1983.

We cannot rest until the promise of equality is fulfilled — for every one of us, in every corner of this nation.

That is the meaning of Juneteenth.

The effort to have Juneteenth declared a federal holiday was decades in the making.

In 2016, 89-year-old Opal Lee walked from Texas - where Juneteenth has been a state holiday since 1980 - to Washington DC in an effort to encourage lawmakers.

She walked 4km each day - representing the two and a half years that it took for enslaved people in Texas to learn that they had been freed.

"I've got so many different feelings all gurgling up in here," Ms Lee said after Congress approved it as a federal holiday. "I don't know what to call them all. I am so delighted to know that suddenly we've got a Juneteenth.

"It's not a Texas thing or a black thing. It's an American thing." 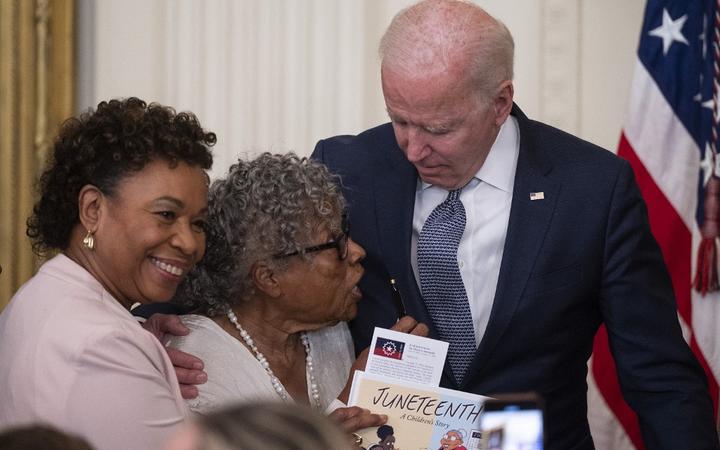 Opal Lee (2nd L), the activist known as the grandmother of Juneteenth, speaks with US President Joe Biden after he signed the Juneteenth National Independence Day Act, in the East Room of the White House, June 17, 2021, in Washington. Photo: AFP

What is different this year?

The ending of slavery did not do away with racism, and in the years after so-called Jim Crow laws were created to separate black people from white society and limit their civil rights.

The legacy of those laws is still being dismantled.

The death of George Floyd, Breonna Taylor and other African-Americans at the hands of police have led to anti-racism protests by followers of the Black Lives Matter movement.

In addition, some Democrats argue that recent Republican state election reforms making it harder to vote are an effort to disenfranchise minority voters who often lean Democratic.

It also comes as a fierce cultural debate rages over the history of slavery and how it should be taught in American schools. Some Republican-controlled states have sought to have schools teach the "patriotic education" favoured by Mr Trump, and limit or prohibit curriculums that seek to re-examine the importance of slavery to the foundation of the country. 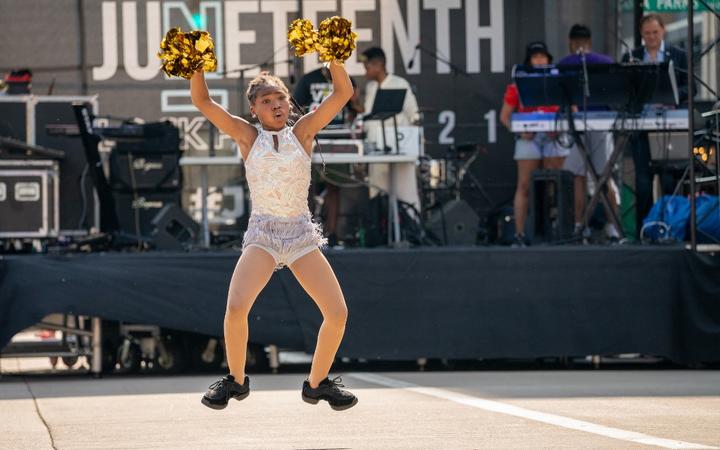 How is it celebrated?

Juneteenth celebrations and traditions vary across the US. In some states there are parades, and people gather for food and to play games.

As well as public readings and singing, picnics and church services, in some states rodeos, contests, concerts and parades are also organised.

Food also plays an important part, with barbecues being one of the most popular ways of marking the day with family and friends.

The most famous dish is called "the Marcus Garvey salad", named after the black activist and made with red, green, and black beans.