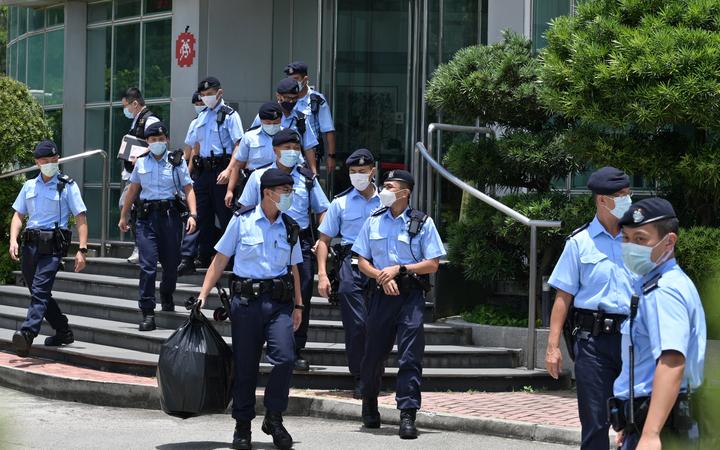 Police also arrested the editor-in-chief and four other executives at their homes. It also froze $HK18m ($NZ3.3m) of assets owned by three companies linked to Apple Daily.

The paper is owned by Jimmy Lai, who is in jail on a string of charges.

Apple Daily is known to be critical of the mainland Chinese leadership.

In a press briefing, police said that since 2019, Apple Daily had published more than 30 articles calling on countries to impose sanctions on Hong Kong and mainland China.

It said the assets of Apple Daily Limited, Apple Daily Printing Limited and AD internet Limited had been frozen.

Dozens of prominent activists have been arrested since the national security law was introduced last year.

Police entered the Apple Daily office premises about 23:30 GMT Wednesday and blocked off all entrances and exits.

Police said in a statement that they conducted a search operation at a media company, adding that their warrant "covered the power of searching and seizure of journalistic materials". 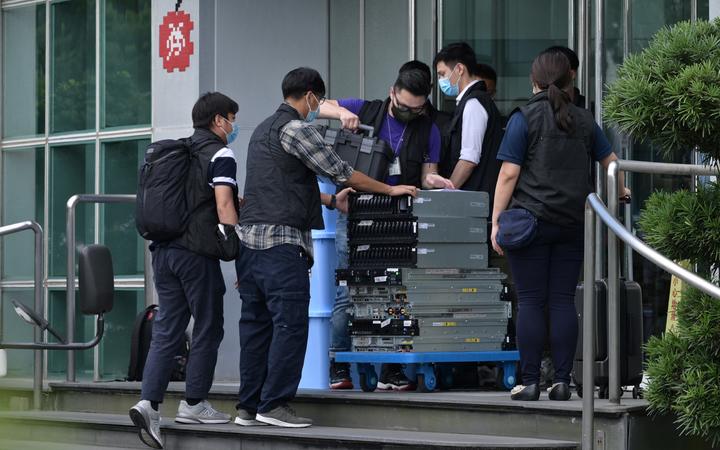 Police handle evidence taken from the Apple Daily newspaper offices before being put into a waiting vehicle in Hong Kong on 17 June, 2021. Photo: AFP / Anthony Wallace

Police did not name those arrested but confirmed that the five people, aged between 47 and 63, were arrested for "collusion with a foreign country or with external elements to endanger national security".

This is the second raid to take place in Apple Daily in under a year - a raid last August saw 10 people arrested including Lai and his sons.

Who is Jimmy Lai?

Lai is one of the most prominent supporters of Hong Kong's pro-democracy movement.

Estimated to be worth more than $1bn, he made his initial fortune in the clothing industry and later ventured into media and founded Next Digital. 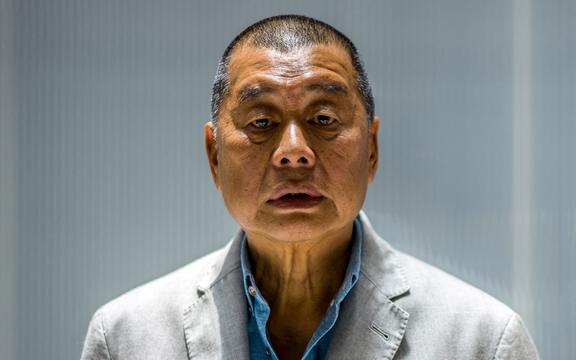 In his last interview with the BBC before he was sentenced to jail, he said he would not give in to intimidation.

"If they can induce fear in you, that's the cheapest way to control you and the most effective way and they know it. The only way to defeat the way of intimidation is to face up to fear and don't let it frighten you," he said.

He is currently facing time in jail for a series of charges, including participating in an unauthorised assembly in 2019.

What is the national security law?

The law was introduced in 2020 in response to massive pro-democracy protests that swept the city state the previous year.

It essentially reduced Hong Kong's judicial autonomy and made it easier to punish demonstrators. It criminalises secession, subversion and collusion with foreign forces with the maximum sentence life in prison.

Beijing said the law would target "sedition" and bring stability, but critics have said it violates the agreement under which Britain handed back Hong Kong to China in 1997.

The handover agreement saw the creation of the Basic Law under the "one country, two systems" principle.

This is supposed to protect certain freedoms for Hong Kong: freedom of assembly and speech, an independent judiciary and some democratic rights - freedoms that no other part of mainland China has.

Fears that this model was being eroded were what led to the huge pro-democracy protests in 2019.

Since the law was enacted in June, more than 100 people have been arrested under its provisions, including Lai.