The G7 summit has started in Cornwall, with Boris Johnson urging fellow leaders to "build back better" as the world recovers from the Covid pandemic. 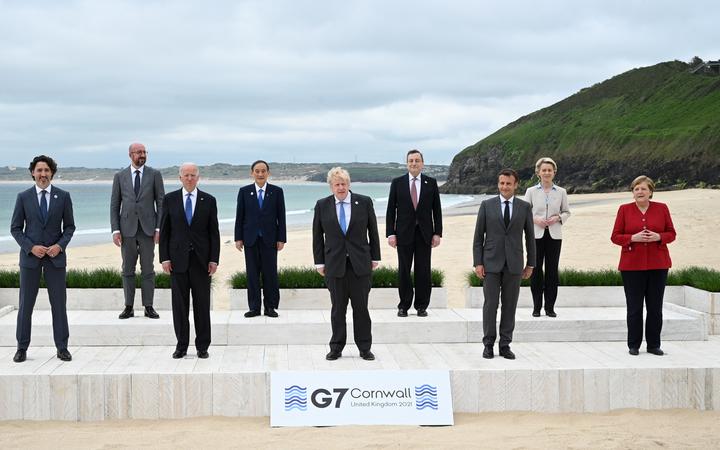 EU and G7 leaders pose for a socially distanced photo before getting down to business in Cornwall. Photo: AFP

The UK prime minister said it was vital to learn from the "mistakes" of the 2008 financial crisis and tackle the "scar" of inequality.

The leaders posed for the traditional "family photograph" as they gathered in the seaside resort of Carbis Bay.

The distribution of Covid-19 vaccines is also high on the summit agenda.

US President Joe Biden is among those being hosted by Johnson for the three-day meeting, as well as the leaders of France, Germany, Italy, Japan and Canada.

It is the first face-to-face summit of the G7 - representing most of the world's biggest economies - since before the pandemic started early last year. European Commission President Ursula von der Leyen and European Council president Charles Michel are also attending.

In his opening remarks at the main round-table discussions, Johnson said that, as the world recovered from the pandemic, it was important to "level up across our societies" and "build back better".

He added: "I actually think that we have a huge opportunity to do that because, as G7, we are united in our vision for a cleaner, greener world, a solution to the problems of climate change."

The prime minister also said it was "vital that we don't repeat the mistakes of the last great crisis - the last great economic recession of 2008 - when the recovery was not uniform across all parts of society". 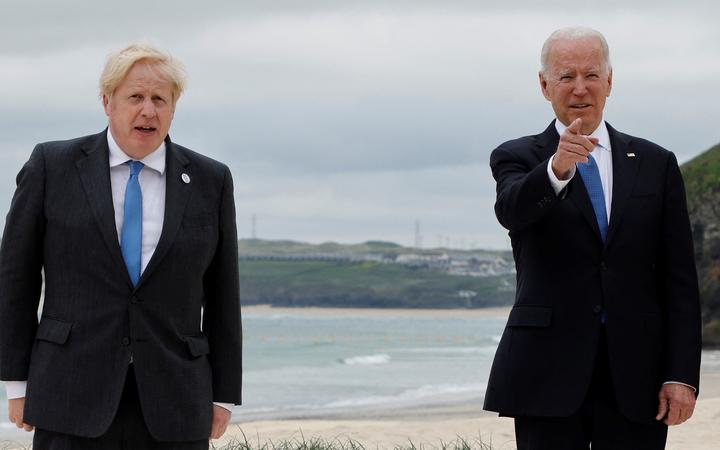 The UK government announced it was giving £430 million ($NZ850m) in aid to the Global Partnership for Education, to help the world's "most vulnerable children" get better schooling, with a "particular" focus on girls.

It was important for the world economy to rebuild in a "more equal and... in a more gender-neutral and perhaps a more feminine way" after the huge damage caused by coronavirus, Johnson told his fellow leaders.

As camera crews and photographers left the meeting room at the Carbis Bay Hotel, he joked that what had been intended as a "fireside chat" had turned into a "media circus".

Tweeting a photograph of himself with some of the other European leaders sitting on a seaside terrace, French President Emmanuel Macron wrote: "As always, the same union, the same determination to act, the same enthusiasm! The G7 can begin."

Johnson has pledged the UK will donate more than 100 million Covid-19 vaccines to poorer countries within the next year, while Biden promised 500m doses of Pfizer vaccines to 92 low and middle-income countries and the African Union.

But some charities and campaigners have criticised the scale of the UK's plan, under which 5m doses will be given out by the end of September, with 25m by the end of 2021 and the rest provided during 2022.

Lis Wallace, head of UK advocacy at anti-poverty campaigners One, said it was "not happening anywhere near fast enough", calling on Johnson to start sharing doses straight away.

And US pop star Selena Gomez told her nearly 65 million Twitter followers that the promise to deliver 5m vaccines by the end of September was "too little too late".

Gomez was among a number of celebrities who took part in a concert aimed at increasing access to Covid-19 vaccines in April. Biden also appeared at the event, as did Prince Harry and Meghan Markle.

The G7 nations are expected to collectively agree to provide a billion doses of Covid-19 vaccine in an effort to end the pandemic in 2022.

The politicians have been spending Friday in discussions before attending a reception at the nearby Eden Project, attended by the Queen, the Prince of Wales, the Duchess of Cornwall and the Duke and Duchess of Cambridge.

Hundreds of people joined a march in St Ives, just along the coast from Carbis Bay, urging leaders to "address the climate and ecological emergency".