Amnesty International's New Zealand director says an international mission is urgently needed after the group's report on Chinese treatment of Uyghurs and other minorities. 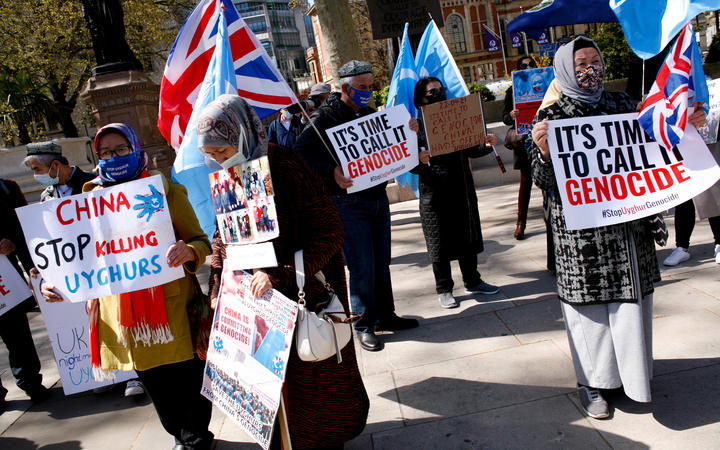 Members of the Uyghur community and human rights activists demonstrate outside the Houses of Parliament in London on 22 April 2021. Photo: AFP / 2021 Anadolu Agency

Amnesty International is accusing Chinese authorities of creating a "dystopian hellscape on a staggering scale" over the repression of Uyghur Muslims in north-western province of Xinjiang.

The human rights group says it amounts to crimes against humanity.

Amnesty International has just released a 160-page report, 'Like We Were Enemies in a War': China's Mass Internment, Torture, and Persecution of Muslims in Xinjiang.

It is thought to be the biggest collation of testimonies so far. More than 50 Uyghur Muslims have detailed their accounts of being detained in internment camps.

"This is a staggering number of testimonies and demonstrates the system China has set up to punish and deter Uyghurs and Kazakhs in this region," de Ronde said.

Former detainees said they were subjected to brainwashing and torture including beatings, electric shocks and being exposed to extreme cold.

Survivors recalled being interrogated in "tiger chairs" - steel chairs with affixed leg irons and handcuffs to restrain the body in painful positions.

Most of the 50 former detainees were held for what appeared to be lawful conduct, such as possessing a religious-themed picture or communicating with someone abroad.

China has reportedly detained up to 2 million Uyghurs, Kazakhs and other Muslim ethnic minorities in the autonomous region.

Beijing has always denied the claims saying the vocational camps are used to curb religious extremism.

Amnesty International is calling for more global pressure and says the international community needs to step up.

It is calling for the immediate release of those held in detention and an independent set of experts to enter Xinjiang and have free range to the region.

"Currently it's being highly orchestrated so we need an international mission urgently," de Ronde said.

The UK and Canada have declared the reported detentions and treatment of the Muslim minorities and genocide.

"We know China has forged trade relationships and their international reputation is very important to them.

"If international pressure becomes too much of a risk for China's reputation and trade partnerships, it may be that we see some movement."

De Ronde said governments will need to think carefully about how they continue to put the pressure on the Chinese government and uphold the UN calls for independent scrutiny.