It's feared that a plague of mice eating its way across rural New South Wales could invade the country's towns and cities next. 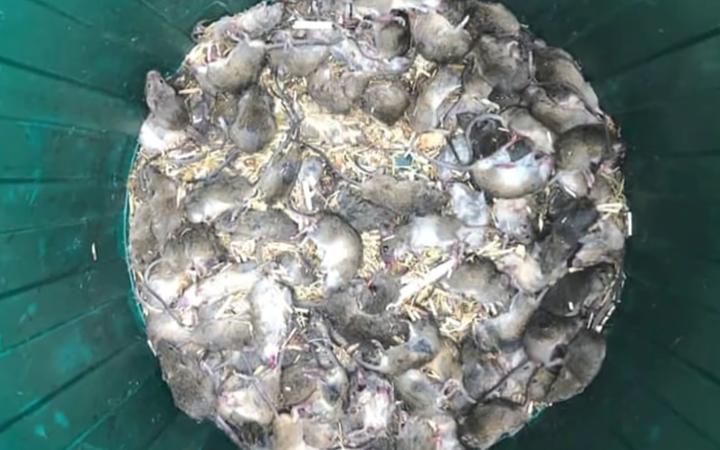 Entire farms and homes have been overrun by billions of rodents, in the country's worst mice plague for decades.

Authorities are now trying to get approval to use a highly-toxic poison to get the population under control, a controversial move that it's feared will kill native animals.

The mouse population exploded due to a bumper crop in 2020, which followed several years of drought and devastating wild fires.

While the harvest initially provided a much-needed reprieve for New South Wales farmers it was a reprieve, too, for the region's wild house mice.

Over the past year, Liverpool Plains farmer Xavier Martin has put out over a billion baits on his property alone, all of which have been taken.

"Driving around the countryside, you can come across patches of road where there's only a few mice rushing to and fro, training for Tokyo - they're as fit as all get out.

"And then you go another couple of kilometres and ... there's that much fur on the road you can barely see the tar."

On his farm, it's constant battle with the mice.

"During daylight you'd be lucky to see 100 mice for a lap - that's about 5km - but once you turn your lights on in the dark, it's just thousands of mice rushing to and fro.

"We've suffered significant damage. We've baited four farms five times since this time last year, mainly by aircraft. In hindsight, we should have gone harder after them because we've suffered more damage than it's cost us.

"Recently when we were harvesting mung beans, we had to stop harvesting at night because we didn't want mice going through the harvester and bits of mice getting in with the mung beans."

As well as destroying crops, the mice are damaging infrastructure and posing a major health risk.

"We've had machinery, houses, buildings, cars. You know, there's been fires. Here in our house they ate the drain hose off the dishwasher and flooded the kitchen.

"They get out under the eaves and in the gutters and down into the rainwater tanks and die in the tank so you've got bacteria-ridden drinking water."

Martin, who's vice president of the New South Wales Farmers Association, said farmers have made some progress getting mice numbers down through the use of zinc phosphide.

But they're unable to fund the type of wide-spread baiting operation needed stop the plague.

"Farmers are abandoning the sewing of various paddocks. In fact, some have abandoned their whole farms for winter cropping because they just can't manage the risk.

"We've been calling on the government to have a rebate scheme where there's a 50 per cent sharing of the cost of of bait."

The New South Wales government has committed to a $50 million mouse plague package, which includes an an "urgent approval" to use a poison called bromadiolone.

Banned in several countries due to the risk it poses to other species, the region's Agriculture Minister Adam Marshall recently described it as like using napalm on the mice.

Martin said farmers were worried about spreading the toxic chemical and would prefer using the tried-and-tested zinc phosphate.

"It's a pretty chronic situation and while we welcome the government acknowledging it's a natural disaster and putting $50 million on the table, unfortunately that $50 million hasn't translated into one dead mouse yet.

"It's just been an Impractical and dysfunctional response, unfortunately."

As the size of the mouse plague continues to grow, there are real concerns it could soon spread to larger towns and cities, including in Queensland and Victoria.

"We're starting to hear about cities of you know 50 to 100,000 or more and our members are reporting quite close to Sydney now where they produce horticultural goods, some of them are reporting ... an obvious increase in mice and rats.

"So even though our Premier and Deputy Premier don't seem to want come and engage and have a look at the problem - the plague - the good news is they're not going to have to go very far because the plagues coming to them."

In a recent Farmers Association plague impact survey, 93 per cent of respondents reported being concerned that the plague has led to unsafe accommodation, while 97 per cent said it was impacting their stress levels.

Eighty-five per cent of the 2000 or so respondents reported having disturbed sleep because of the mice.

"I've had men and women say to me, you know, their own experience of every morning waking up and finding that there's mouse urine and droppings on their pillow, or waking up in the night with mice in the bed," Martin said.

People have contracted illnesses like leptospirosis because of the rodents and Martin says there have even been instances of people being bitten while in hospital.

For the farmers of New South Wales, the mice are now an ever-present part of life.

"Gone are the days where you sort of apologised to each other when they come into a room that smells of mice. In fact it's more likely you'll get a comment if there's a room that doesn't smell of dead mice.

"I think it's something that our government just doesn't quite get - the effect of this natural disaster."