New Zealanders stranded in Melbourne will be able to fly home from Tuesday night.

Victoria has recorded five new locally acquired Covid-19 cases overnight and Melbourne remains in lockdown. The government has banned flights from the state in the past week.

But in statement last night, the Prime Minister's Department said people would be allowed to return if they had a negative pre-departure test taken less than 72 hours before departure.

People who have been in Victoria outside the Greater Melbourne lockdown area can fly to New Zealand today, if they had a current negative test.

The stakes for Melburnians, currently in the second week of a lockdown, were raised yesterday, when health authorities revealed that a coronavirus variant which has spread widely in India and the UK had been detected in the community in Melbourne.

The Delta Covid-19 strain has been identified in a family that tested positive after travelling to regional New South Wales last month.

There are now seven cases of the new Delta variant centred around a primary school in North Melbourne.

"That is now infamous in India and increasingly in the United Kingdom. It is a variant of significant concern," he said. 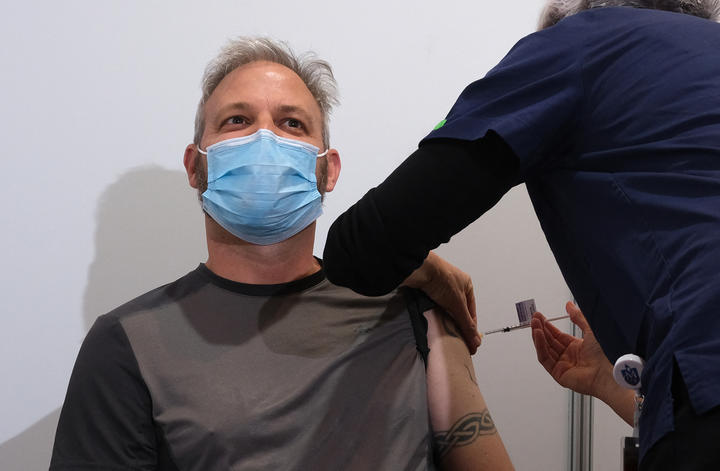 Genomic sequencing has not yet linked the variant to anyone in hotel quarantine or any other known Australian cases.

It is not connected to the rest of the state's outbreak, which is linked to another Covid-19 variant, Kappa, which also emerged in India.

For Melburnians on an emotional rollercoaster, the fear is the new strain could keep them in lockdown for longer.

With the state's case numbers now at 64 and two highly infectious strains in play, here are four factors authorities are focussed on.

The new cases are not linked.

Until yesterday, Victorian public health authorities had been tracking and tracing the coronavirus outbreak involving the Kappa Covid-19 variant that leaked from hotel quarantine in Adelaide.

However, Victoria's outbreak took a "concerning" turn yesterday when it was announced a family from West Melbourne who tested positive after returning from a holiday in regional NSW were not genomically linked to known Victorian cases.

The family was confirmed to have the Delta variant of the virus and authorities are not yet sure where or how the family contracted the virus.

The Delta variant has now been linked to seven Melburnians across two families.

Another child has also returned an indeterminate test result, but could be confirmed later as a positive case. 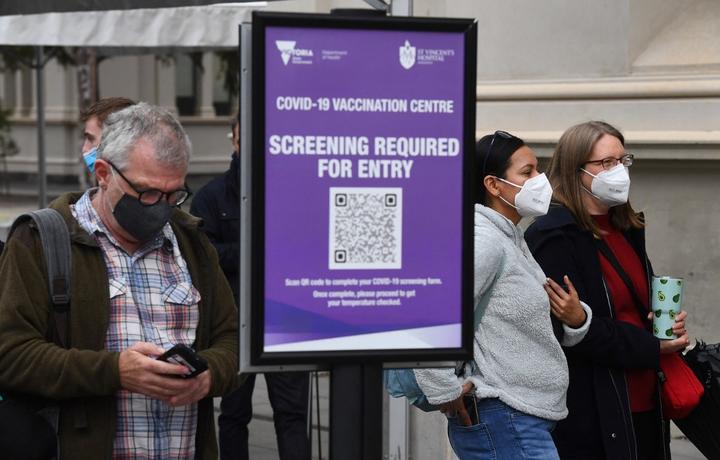 People waiting to be tested for Covid-19 in Melbourne. Photo: AFP

The strain is dominating global infections but it is believed this is the first time it has been detected in the Australian community.

However, it has been seen in hotel quarantine.

Professor Sutton said there was anecdotal evidence that the Delta strain may be both more transmissible in children, and lead to a greater severity of illness in children.

Australia's Chief Medical Officer Paul Kelly said there had been some evidence that vaccines may not be as effective against the Delta strain.

The director of Melbourne's Burnet Institute, Brendan Crabb said the unlinked nature of the newly revealed Delta cases and the Kappa cases was "quite a worry".

Professor Crabb, who is also an infectious disease researcher, said the discovery of the new variant had "upped the ante" in the outbreak.

"I'm concerned that we don't know where it's come from," he said.

Epidemiologist Tony Blakely from the University of Melbourne said the Delta variant was believed to be about twice as infectious as last year's strain.

"That does mean there's cause for concern in fertile soil, like what we have here with so few of our people vaccinated," Professor Blakely said.

He also said it appeared the strain was "a little bit less responsive to vaccines, as best we can tell".

But he said the arrival of the variant in Australia was not unexpected.

"It was eventually going to get on the ground in Australia given our quarantine's not that crash hot."

He said the real question for authorities was: how did it get into the community?

Sutton said the focus would be on uncovering where the new strain had come from.

"We review as we always have based on what else emerges. But we do need to understand where it has come from. That means there are unidentified upstream cases, whether they are in Victoria or elsewhere is to be determined," Sutton said.

Authorities have not yet ruled out that the source of the virus was in NSW, but have stressed investigations were continuing.

"Five or six days [of incubation] does put it potentially in New South Wales, Jervis Bay territory or indeed earlier, back in Victoria," Sutton said.

Health authorities say the West Melbourne family's 300 close contacts have been tested and about 70 percent have returned a negative result so far.

Health officials were working under the theory that the virus was spread between a child from the family that travelled to NSW and another child at their primary school in North Melbourne.

"We suspect so, but we need to look further, but that's the likely transmission at the moment," Sutton said.

It's believed one of the parents of the West Melbourne family is the index case in the Delta outbreak.

Victoria's Covid-19 testing commander Jeroen Weimar said Victoria was working with interstate authorities in a bid to find out how the family became infected.

"In terms of acquisition testing that's the real priority for the next few days over the weekend … there's been conversations happening with our colleagues in NSW, the ACT and the commonwealth around whatever info they have about positive cases that have been in their care recently.

"Bear in mind we started with a family of four from West Melbourne who returned from Jervis Bay … we identified all of their primary close contacts … it includes a significant [North Melbourne Primary School community] … more than 300 primary close contacts in there, that's why the three people who tested positive [Thursday] night were part of that group."

Weimar said contact tracers were working with the second family to see if there was "anything in their world we need to be concerned about".

Authorities will now attempt to zero in on the "real priority" of finding the source of the acquisition.

Meantime, they will continue to work with primary close contacts, including North Melbourne primary school community members, to encourage and support ongoing testing.

"We've got 70 percent of those people have now returned a negative result, so that's the kind number we expect to see after a few days.

"We continue to support and encourage testing for that group and we are working with any vulnerable members of the community in that cohort," Weimar said.

This led some epidemiologists to suggest Melbourne might be able to get out of lockdown sooner, however authorities quickly put an end to any such hopes.

The Health Department said while two fewer positive cases was welcome, a further eight cases of transmission through passing contact between people who had not directly interacted with each other, remained under investigation.

There are five exposure sites where this has spread into the community through people who don't know each other and where there was no record of direct interaction.

Authorities stressed they needed to be certain all of those cases were fully contained.

They said "stranger to stranger" transmissions took place at a Telstra Store in South Melbourne, JMD Grocers & Sweets in Epping, a doctor's on Broadway in Reservoir, a Woolworths in Epping North and the Craigieburn Central shopping centre.

The acting premier James Merlino said the two false positive cases did not impact the timeline of Victoria's lockdown, which at this stage is set to last until midnight next Thursday.

Meanwhile, Professor Crabb said the before the emergence of the Delta variant, Victoria had been "starting to look pretty good".

"We have this other serious worry now that we're going to have to wait a few days and see if we can find out if that's spread, if it's anywhere else, in NSW, all these questions are now there."

He said Victoria now had a "big few days ahead".

Blakely said it was now "full gas" for Victorian authorities.

"With this particular one being the Delta variant, we really need to knock it out," he said.