As India's health system sags under the weight of an unprecedented second wave of Covid-19 medical quackery is growing in the gaps. 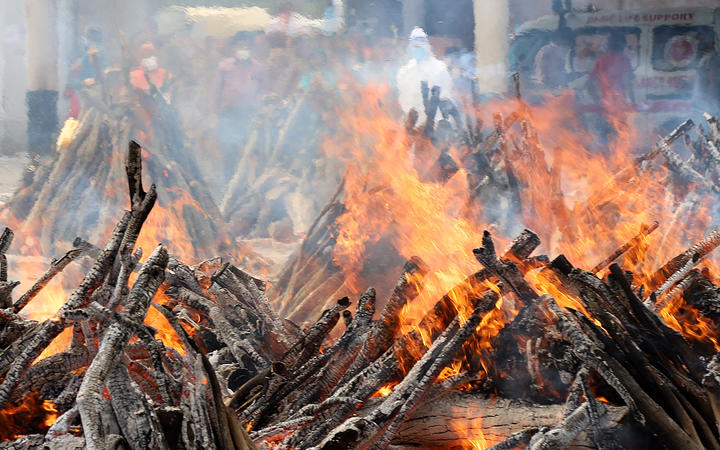 From cow dung baths to mass "anti-Covid" steam-inhalation events, misinformation is rampant - and some government officials have been partly to blame.

In Prime Minister Narendra Modi's home state of Gujarat, a group of Hindu monks visit a cow shelter every week to lather themselves in cow dung, in the hope it will offer protection from the virus.

The cow is considered sacred among Hindus, with some believing cow dung and urine to have antiseptic properties. 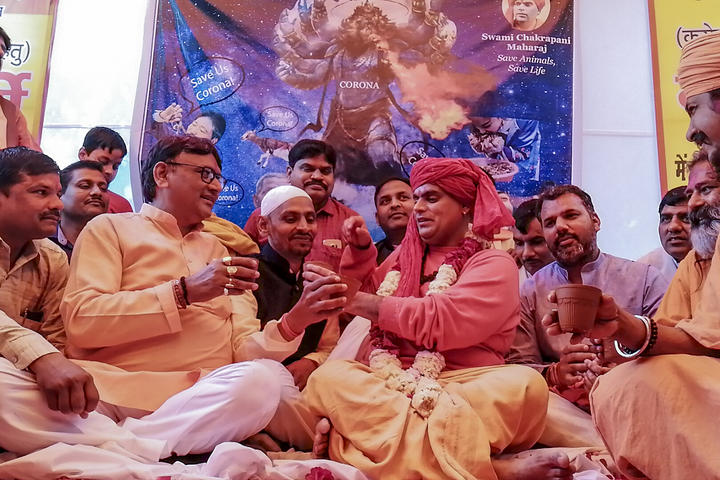 Members of a prominent Hindu party at a cow urine party last year, claimed to fight the spread of Covid-19. Photo: AFP

This belief that cow products - milk, dung, urine - contain medicinal or restorative properties has been promoted by government officials.

The government itself last year called for more research into the medicinal properties of milk, dung, and urine belonging to indigenous Indian cows - a move that was widely criticised by Indian scientists.

This year, a ruling Bharatiya Janata Party (BJP) member of the Legislative Assembly from India's most populous state of Uttar Pradesh recommended in a YouTube video that people consume cow urine diluted with water as a way to defeat Covid-19. 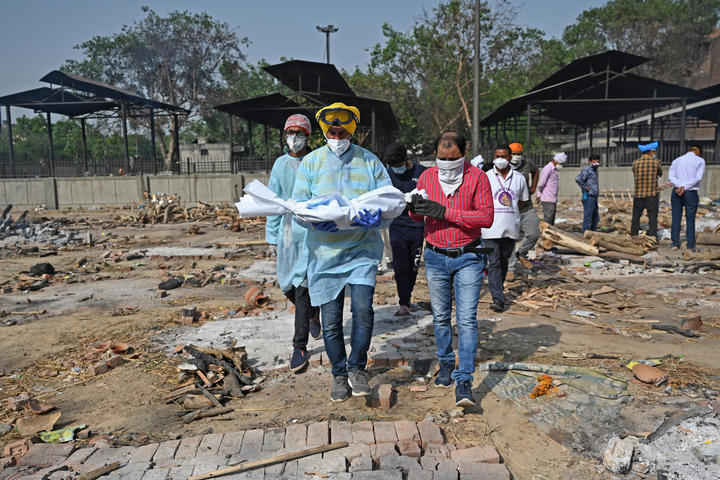 A volunteer carries the body of a child who died of Covid-19 for the last rites at a crematorium in New Delhi, on 12 May. Photo: AFP

None of these claims are backed by evidence.

The Indian Medical Association said neither cow dung nor cow urine were legitimate Covid-19 treatments, and their use in this way risked spreading other diseases.

Infectious diseases specialist Associate Professor Sanjaya Senanayake from the Australian National University also said there was no science behind this belief, and it could be harmful.

"Cow dung and cow urine can contain other pathogens that could then lead to a second infection on top of Covid, which worsens your outcome," Professor Senanayake said.

He said people should be focused on a few proven actions in order to reduce one's risk of catching the virus.

"The key things are to wash your hands with soap and water, or an alcoholic sanitiser when possible; practise social distancing; and wear a mask if you cannot keep a distance."

Members of government promoting false or harmful remedies in their official capacities during a deadly second wave of the pandemic has helped increase the spread of fake news.

Pratik Sinha, the co-founder of Indian non-profit fact-checking website Alt News, said any time a prominent person promoted such pseudoscience, it had a huge impact.

A minister from the BJP posted on Facebook a false viral claim that a particular herbal concoction could increase one's oxygen levels if they were falling.

"That has now resulted in professional packages of these being sold in shops as oxygen enhancers," Sinha said.

"There was a doctor who had a Covid patient with low oxygen. Somebody sent him this concoction, which worsened his condition after he sniffed it. It had the opposite effect [to increasing oxygen]."

The claim had gone viral as a kind of "home remedy" around mid-April, amid the surge in Covid-19 cases across the country.

Sinha said that while unscientific opinion was common across India, the stream of irresponsible statements had been heaviest from leaders of the ruling BJP.

"There are some leaders from other parties who make such claims, but the vast majority has been from BJP leaders," he said.

In February this year, just before the second wave, billionaire Hindu spiritual leader Baba Ramdev - a fixture in government circles - received approval from India's Ministry of Ayush for Coronil, a herbal product. 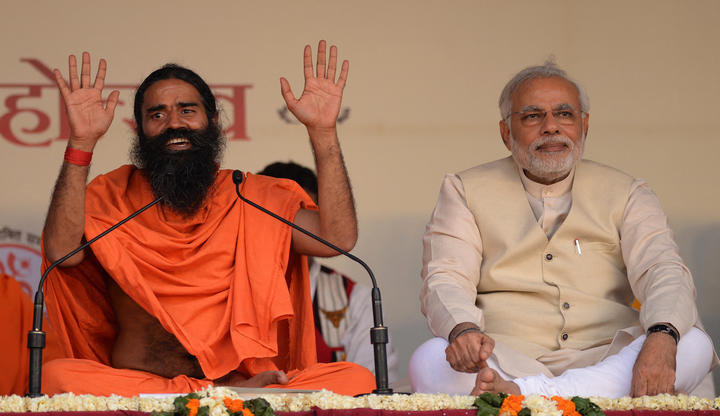 Billionaire godman Baba Ramdev with Narendra Modi when he was a prime ministerial candidate. Photo: AFP

The Ministry of Ayush is a creation of the Modi government for the promotion of alternative medicines, such as ayurveda, naturopathy and homeopathy.

In mid-April, Google searches for Coronil saw a significant uptick as people searched for help.

When Ramdev first launched Coronil last year, it was with the false claim that this would be a Covid-19 cure, with "100 per cent recovery guaranteed" within seven days, local media reported.

India's Health Minister Harsh Vardhan was present at the event.

That claim came under heavy criticism, and the Ministry of Ayush then refused to certify it as a cure.

This year, however, the ministry did certify it as a "supporting treatment" against Covid, an upgrade from its previous status as an "immuno-booster".

This was despite the BBC last year commissioning a study by the University of Birmingham into its effects, which found it to be ineffective as an immunity booster.

The sample on which Coronil's claims are based is around 100 people - 50 in the placebo group and 50 receiving the treatment.

One of the authors of the study is also the billionaire chairman of the company that makes Coronil, Patanjali.

The study was published in a little-known journal called Phytomedicine.

Coronil is currently sold in the US with a disclaimer saying it has not been evaluated by the US Food and Drug Administration, but that it is "not intended to diagnose, treat, cure, or prevent any disease or health condition", according to Forbes.

In the UK, Forbes reports it is no longer available on Amazon.

In Australia, it is sold on Amazon with claims that it boosts immunity and "protects from diseases and viruses". 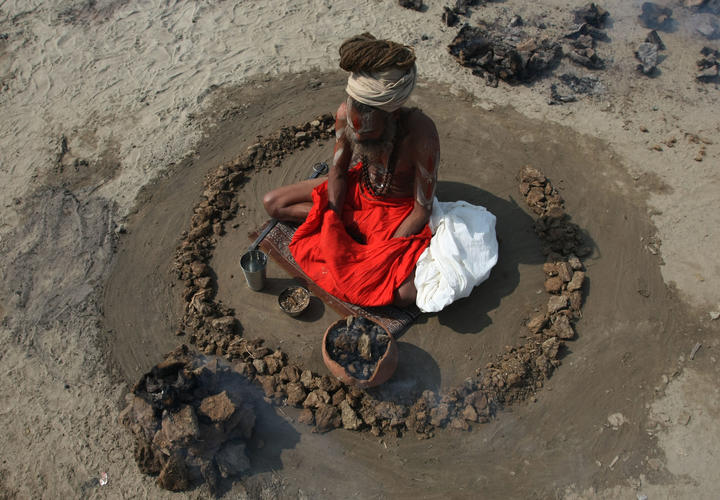 Mass steam inhalation 'has no science to support it'

Government officials in at least two states, including India's most populous one, have promoted mass steam-inhalation gatherings as a preventive measure against Covid-19, despite there being no evidence that it is beneficial.

The ruling party's national general secretary promoted one such event being held in the state of Karnataka.

While steam inhalation can be beneficial in easing congestion, it has not been proven to ease respiratory problems or have any effect in preventing or treating a viral infection.

Professor Senanayake said he would not recommend steam inhalation as a treatment or preventative measure.

"I certainly wouldn't encourage it," he said.

"If somebody in the room has Covid, then they could spread it in such a situation.

"But there's no science to support the theory that steam helps treat or prevent Covid."

But experts say the true death toll could be five to 10 times higher, given the large proportion of unrecorded deaths.

As people become desperate to find treatment and protect themselves from the virus, unproven "cures" and "treatments", especially ones that utilise easily available materials, go viral and spread across the country.

"Things like Baba Ramdev's advice to rub mustard oil on the inside of one's nose to prevent infection, or his advice to check if one has Covid by holding their breath for a minute," he said.

"Other suggestions like drinking hot water with lemon to kill the virus in the throat … these are the kind of fake remedies people get influenced by."

Epidemiologists have said that people should take steps that are backed up by science, like washing their hands, keeping their distance and wearing a mask.

The ABC has contacted the Indian Health Ministry and the Ministry of Ayush for a response.