The first repatriation flight from New Delhi has landed in Darwin following the end of the federal government's controversial ban on travel from India. 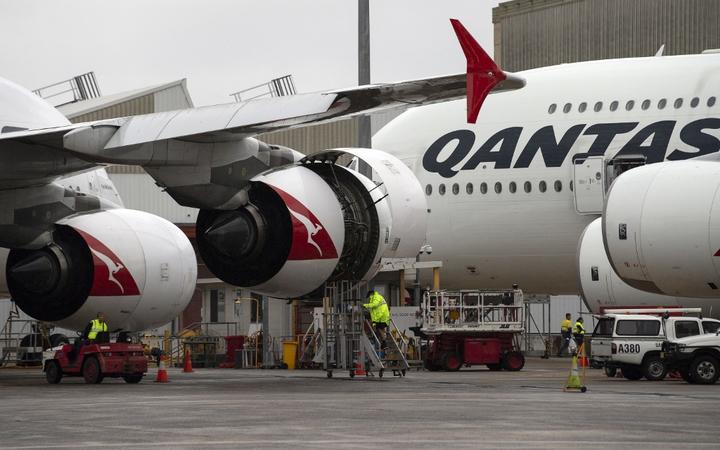 Seventy people were prevented from boarding the flight, either because they tested positive for Covid-19 or were close contacts. (file pic) Photo: AFP

The Qantas jet touched down at the RAAF base shortly before 9am, local time.

It was scheduled to carry up to 150 passengers but in the end only carried 80 people back to Australia.

A total of 70 people were barred from boarding; 46 of those tested positive to Covid-19, while 24 others were identified as close contacts.

While the government tried to fill the flight with more passengers, it struggled to do so because of the window for pre-flight testing restrictions.

The new arrivals have been taken to the Howard Springs centre where they will remain in quarantine for a fortnight.

Howard Springs has repatriated Australians from Wuhan and the infamous Diamond Princess cruise ship. But the resumption of repatriation flights from India will see the facility face its greatest challenge yet.

But many of those left behind in India are still in a state of shock.

Jitin Wig was due to board the plane with his family before both his wife and his toddler tested positive to Covid-19.

He told the ABC his wife and toddler were not experiencing any symptoms but remained deeply worried about how he would find care for them if they fell seriously ill.

"The whole medical system here is a shambles, so if it does get serious here for any of us, I'm not sure how I'd be able to get help," he said. 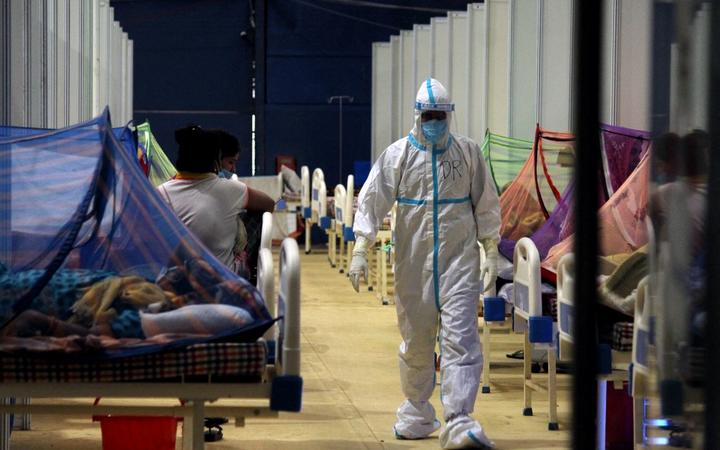 A doctor walks through a makeshift Covid-19 treatment facility set up in a sports centre in New Delhi. Photo: AFP

The federal government introduced the India travel ban a fortnight ago to help quarantine facilities deal with the very high infection rate of Australians returning from the country.

Passengers on this flight had to undergo and return a negative result on two tests before they could get on the plane - a PCR test in the two days beforehand and then a rapid antigen test.

Wig said he was incredulous when he found out they'd tested positive for Covid-19 because his whole family had been self-isolating for a month, and everyone had been in good health.

"We were just dancing all night to toddler tunes, me and my kid, absolutely no suspicion - none of the symptoms," he said.

"So when I did see the report, and I told my wife, she thought that I was playing a prank and it couldn't be that we are positive. So that was extremely surprising."

Another flight from India is scheduled in just over a week.

There are about 10,000 Australians, permanent residents and their immediate family members seeking to return home from India, with around 1000 who are classified as 'vulnerable' for health or financial reasons.

The Australians who have tested positive will still be eligible for future flights, but only after they can prove they no longer have the virus.

Wig said while he was deeply disappointed to miss the flight, he accepted the government's rationale.

"I understand the government's position. If people are testing positive, they don't want to bring the infection over, I understand they are trying to protect the economy, the people," he said.

"Even though I'm one of those people who didn't get to go on a flight today, I would still agree that if somebody is testing positive, it is best - for the larger good, I would say - to not bring them over."

But he said the government should still consider repatriating Australians with Covid-19 who were particularly vulnerable because they were suffering other serious illnesses.

He also called on the government to provide medical support - including oxygen supplies and medication - to those who remain stuck in the country.

Labor has hammered the Coalition over the predicament of stranded Australians in India, with Opposition Leader Anthony Albanese this morning saying the Coalition should have moved more quickly to get people home.

Some health experts are uncomfortable with the policy of leaving Covid-positive Australians in India, to grapple with that country's overwhelmed healthcare system.

Associate Professor Adam Kamradt-Scott, from the Global Health Security Network, said the federal government should be finding a way to repatriate them safely.

"The fact is that our healthcare system and our country, our quarantine system, has sufficient capacity to manage much larger numbers [of Covid-19 cases] than what we're currently seeing," he said.

Professor Kamradt-Scott said Australia had a legal and moral obligation to look after its citizens, with or without Covid-19.

"If our system can't handle easily 100 people coming back who are testing positive a week, if it can't handle that, then we need to look seriously at our healthcare system," he said.

The federal government is sticking by the policy, arguing the healthcare system needs to be protected.

Treasurer Josh Frydenberg said the risk of an outbreak is too great.

"We've got to maintain our health settings because we know how damaging both to the lives and the livelihoods of Australians an outbreak would be," he said.