As an Indonesian navy submarine crewed by 53 men glided below the surface of the Bali Sea during a routine training exercise, it may have been hit by an invisible but powerful force that dragged them to the deep. 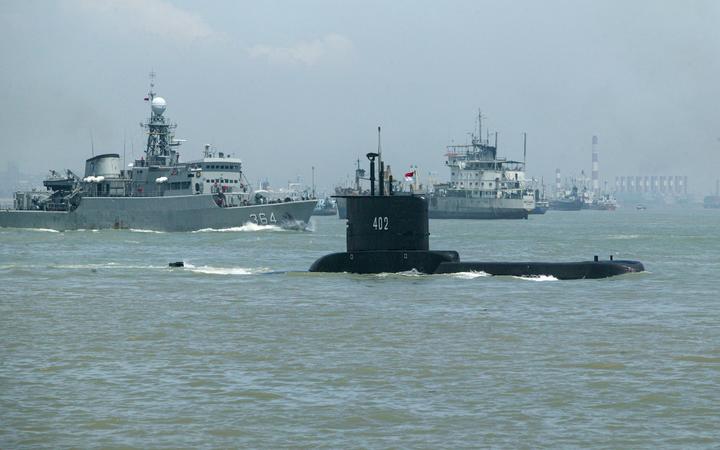 Indonesian navy officials suspect an internal solitary wave, known to occur in the seas around Bali, may have caused the sinking of KRI Nanggala 402, and the loss of its 53 crew.

The vessel sank to a depth of 838m, far beyond the reach of rescuers.

As the personal effects of crew members floated up and the oxygen supply on board slowly dwindled, officials said there was no chance anyone survived.

Many theories have been put forward as to what went wrong, but authorities now say there is evidence an underwater wave - which can exert an intense vertical pull below the sea surface - occurred in the Bali Sea around the very time the submarine disappeared last Wednesday morning.

So what is an internal solitary wave?

The Lombok Strait between the islands of Bali and Lombok is said to be famous for generating intense internal waves on an almost fortnightly basis.

NASA, the US space administration, said the combination of strong tidal currents, a rough ocean floor and the exchange of water between two channels - one shallow and one deep - "tend to combine about every 14 days to create an exceptionally strong tidal flow".

Indonesian navy officials believe this natural phenomenon is a more likely explanation for the submarine disaster than other theories put forward in recent days.

Internal waves are virtually imperceptible on the ocean's surface. But underwater, they can reach towering heights.

Rear Admiral Muhammad Ali - a former commander of KRI Nanggala 402, and now an assistant of planning and budgeting in the Indonesian navy - said an internal wave was effectively "a strong current which can drag the sub vertically so it would sink faster than it should."

"Our suspicion falls on natural conditions. Because an internal solitary wave occurred at that time in the north of Bali," he told Indonesian media this week.

"It moved up from the bottom to the north and there's a trench between two mountains," Rear Admiral Iwan Isnurwanto, Commander of the Indonesian Navy Command and Staff School, said.

Admiral Iwan explained an internal wave could render the crew helpless in the face of nature.

"It would be nature's will," he said.

"Once the water carried the sub and pushed it down, what else could we have done? No safety measures could have tackled that problem.

"There's a big possibility that this was what happened."

Some have suggested that the sub was hit by a missile from a foreign vessel, or even experienced a power blackout.

Naval officials say the submarine was still detected as it began its dive for the torpedo drill, and "the lights were on" - meaning there was only a small chance that an electrical blackout was to blame.

They also denied that the sub was overloaded, a theory suggested because there were 53 crew on board but only 34 beds, instead arguing that the crew were divided into three shifts and took turns to sleep.

"The sub was originally for 33 personnel, then it was modernised to comply with our need to have 50 personnel onboard," Admiral Iwan said.

However, officials said the sub was also designed to carry up to eight torpedoes - weighing about one tonne each - but only had four at the time of the disaster.

Many other experts suggested metal fatigue from cracks or corrosion, and the sub's age, as more likely causes. The KRI Nanggala 402 was built in 1978 and was last overhauled in 2012, almost a decade ago.

It was due for another refit last year but this was delayed because of the pandemic.

"Causes could include a material or mechanical failure leading to catastrophic flooding of one or more compartments," he wrote in The Conversation this week.

"It does not take much loss of buoyancy for a submarine to lose control of its depth.

Short of retrieving the submarine or its parts from the seabed, investigators may never be able to determine the exact cause of the tragedy.

Will Indonesia be able to retrieve the ship from the bottom of the sea?

The KRI Nanggala 402 lost contact with navy authorities about 4am on the morning of 21 April, soon after it was given permission to dive for a torpedo firing exercise.

Search ships and a helicopter reported an oil slick in the area, and the smell of diesel fuel, a few hours later.

Ships from around the world joined a massive search over several days, until objects from the missing sub were found floating in the Bali Sea on Saturday, including prayer mats, part of the torpedo firing mechanism and oil for the sub's periscope.

An underwater scan then confirmed the sub had sunk to a depth of 838m and split into at least three parts - the hull, the main section and the stern.

Indonesian military authorities are now grappling with how - or if - they can raise the sub from such a depth, given the logistics of such a task and the huge expense.

Rear Admiral Goldrick said there was precedent for raising at least parts of a submarine from an even greater depth than the KRI Nanggala 402.

"The United States' 1974 mission codenamed Project Azorian involved the covert recovery [from much deeper water] of large components of a sunken Soviet missile-carrying submarine," he said, referencing the sinking of the K-129.

"Nevertheless, bringing some 1300 tonnes of metal back to the surface from a depth of more than 800m remains a formidable proposition."

Indonesian military and marine experts say the Nanggala's depth and its rupture into several parts means there are only a couple of feasible options for raising the sub to the surface.

They could attach tubes or balloons with air or a buoyant liquid to the hull, or lift the sub with steel cables from a crane or barge, as was done with the Kursk, on which all 118 crew members died.

But both options are expensive, logistically daunting and would require intensive use of remotely operated vehicles.

Raising the front of the sub also could also pose a risk to rescue teams by having to handle explosives from the torpedos that may also be damaged.

For now the navy is focused on recovering smaller items, using a remotely operated vehicle that can lift objects up to 150 kilograms.

Families of the 53 crew are demanding, at the very least, the navy bring the remains of their loved ones to the surface for proper burial, even if the submarine cannot be recovered.

The sad reality, as some Indonesian media suggest, is the 53 crew will remain forever at sea on "eternal patrol".