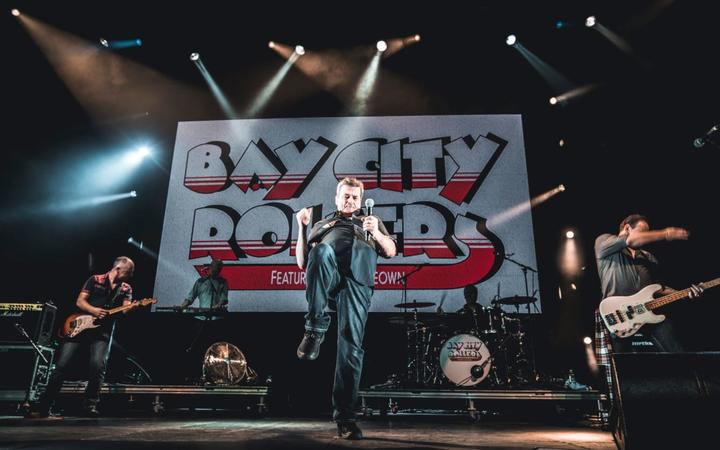 The Scottish pop singer fronted the Edinburgh band during their most successful period in the 1970s.

They had hits with tracks like I Only Wanna Be With You, Bye Bye Baby, Shang-a-Lang and Give a Little Love.

His family announced online on Thursday that he had died suddenly at his home on Tuesday.

Bay City Rollers became tartan-clad sensations in the UK and US in the 1970s. They were hugely successful, selling more than 120 million records.

"They were adorable. Five cute guys at once. That's the story of rock n roll," US journalist Danny Fields told the BBC.

"The invention of boy bands became an industry thanks to the Bay City Rollers."

The group got together in the early 70s and found their name by throwing a dart at a map - it landed on Bay City near Michigan, according to the Official Charts Company.

Their first single was Keep On Dancing in 1971, and they had two number one hits in 1975 with Bye Bye Baby and Give A Little Love, plus chart-topping albums with Rollin' in 1974 and 1975's Once Upon A Star.

McKeown said the band's first pair of tartan trousers were inspired by a picture on a birthday card and were made by his father, who was a tailor.

The vocalist, who left school aged 15 and joined a band called Threshold, went on to join the Bay City Rollers aged 18 in 1973.

He left in 1978, as the band decided to go in a more new-wave direction under the new name The Rollers, but he later rejoined for several comeback tours and live recordings.

"We would go on and the police would make us stop because they just could not control the crowd," he said.

When he was on a rare visit home to Edinburgh, McKeown - just 20 at the time - ran over and killed a 76-year-old woman.

The day after the accident McKeown rejoined the tour.

He said: "I can remember just being in complete shock. I don't know how long it took me to come out of that shock.

"In retrospect I should have dealt with the issue in a much more comprehensive way."

Despite some witnesses claiming McKeown was driving too fast, a court cleared him of the more serious charge and instead found him of guilty of reckless driving. He was fined £100 and banned from driving for a year.

McKeown claimed in numerous interviews that the guilt over the incident never left him, and was a big part of his alcoholism, as the Rollers' popularity waned dramatically in the late 1970s. He was also open in interviews about his trips to rehab.

After he left the band, McKeown formed the pop group Egotrip, and released a solo album All Washed Up in 1979.

He toured more recently under the name Les McKeown's Bay City Rollers. They had been mid-way through a tour in Toronto as the coronavirus pandemic took hold, and had to return home quickly. The tour had been rebooked for November 2021.

McKeown told the Edinburgh Evening News last August that during lockdown he had "never had so much time off", and was usually always on the road for half of the year.