Hong Kong pro-democracy media tycoon Jimmy Lai has been sentenced to 14 months in prison after being found guilty of unauthorised assembly. 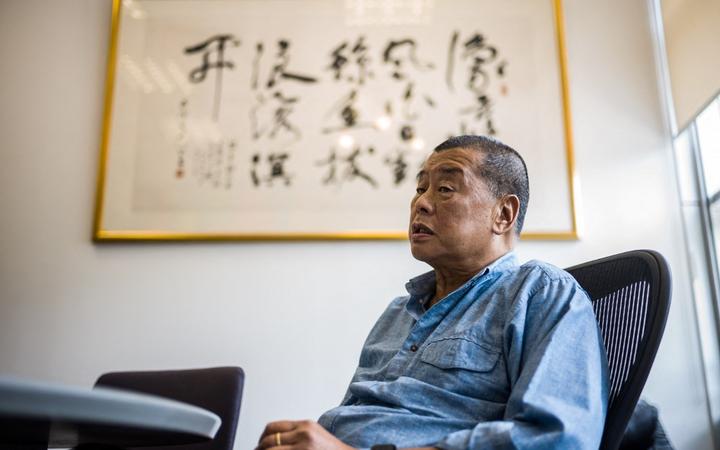 Jimmy Lai speaks to a reporter at the Next Digital offices in Hong Kong in June 2020. Photo: AFP

Lai, 73, was one of several activists in court who were earlier found guilty of charges relating to pro-democracy protests in 2019.

The founder of the Apple Daily tabloid is a fierce critic of Beijing.

Friday's verdict comes as the mainland is increasingly cracking down on Hong Kong's rights and freedoms.

Several other activists were sentenced on Friday for participating in two demonstrations, on 18 August and 31 August 2019.

They include veteran campaigner Martin Lee, 82, and lawyer Margaret Ng, 73, whose sentences were suspended.

Earlier this week, Lai's Apple Daily newspaper published a handwritten letter by him, sent from prison, which read: "It is our responsibility as journalists to seek justice. As long as we are not blinded by unjust temptations, as long as we do not let evil get its way through us, we are fulfilling our responsibility."

Lai was sentenced to 12 months for the 18 August demonstration and another eight months for 31 August. However, the judge ordered for the sentences to be served concurrently except for two months. Former lawmaker Lee Cheuk-yan was also jailed for both demonstrations. 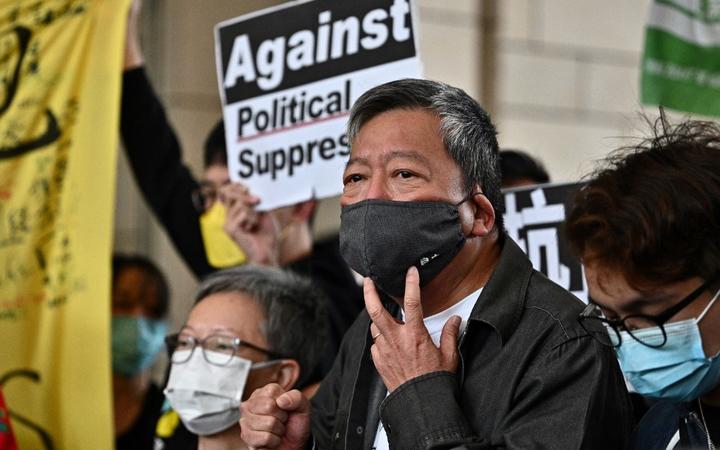 The tycoon faces another six charges - two of which were imposed under the country's new National Security Law, which can carry a maximum term of life in prison. It is possible that prosecutors could file further charges against him.

The law, implemented in Hong Kong by China last year, criminalises secession and subversion. Earlier this month, Beijing overhauled the territory's electoral rules to ensure more loyalty to the mainland.

Sequel to wave of demonstrations

The sentencing is part of a series of trials all relating to the large-scale pro-democracy protests two years ago.

In 2019, protests culminated in the most tense wave of demonstrations in years, often ending in widespread violence between police and activists.

The pro-democracy campaigners were already found guilty of unauthorised assembly earlier this month.

Their defence team had argued that freedom of assembly is protected under Hong Kong's constitution, and that authorities had approved a demonstration which only then grew into the unauthorised march.

The prosecution argued that freedom of assembly - while granted in the constitution - was not absolute in Hong Kong.

Jimmy Lai a hero to some

Lai is one of the most prominent supporters of Hong Kong's pro-democracy movement and faces separate charges under Beijing's national security law.

Estimated to be worth more than $US1 billion ($NZ1.4b), he made his initial fortune in the clothing industry and later ventured into media and founded Next Digital.

Next Digital publishes Apple Daily, a well-read tabloid which is frequently critical of Hong Kong and mainland Chinese leadership.

In a local media landscape increasingly fearful of Beijing, Lai has been a persistent thorn for China - both through his publications and writing.

It has seen him become a hero for many residents in Hong Kong but on the mainland he is viewed as a traitor who threatens Chinese national security.

Interviewed by the BBC before his arrest, he said he would not give in to intimidation.

"If they can induce fear in you, that's the cheapest way to control you and the most effective way and they know it. The only way to defeat the way of intimidation is to face up to fear and don't let it frighten you."

Who are the others?

Martin Lee, the veteran of Hong Kong's struggle for more political rights, is the founding chairman of the Democratic Party.

Known as the father of Hong Kong democracy, he said in 2020 he was "very much relieved" by his arrest.

"For so many years, so many months, so many good youngsters were arrested and charged, while I was not arrested. I feel sorry about it," he added.

Many of the others had been at the heart of the pro-democracy struggle for years dating back to the Umbrella Movement in 2014 and even further.

Leung Kwok-hung, known as "Long Hair", was a member of the city's parliament, the Legislative Council (LegCo) and even once tried to run as chief executive, the territory's highest office.

Margaret Ng was a key figure in the Civic Party, another opposition group pitted against Beijing's rising influence and also served several years in LegCo.