A nuclear facility in Iran was hit by a "terrorist act" a day after it unveiled new advanced uranium centrifuges, a top nuclear official says. 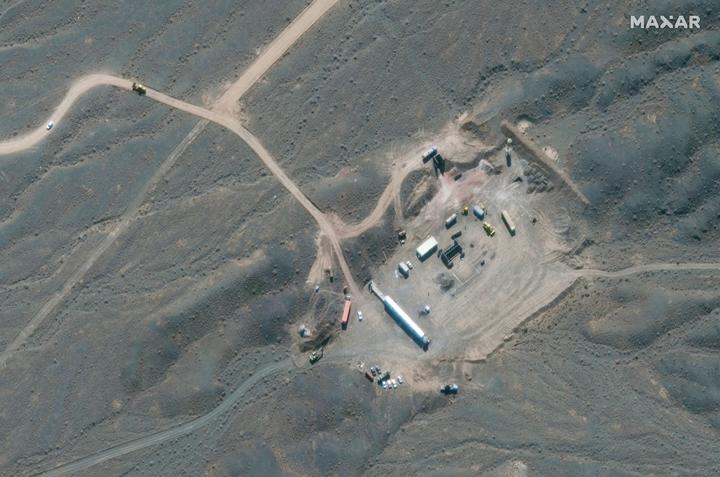 He did not say who was to blame but urged the international community to deal with nuclear terrorism.

Israeli media suggest the incident was a result of an Israeli cyber attack.

Last year, a fire broke out at the Natanz underground facility, which the authorities alleged was the result of cyber sabotage.

The latest incident comes as diplomatic efforts to revive a 2015 nuclear deal - abandoned by the US under the Trump administration in 2018 - have resumed.

On Saturday, Iran's President Hassan Rouhani inaugurated new centrifuges at the Natanz site, which is key to the country's uranium enrichment programme, in a ceremony broadcast live on television.

Centrifuges are needed to produce enriched uranium, which can be used to make reactor fuel - but also material for nuclear weapons.

It represented another breach of the country's undertakings in the 2015 deal, which only permits Iran to produce and store limited quantities of enriched uranium to be used to produce fuel for commercial nuclear power plants.

What has Iran been saying?

On Sunday, a spokesman for the Atomic Energy Organisation of Iran (AEOI), Behrouz Kamalvandi, said an "incident" had occurred in the morning involving the nuclear facility's power network.

Mr Kamalvandi did not provide further details but told Iran's Fars news agency there there had been "no casualties or leaks".

Later state TV read out a statement by AEOI head Ali Akbar Salehi, in which he described the incident as "sabotage" and "nuclear terrorism".

"Condemning this despicable move, the Islamic Republic of Iran emphasises the need for the international community and the International Atomic Energy Agency [IAEA] to deal with this nuclear terrorism," he was quoted as saying.

"Iran reserves the right to take action against the perpetrators."

The IAEA said it was aware of the reports of an incident but would not comment.

Last July, sabotage was blamed for a fire at the Natanz site which hit a central centrifuge assembly workshop.

How could Israel be involved?

Israeli public broadcaster Kan said that it could be assumed that the incident was an Israeli cyber operation, citing the discovery in 2010 of the Stuxnet computer virus, believed to have been developed by the US and Israel, which was used to destroy centrifuges at Natanz.

Haaretz newspaper also said the incident could be assumed to be an Israeli cyber attack.

Ron Ben-Yishai, a defence analyst at the Ynet news website, said that with Iran progressing towards nuclear weapons capability it was "reasonable to assume that the problem... might not have been caused by an accident, but by deliberate sabotage intended to slow the nuclear race accelerated by the negotiations with the US on removing sanctions".

The Iranian nuclear deal, known as the Joint Comprehensive Plan of Action (JCPOA), has been in intensive care since Donald Trump pulled the US out of it.

Under the Biden administration diplomatic efforts have been redoubled to revive it.

But Israeli Prime Minister Benjamin Netanyahu has warned against a return to the deal, and declared last week that Israel would not be bound by a new agreement with Tehran.

What happened to the deal?

The nuclear deal only allows Iran to produce and store limited quantities of uranium enriched up to 3.67% concentration. Uranium enriched to 90% or more can be used to make nuclear weapons.

Mr Trump said the accord was based on "a giant fiction that a murderous regime desired only a peaceful nuclear energy programme" and reinstated crippling economic sanctions in an attempt to compel Iran to negotiate a replacement.

Iran, which insists it does not want nuclear weapons, refused to do so and retaliated by rolling back a number of key commitments under the accord.

It has since accelerated the breaches in an attempt to increase pressure on the US. They have included operating advanced centrifuges to enrich uranium, resuming enrichment to 20% concentration of the most fissile U-235 isotope, and building a stockpile of that material.