When scientist Alan Baker made a cut in the side of an exotic plant in the Philippines jungle, the sap that bled out had a jade-green glow. 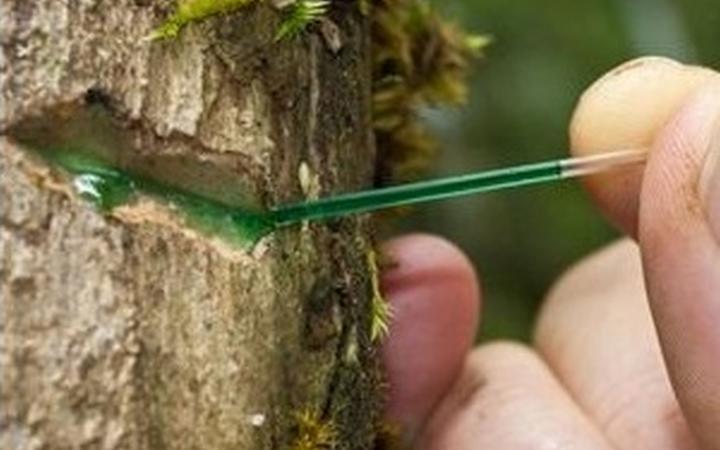 The phloem sap of Phyllantus balgooyi. The green color is due to the high nickel concentration in the sap. Photo: Antony van der Ent / (CC BY 4.0)

The shrub was a newly discovered species, soon to be known as Phyllanthus Balgooyi, one of a rare variety of plants that naturally suck high amounts of metallic elements from the soil.

The fluorescent sap turned out to be 9 percent nickel.

It was a welcome finding, but not a surprise, as Professor Baker's research into so-called "hyperaccumulators" had already uncovered species that seemed to thrive on everything from cobalt to zinc, and even gold.

"These are plants which can take up elements from the soil [at rates] orders of magnitude higher than normal plants," Professor Baker says.

Scientists are now on a quest to discover whether farming these plants could provide an alternative to environmentally-destructive mining, while also helping to rehabilitate former mine sites.

In his chemical analysis laboratory in suburban Brisbane he's doing tests on perhaps the most well-known hyperaccumulator of them all - the Macadamia tree.

Its leaves and sap - but not the nut - are rich in manganese.

In recent years Dr van der Ent traversed the globe searching for new species of hyperaccumulators, but Covid-19 has temporarily put that research on hold.

He said the plants were most common in countries around the equator.

"We have found them in Southeast Asia, as well as New Caledonia, and in Cuba and Brazil," Dr van der Ent says.

He estimated that of the 300,000 known plant species on Earth, only about 700 had hyperaccumulating properties.

Of those, about two-thirds fed exclusively on nickel, including three species in New Caledonia where the concentration of nickel in their sap was around 25 percent.

Cuttings from these woody plants can be dried and incinerated into ash. That ash is known as "bio-ore".

Nickel is where the most potential lies, he says.

As an important component in the production of modern lithium-ion batteries and stainless steel, it's a much sought-after element.

A demonstration "metal farm" in Malaysia, developed by researchers from the University of Lorraine, has been up and running for the past five years.

The farm has reported continuous yields of between 200 to 300 kilograms of nickel per hectare, per year.

While the results from Malaysia are promising, commercialisation is still some way off, says Dr van der Ent. He and his colleagues in Brisbane are looking for an industry partner.

"Most of the nickel [in use today] comes from countries like Indonesia and New Caledonia where it has been mined at fairly great environmental cost," he said.

"So, we hope this could be part of the strategy to source nickel in a more environmentally sustainable way."

A tool for rehabilitation

Exactly why these plants developed the ability to absorb large amounts of metal is still a cause of speculation. All plants need some trace elements to grow, but the levels found in hyperaccumulators would normally be toxic for plant life. 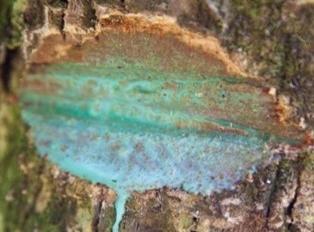 The University of Melbourne's Professor Baker said it may be an evolutionary defense mechanism.

"There are a number of theories that have been put out but the most plausible one is that they do provide some protection against grazing insects and grazing animals," he says.

"That has been shown to happen experimentally under lab conditions and there is also evidence from the field."

"Where you've had strip mining for nickel, which is a common practice in tropical regions, you could integrate the metal farming as part of the progress of rehabilitation," he says.

"Typically rehabilitation costs money, and this is a strategy where you could actually offset some of those costs as part of the rehabilitation program."

"It does give lots of potential, I think, for areas which are inappropriate for normal agriculture," he says.

Many people in developing countries, he says, are deficient in zinc and selenium, both of which are essential for good health.

"We could actually use zinc and selenium hyperaccumulator plants to produce biomass that is enriched in these elements," Dr van der Ent says.

This biomass, he says, could be turned into a supplement for people to consume, or could be used in a process called biofortification to increase the concentration of zinc or selenium in staple crops.

And that, Dr van der Ent says, would provide a unique opportunity for Australian agriculture.

The soil in large parts of central Australia is rich in selenium, and the plants that grow there have shown themselves to be extremely efficient hyperaccumulators.

So, the future of farming could be as much about harvesting metal as raising cattle and growing grain.