India reported a record rise in Covid-19 infections on Monday, becoming the second country after the United States to post more than 100,000 new cases in a day, as politicians stage massive election rallies raising fears of further spreading the virus. 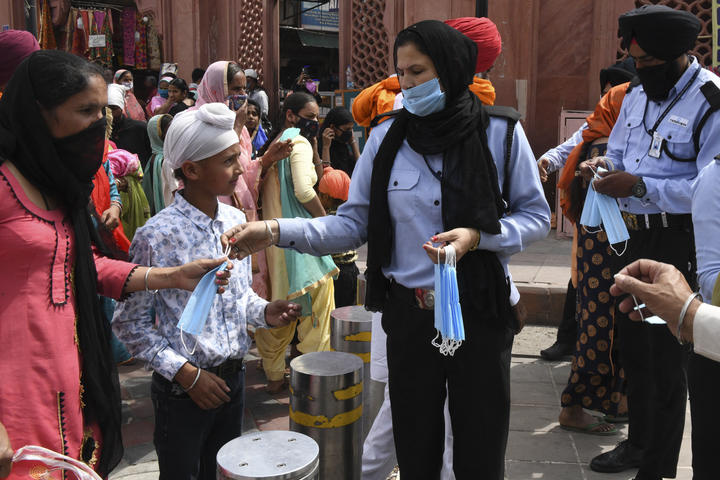 Private security guards distribute facemasks to people during an awareness campaign against the spread of the Covid-19 coronavirus, in Amritsar on 4 April 2021. Photo: AFP

Hospitals in the worst affected state, Maharashtra, are being overrun by patients. India's richest state, home to its commercial capital Mumbai and numerous industries, reported a record 57,074 new cases overnight.

The country's daily infections have risen about 12 fold since hitting a multi-month low in early February, when authorities eased most restrictions and people largely stopped wearing masks and following social distancing.

With 103,558 new infections, India has now reported 12.6 million cases, the highest after the United States and Brazil, data from the health ministry showed. Deaths jumped by 478, still one of the lowest fatality rates in the world, raising the total to 165,101.

India has recorded the most number of infections in the past week anywhere in the world. More infectious variants of the virus may have played a role in the second surge, some epidemiologists say.

"The new variant, or variants of concern, probably explains a lot of it, rather than simplistic explanation of behaviour," said Rajib Dasgupta, head of the Centre of Social Medicine & Community Health in New Delhi's Jawaharlal Nehru University.

India has found hundreds of cases of the virus variants first detected in the United Kingdom, South Africa and Brazil. 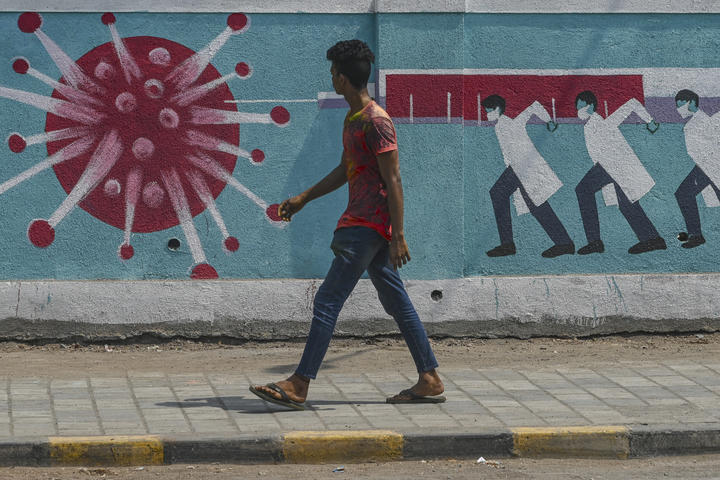 A pedestrian walks past a wall mural depicting medical staff as frontline Covid-19 warriors in Mumbai, 29 March 2021. Hospitals in Maharashtra state, home to Mumbai, are being overrun by patients. Photo: AFP

Subhash Salunke, a former WHO official who advises Maharashtra on its Covid-19 strategy, said cases in the state would continue to rise for another couple of weeks. He said a way out was vaccinating all adults in its hardest-hit cities such as Mumbai, Pune and Nashik.

"If we start doing this, by the end of April we will see a downward trend," he said.

India, the world's biggest maker of vaccines, has injected 77 million doses at home since starting its campaign in the middle of January - the third highest after the United States and China.

India's per capita Covid-19 vaccinations, however, are lower than many other countries, including that of more populated China that started giving shots to its citizens much earlier.

India is currently vaccinating only people above the age of 45, having covered health and front-line workers first with the AstraZeneca shot and a government-backed one.

"It was highlighted that all efforts are underway to secure adequate quantities of vaccines to meet the rising domestic requirements as well as to meet the genuine needs of other countries," his office said in a statement.

Though cases have risen exponentially in nearly a dozen states, politicians and ministers are still addressing election rallies attended by tens of thousands of mask-less people jostling for space.

The health minister in the northeastern state of Assam, currently voting to elect a new government, was ridiculed on social media on the weekend after saying there was no need for masks in his state and that wearing one hurts businesses like beauty parlours.

Maharashtra will start shutting shopping malls, cinemas, bars, restaurants and places of worship from Monday evening. Authorities will also impose a complete lockdown at weekends, as experts worried about a shortage of critical-care beds in hospitals, especially in its smaller cities.

The rise in cases has pulled down the stock market.