US President Joe Biden has criticised the lifting of mask requirements in the states of Texas and Mississippi, calling it "Neanderthal thinking". 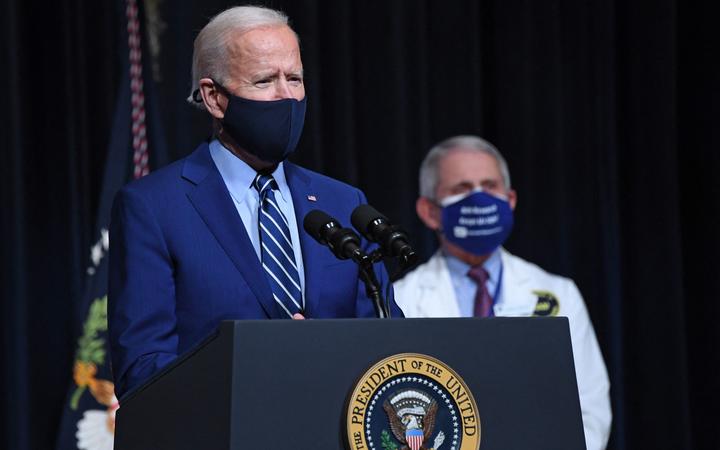 Masks, social distancing and other measures were still important, despite the role vaccines were playing in containing the pandemic, he said.

Texas and Mississippi will also allow all businesses to open at full capacity. Other states have announced a relaxation of some rules.

The US has recorded 28.7 million infections and 519,000 deaths related to Covid-19 since the pandemic began.

Some 78 million vaccine doses have been administered but Biden said this was not a reason to end public health measures.

"The last thing we need is Neanderthal thinking that in the meantime everything's fine, take off your mask, forget it," Biden said. "It still matters."

Senior health officials in his administration have warned about the continued spread of the virus - and highly contagious variants of it - hampering the progress of the country's vaccination programme.

"Now is not the time to release all restrictions," Rochelle Walensky, the director of the Centers for Disease Control and Prevention (CDC), said.

"The next month or two is really pivotal in terms of how this pandemic goes."

How did Mississippi and Texas respond?

"Mississippians don't need handlers," Reeves wrote in the tweet. "As numbers drop, they can assess their choices and listen to experts. I guess I just think we should trust Americans, not insult them."

A spokesperson for Texas Governor Greg Abbott said he was "clear in telling Texans that Covid hasn't ended".

But the spokesperson told Politico that "Texas now has the tools and knowledge to combat Covid while also allowing Texans and small businesses to make their own decisions".

"It is clear from the recoveries, the vaccinations, the reduced hospitalisations, and the safe practices that Texans are using, that state mandates are no longer needed. We must now do more to restore livelihoods and normalcy for Texans."

What restrictions have been lifted by states?

Individual states are in charge of public health policy in the US. At the start of the coronavirus pandemic, most introduced restrictions on businesses and travel.

About 35 states required face coverings to be worn in public places, although enforcement of these mask mandates has been patchy.

The governor of Texas on Tuesday issued an executive order, effective from 10 March, that rescinds most coronavirus measures.

Michigan is to ease capacity limits on restaurants, and on public and residential gatherings.

South Carolina has removed limits on large gatherings, while capacity limits on restaurants in Massachusetts were removed.

Some cities have also acted. Chicago has reopened public schools and San Francisco announced the easing of rules on museums, cinemas, gyms and indoor dining.

What are the latest Covid statistics in the US?