Gunmen have freed all 279 girls kidnapped from a boarding school in northwest Nigeria, says the governor in Zamfara state. 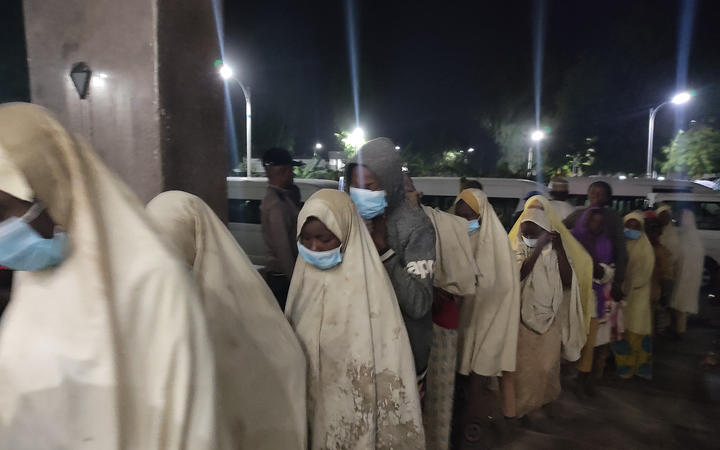 A group of girls previously kidnapped from their boarding school in northern Nigeria arrive on March 2, 2021 at the Government House in Gusau, Zamfara State upon their release. Photo: AFP / Aminu Abubakar

According to earlier reports, 317 girls from the Government Girls Science Secondary (GGSS) School in the town of Jangebe were abducted by an armed gang last week.

Zamafara state spokesperson Sulaiman Tanau Anka told Reuters that some of the missing girls had run into the bush at the time of the assault, and the number of those kidnapped was 279. All had now been freed, Zamfara Governor Bello Matawalle said.

Reuters journalists in Jangebe saw dozens of girls in Muslim veils sitting in a hall in a state government building.

"Alhamdulillah! It gladdens my heart to announce the release of the abducted students of GGSS Jangebe from captivity," Matawalle said earlier on Twitter.

"This follows the scaling of several hurdles laid against our efforts. I enjoin all well-meaning Nigerians to rejoice with us as our daughters are now safe," he said.

Schools have become targets for mass kidnappings for ransom in northern Nigeria by armed criminal groups, in a trend started by the group Boko Haram, and later its offshoot Islamic State West Africa Province.

The government has repeatedly denied paying ransoms. But President Muhammadu Buhari issued a statement on Friday in which he urged state governments "to review their policy of rewarding bandits with money and vehicles", warning that the policy might boomerang disastrously.

The raid in Zamfara state was the second such kidnapping in little over a week in the northwest, a region increasingly targeted by criminal gangs. On Saturday, gunmen released 27 teenage boys who were kidnapped from their school on 17 February in the north-central state of Niger.

In 2014, Boko Haram abducted more than 270 schoolgirls from the northeastern town of Chibok, in Nigeria's most high profile school kidnapping. About 100 of them remain missing.