Billionaire casino magnate Sheldon Adelson, whose gambling and hotel businesses turned him into a major political power broker in the US and Israel, has died. 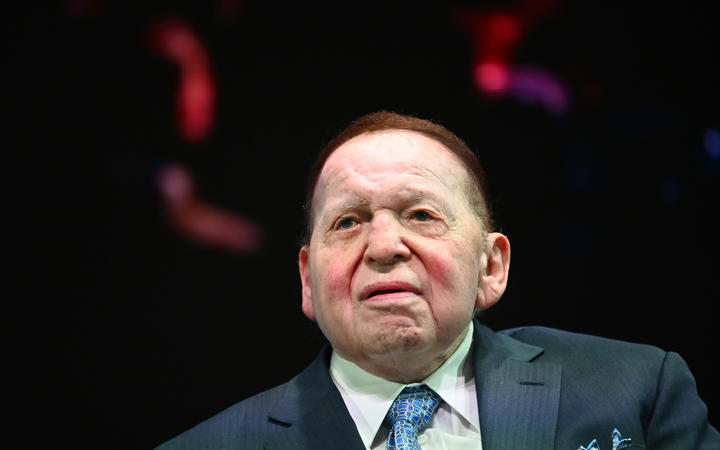 Sheldon Adelson was known for his support of conservative causes and Israel. Photo: AFP

The founder of the Las Vegas Sands casino company, Adelson was known for his support of conservative causes and Israel.

He was a significant backer of US President Donald Trump and Israeli Prime Minister Benjamin Netanyahu.

His death was caused by complications related to his treatment for non-Hodgkin's lymphoma, the Las Vegas Sands company said in a statement.

In a statement, former US president George W Bush said he mourned the passing of a "friend".

"He was an American patriot, a generous benefactor of charitable causes, and a strong supporter of Israel," Bush said. "He will be missed by many - none more than his beloved family."

Prime Minister Benjamin Netanyahu:
"Sara and I are heartbroken by the passing of Sheldon Adelson.

He was a wonderful friend to us personally and an incredible champion of the Jewish people, the Jewish state and the alliance between Israel and America.

"He was a wonderful friend to us personally and an incredible champion of the Jewish people, the Jewish state and the alliance between Israel and America," he said.

Born in 1933, Adelson was raised in Boston, the son of Jewish immigrants, whose father worked as a cab driver.

He started working at a young age, selling newspapers on street corners as a teenager.

A college dropout, who founded dozens of businesses, he launched the career for which he became known as the organiser of a successful computer business conference in the 1970s.

Looking for more space to host visitors for the event, he later entered the hospitality business, buying the Sands hotel.

He was credited with fusing together the convention, hotel and gaming industries, as he built lavish complexes in Las Vegas, Singapore and Macau that at his death made him ranked among the 30 richest men in the world, with a net worth of more than $30bn.

Adelson put that wealth to work for causes he supported, including medical research, Jewish youth groups, universities and others.

Adelson had his hand in media, as the founder of the free Israel Hayom paper in Tel Aviv and the owner of the Las Vegas Review-Journal, which he purchased in 2015.

He also donated hundreds of millions of dollars to Republicans and conservative groups over the last two decades, including more than $25m to President Donald Trump, who awarded Adelson's wife the Medal of Freedom in 2018.

"I'm against very wealthy people attempting to or influencing elections. But as long as it's doable, I'm going to do it," Adelson told Forbes magazine in 2012, a year in which he spent some $90m in an effort to stop the re-election of Barack Obama.

Adelson's influence was credited, in part, for pushing Trump to establish the American embassy in Jerusalem and for leading him to withdraw from a nuclear weapons treaty with Iran negotiated by Obama.

Trump said Adelson had "tirelessly advocated for the relocation of the United States embassy to Jerusalem, the recognition of Israeli sovereignty over the Golan Heights, and the pursuit of peace between Israel and its neighbours".

"Sheldon lived the true American dream," he said. "His ingenuity, genius, and creativity earned him immense wealth, but his character and philanthropic generosity his great name."

Adelson was infamous for his fights, which included court battles against journalists, former business associates and his own sons. His firm also became the target of government investigations, paying millions to settle claims of violations of corruption laws, among other inquiries.

In 2012, the New York Times editorial board, known for its liberal slant, described Adelson as the "perfect illustration of the squalid state of political money, spending sums greater than any political donation in history to advance his personal, ideological and financial agenda, which is wildly at odds with the nation's needs."

In a statement, his wife Miriam remembered his kinder side, pointing to his anonymous donations and decision to continue paying Las Vegas Sands staff, despite the hit to business caused by the pandemic.

"Although bluff in build and speech - and, in the last two decades, beset by painful sickness - Sheldon was always sensitive to the needs of others," she said, referring to a condition that made it hard for Adelson to walk.

"For Sheldon, recognition of his own indispensable role was unimportant. What counted was that good be done. He cared about standing up for what was right, even if that meant standing alone."