A woman has died after being shot during the storming of the US Capitol by supporters of President Donald Trump, the Washington police department says. 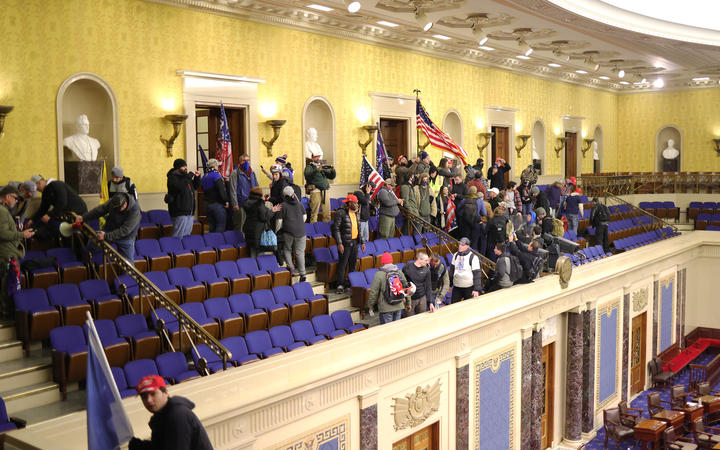 No other details were available, the spokesperson said. It remained unclear who shot the woman, but a witness said the shooting occurred after law enforcement authorities urged people to "get back."

Hundreds of Trump supporters entered the Capitol building in a bid to overturn his election defeat, forcing Congress to postpone a session that would have certified Democratic President-elect Joe Biden's victory in the 3 November election.

A protester from New Jersey told Washington CBS affiliate WUSA he witnessed the woman being shot at the Capitol after police and other law enforcement officials warned people to get back.

"Well, we had stormed into the chambers inside, and there was a young lady who rushed to the windows; a number of police and Secret Service were saying, 'Get back, get down, get out of the way,'" he said.

"She didn't heed the call and as we kind of raced up to grab people and pull them back, they shot her in the neck, and she fell back on me."

The man told the local television station he saw blood coming from the woman's mouth and neck and nose.

"It could have been me, but she went first," he said.