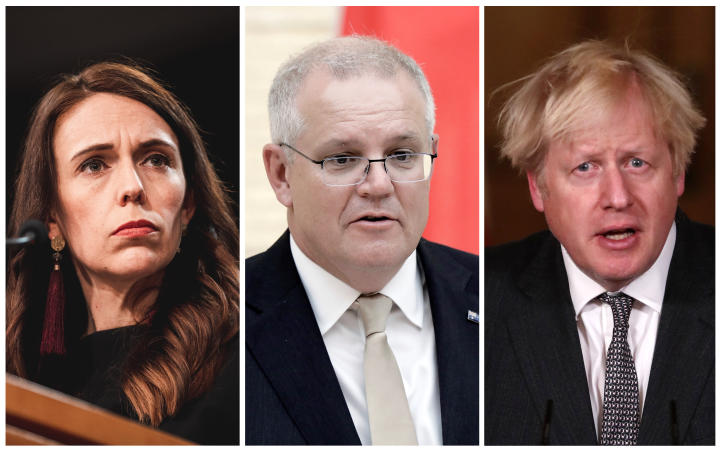 In dramatic scenes, demonstrators swarmed the building as Congress members were escorted out by police.

Biden said it was an "insurrection", and Trump released a video message asking supporters to go home.

The joint session of Congress certifying Biden's win has been suspended and forced into recess.

The BBC says there are reports of guns drawn in the building and at least one person shot. A woman was reported to have died.

There has been an armed confrontation at the doors of the House of Representatives. Tear gas has also been used.

Former Republican President George W. Bush condemned the rioting, saying he was appalled by the "reckless behaviour of some political leaders since the election."

"It is a sickening and heartbreaking sight," Bush said in a statement. "This is how election results are disputed in a banana republic - not our democratic republic."

He said the violent assault on the Capitol was undertaken by "people whose passions have been inflamed by falsehoods and false hopes. Insurrection could do grave damage to our nation and reputation."

Prime Minister Jacinda Ardern says what is happening the US capital is an attack on democracy by a mob.

Democracy - the right of people to exercise a vote, have their voice heard and then have that decision upheld peacefully should never be undone by a mob. Our thoughts are with everyone who is as devastated as we are by the events of today. I have no doubt democracy will prevail.

Minister of Foreign Affairs Nanaia Mahuta tweeted they regret seeing the violence unfold and looked forward to a peaceful transition.

We regret unfolding events in Washington DC. Our thoughts are with the American people. Violence has no place in thwarting democracy. We look forward to the peaceful transition of the political administration, which is the hallmark of democracy. Kia tau ngā manaakitanga.

Former prime minister Helen Clark, who is also former head of the United Nations Development Programme, told Summer Times with Jesse Mulligan the scenes unfolding in the US were shocking.

"I'm getting messages from American friends who are just distressed beyond belief to see what's playing out in their country and you know I think we all feel this is just a very, very sad day for the United States."

Clark said she did not expect it to come to this, although it was obvious that Trump supporters would be rarked up for the rally.

"But it's one thing to do that and exercise your freedom to speak and assemble, it's another then for a violent mob to march on the capital, invade the parliament, trash the offices, stop the lawmakers doing their constitutional duty to certify the Electoral College results - I think that's unprecedented in the United States of America."

Clark said the international community was looking on aghast.

What is happening in Washington is a violent assault on democracy.

It was incited by Donald Trump.

The US Congress must impeach him for his role in this assault on the Capitol.

Peace and the rule of law must be restored immediately ✊

What we are seeing in the US is a disgraceful attack on democracy. The @NZNationalParty supports the peaceful and orderly transition of power.

Very distressing scenes at the US Congress. We condemn these acts of violence and look forward to a peaceful transfer of Government to the newly elected administration in the great American democratic tradition.

How world leaders and politicians reacted

Swedish Prime Minister Stefan Lofven in a tweet described the incidents as "an attack on democracy". "President Trump and many members of Congress bear significant responsibility for what's now taking place. The democratic process of electing a president must be respected."

British Prime Minister Boris Johnson in a tweet described the scenes in the U.S. Congress as a "disgrace", saying the United States stood for democracy around the world and that was it was "vital" now that there should be a peaceful and orderly transfer of power.

Disgraceful scenes in U.S. Congress. The United States stands for democracy around the world and it is now vital that there should be a peaceful and orderly transfer of power.

Japan's chief cabinet secretary Katsunobu Kato said: "We decline to comment on President Trump's political style as this is about US domestic affairs.

"But we hope to see democracy in the United States overcome this difficult situation, calmness and harmony regained, and a peaceful and democratic transfer of power."

Indian Prime Minister Narendra Modi said in a tweet: "Distressed to see news about rioting and violence in Washington DC. Orderly and peaceful transfer of power must continue. The democratic process cannot be allowed to be subverted through unlawful protests."

Israeli Foreign Minister Gabi Ashkenazi on Twitter said: "Since its independence, America, our great and true friend, has been a beacon of democracy, and stood for the values of freedom, justice and independence.

"I am sure that the American people and their elected representatives will know how to fend off this attack and will continue to defend the values on which the United States was founded."

The Chinese embassy issued an advisory on its website on Wednesday warning Chinese citizens to strengthen safety precautions in light of a "large-scale demonstration" in Washington DC and a curfew announced by the local government.

German Foreign Minister Heiko Maas said democracy's enemies would be cheered by scenes of violence at the United States Capitol, and he called on Trump to accept US voters' decision.

In a Tweet posted after protesters stormed the seat of the US legislature, Maas said the violence had been caused by inflammatory rhetoric.

"Trump and his supporters must accept the decision of American voters at last and stop trampling on democracy."

"Quite Maidan-style pictures are coming from DC," Russia's deputy UN Ambassador Dmitry Polyanskiy posted on Twitter, referring to protests in Ukraine that toppled Russian-backed President of Ukraine Viktor Yanukovich in 2014.

"Some of my friends ask whether someone will distribute crackers to the protesters to echo Victoria Nuland stunt," he said, citing a 2013 visit to Ukraine when then-US Assistant Secretary of State Victoria Nuland offered food to protesters.

“Trump and his supporters should finally accept the decision of the American voters and stop trampling on democracy.” #capitol #CapitolBuilding https://t.co/gXr6Jx0B2N

Germany's Vice-Chancellor Olaf Scholz said the images of the scene were disturbing.

“The images reaching us from the #Capitol are disturbing. This is an intolerable assault on democracy. President #Trump has deeply divided the country - now it shows. @JoeBiden has a tough task ahead of him to bring Americans back together.” https://t.co/DjVRHTRILX

NATO Secretary-General Jens Stoltenberg called the violent protests in Washington "shocking scenes" and said the outcome of the democratic US election must be respected.

Spanish Prime Minister Pedro Sanchez said in a tweet: "I am following with concern the news that are coming from Capitol Hill in Washington. I trust in the strength of America's democracy.

"The new Presidency of @JoeBiden will overcome this time of tension, uniting the American people."

"Obviously we're concerned and we're following the situation minute by minute," Trudeau told the News 1130 Vancouver radio station. "I think the American democratic institutions are strong, and hopefully everything will return to normal shortly."

Foreign Minister Francois-Philippe Champagne on Twitter: "Canada is deeply shocked by the situation in Washington DC. The peaceful transition of power is fundamental to democracy - it must continue and it will. We are following developments closely and our thoughts are with the American people."

Finnish Prime Minister Sanna Marin said in a statement: "The attack on Capitol Hill in Washington DC is a very serious and worrying matter. It shows how important it is to firmly and strongly defend democracy at all times."

Turkey's foreign ministry issued a statement expressing concern about the violence and called for calm and common sense while urging its citizens to avoid crowds and the protest area.

"We call on all parties in the U.S. to maintain restraint and prudence. We believe the U.S. will overcome this internal political crisis in a mature manner."

The Speaker of the country's Grand National Assembly also tweeted out, calling for the restoration of calm.

We follow the events in the USA with concern and invite the parties to calmness. We believe that problems will always be solved within law and democracy. As Turkey, we have always been in favor of the law and democracy and we recommend it to everyone.

French Foreign Minister Jean-Yves Le Drian said on Twitter: "The violence against the American institutions is a grave attack on democracy. I condemn it. The will and the vote of the American people must be respected."

Charles Michel, chairman of EU leaders, on Twitter expressed his shock at the scenes in Washington. "The US Congress is a temple of democracy...We trust the US to ensure a peaceful transfer of power to @JoeBiden"

European Commission President Ursula von der Leyen said: "I believe in the strength of US institutions and democracy. Peaceful transition of power is at the core. @JoeBiden won the election. I look forward to working with him as the next President of the USA."

Venezuelan Foreign Minister Jorge Arreaza tweeted: "Venezuela expresses its concern for the violent events that are taking place in the city of Washington, USA; condemns the political polarization and hopes that the American people will open a new path toward stability and social justice."

President of the European Parliament David Sassoli said he was also deeply concerned.

Deeply concerning scenes from the US Capitol tonight. Democratic votes must be respected. We are certain the US will ensure that the rules of democracy are protected.

Norwegian Prime Minster Erna Solberg posted on Twitter: "This is an unacceptable attack on the U.S. democracy. President Trump is responsible for stopping this. Scary images, and unbelievable that this is happening in the United States."

Ireland's foreign minister Simon Coveney called the scenes in Washington "a deliberate assault on Democracy by a sitting President & his supporters, attempting to overturn a free & fair election! The world is watching! We hope for restoration of calm."

Argentine President Alberto Fernandez tweeted: "We express our condemnation of the serious acts of violence and the affront to Congress that occurred today in Washington DC. We trust that there will be a peaceful transition that respects the popular will and we express our strongest support for President-elect Joe Biden."