A four-year-long investigation into "extremely serious" actions by Australian troops in Afghanistan is reported to recommend prosecutions or sanctions against more than 15 people. 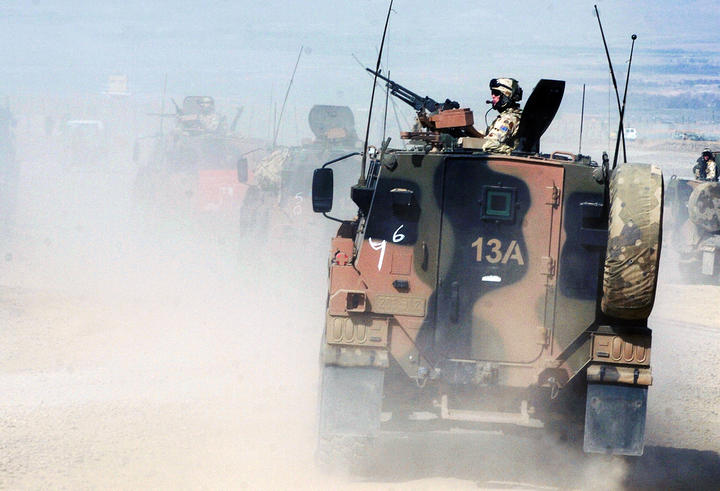 "I intend to speak about the key findings once I have read and reflected on the report," General Campbell said in a statement.

"Welfare and other support services are available to those affected by the Afghanistan Inquiry."

Sources have told the ABC the final report recommends further action, such as criminal prosecutions or military sanctions, for around 10 incidents involving between 15 and 20 people.

In 2016 the Inspector-General of the Australian Defence Force (IGADF) began examining allegations of unlawful killings and other possible breaches of the law of armed conflict committed mainly by elite soldiers during their lengthy military engagement.

Since that time, New South Wales Justice Paul Brereton, a Major General in the Army Reserve, has interviewed hundreds of witnesses behind closed doors and his secretive inquiry has even gathered evidence overseas.

Earlier this year the IGADF revealed 55 separate potential breaches of the laws of armed conflict by Australia's Special Operations Task Group (SOTG) had been identified between 2005 and 2016.

The IGADF noted its inquiry was not focused on decisions made during the "heat of battle" but rather the treatment of individuals who were clearly non-combatants or who were no longer combatants.

Senior Army figures estimate that during the 12-year Afghanistan deployment, Australian personnel are believed to have killed over 5000 individuals who were mainly suspected Taliban fighters, but also numerous innocent civilians.

Today I have received the Afghanistan Inquiry report from the Inspector-General of the Australian Defence Force. I intend to speak about the report’s findings once I have read and reflected on the report.

Last month, Chief of Army Lieutenant General Rick Burr wrote to members of the force warning that allegations contained in the IGADF report were "extremely serious and deeply troubling".

"They do not reflect who we aspire to be. We will act on the findings when they are presented to the Chief of the Defence Force," he wrote.

Sweeping changes to Australia's Special Forces, particularly the SASR, are now being considered by army and the government, following the completion of the Brereton inquiry.

Defence insiders believe the changes are aimed at breaking down systemic cultural issues within the special forces teams.

At the same time as the IGADF has conducted its closed-door inquiry, a series of explosive reports about the conduct of troops have made very public the extent of the allegations against Australian soldiers.

Earlier this year the ABC's Four Corners programme broadcast video showing a Special Air Service Regiment (SASR) soldier shooting an unarmed Afghan man three times in the chest and head while he cowered on the ground in 2012.

Just days after the "serious and disturbing" revelations the SAS member known as "Soldier C" was suspended from duty, and the Defence Minister referred the matter to the AFP Commissioner.

In 2016, Commando Kevin Frost became the first Special Forces soldier to go public with allegations of Australian war crimes in Afghanistan, including his own involvement in the unlawful execution of a prisoner of war.

Sergeant Frost, who had encouraged other members of the ADF to come forward to the IGADF inquiry, was found dead in Western Australia last year.

In September this year the Federal Court was told of a separate war crime investigation involving Victoria Cross recipient Ben Roberts-Smith, who was decorated for his service with the SAS in Afghanistan.

Central to the allegations against the former soldier is a claim that while in Uruzgan Province in September 2012, he was involved in the murder of a handcuffed Afghan civilian named Ali Jan, who he kicked off a cliff.

Roberts-Smith strenuously denies the allegations and is pursuing a defamation claim against various news outlets which published the claims in 2018.

Hundreds of secret ADF documents leaked to the ABC in 2017 detailed the clandestine operations of Australia's elite special forces in Afghanistan, including incidents of troops killing unarmed men and children.

Two years later AFP officers raided the ABC's Sydney headquarters over the stories known as the Afghan Files, but eventually decided that journalists Dan Oakes and Sam Clarke would not be prosecuted for their reporting.

He commissioned Canberra-based sociologist Dr Samantha Crompvoets to write a report on Special Operations Command Culture Interactions, which then uncovered allegations of "unsanctioned and illegal application of violence on operations" by elite soldiers.

Major General Sengleman reported the findings to then-chief of army Lieutenant General Angus Campbell, who agreed in 2016 to approach the IGADF to conduct a scoping inquiry.

Speaking at a Defence conference that year, Major General Sengleman gave an indication of the high level of operational tempo for Australia's Special Forces during their 12 years in Afghanistan.

"Thousands of combat missions, almost half of the combat deaths, 13 percent of my deployed force sustained physical combat injuries."