Prime minister Boris Johnson has ordered England back into a national lockdown as the United Kingdom passed the milestone of one million Covid-19 cases and scientists warned the virus was spreading faster than their worst predictions. 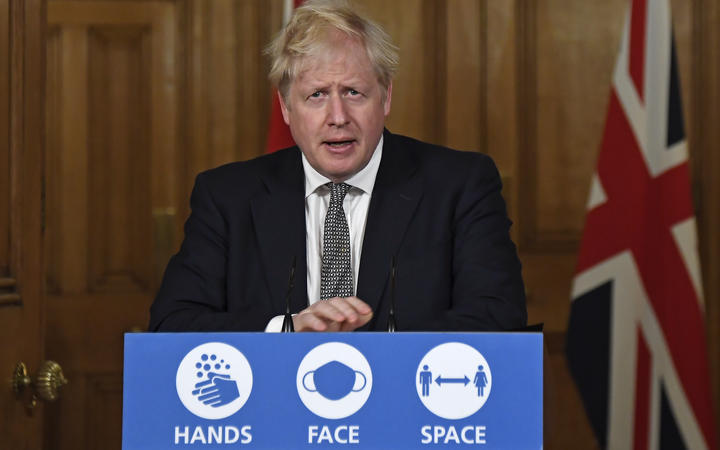 The United Kingdom, which has the biggest official death toll in Europe from Covid-19, is grappling with more than 20,000 new coronavirus cases a day and scientists have warned the "worst case" scenario of 80,000 dead could be exceeded.

Johnson said the second national lockdown for England was to prevent a "medical and moral disaster" for the National Health Service.

He said Christmas may be "very different" but he hoped taking action now would mean families can gather.

Non-essential shops and hospitality will have to close for four weeks on Thursday, he said.

But unlike the restrictions in spring, schools, colleges and universities can stay open.

After 2 December, the restrictions would be eased and regions would go back to the tiered system, he said.

Johnson said: "Christmas is going to be different this year, perhaps very different, but it's my sincere hope and belief that by taking tough action now we can allow families across the country to be together."

The prime minister told a Downing Street news conference that he was "truly, truly sorry" for the impact on businesses, but said the furlough system paying 80 percent of employee wages will be extended through November.

"No responsible prime minister" could ignore figures which suggested deaths would reach "several thousand a day", with a "peak of mortality" worse than the country saw in April, Johnson said.

He said hospitals even in the south-west of England, where cases are among the lowest, will run out of capacity in weeks.

Under the new restrictions:

Johnson, who chaired a cabinet meeting yesterday, will make a statement to Parliament on Monday.

The UK recorded another 21,915 confirmed coronavirus cases yesterday, bringing the total since the pandemic began to 1,011,660.

Another 326 people were reported to have died within 28 days of a positive test.

The UK is the ninth country to reach the milestone of a million cases - after the US, India, Brazil, Russia, France, Spain, Argentina and Colombia.

England's chief medical officer Professor Chris Whitty said there was a "significant rate of increase" in virus cases across the entire country.

He said the prevalence of Covid has been going up "extremely rapidly" over the last few weeks" - having been "very flat" due to social distancing measures in the spring and summer.

Prof Whitty said England has "very little headroom" when it comes to the spread of the virus.

The virus was not being constrained to one age group, and was spreading into older age groups - people over the age of 60.

He added there was a rise in the number of hospital admissions in England in "virtually every age group in older adults".

"If we do nothing, the inevitable result will be that these numbers will go up and they will eventually exceed the peak we saw in spring of this year." 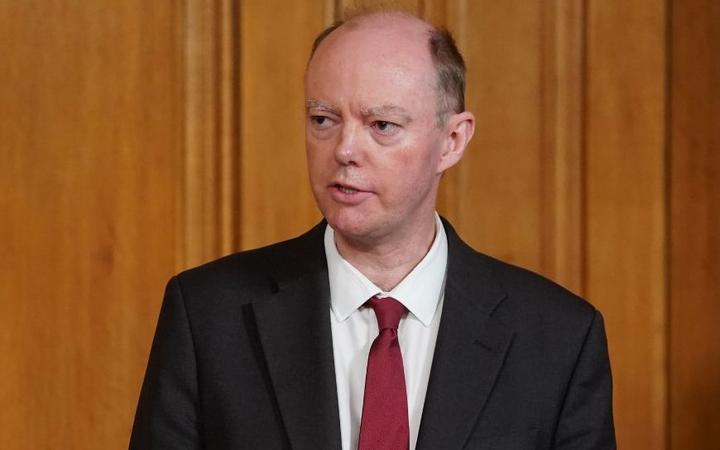 Chief science adviser Sir Patrick Vallance told the media briefing that experts created scenarios on the assumption the R rate stays at one over the course of the winter.

"What is clear from all the scenarios is the potential for this to be twice as bad or more compared to the first wave."

Johnson was criticised by political opponents for moving too slowly into the first national lockdown, which stretched from 23 March to 4 July. He fell ill with Covid in late March and was hospitalised in early April. 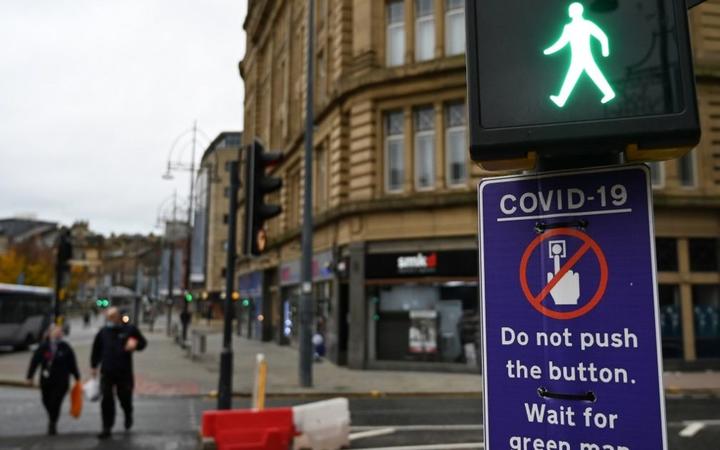 A warning sign for pedestrians in Bradford. Covid cases in England are rising at a faster pace than experts' worst predictions. Photo: AFP

The measures will bring England into alignment with France and Germany by imposing nationwide restrictions almost as severe as the ones that drove the global economy earlier this year into its deepest recession in generations.

Scotland, Wales and Northern Ireland run their own pandemic policies.

A national lockdown represents a dramatic change of policy for the prime minister, who has been saying for months that it will not be necessary.

Two weeks ago he defended his strategy of a patchwork of local restrictions by saying he wanted to avoid the "misery of a national lockdown". Currently, areas of England are subject to one of three tiers of coronavirus restrictions.

The prime minister was hugely critical of Labour for suggesting one. Several Conservative backbenchers are opposed to national measures.

Calum Semple, professor of outbreak medicine at the University of Liverpool and member of the government's Scientific Advisory Group for Emergencies (SAGE), said the second wave of Covid-19 was a reality.

"And, unlike the first wave, where we had a national lockdown which protected huge swathes of society, this outbreak is now running riot across all age groups," he told the BBC.

A new lockdown will heap more pressure on finance minister Rishi Sunak and the Bank of England to increase their already huge support for the UK economy, the world's sixth-biggest. The economy slumped a record 20 percent in the spring and has been struggling to maintain its recovery.

So far the United Kingdom has reported 46,555 Covid-19 deaths - defined as those dying within 28 days of a positive test. A broader measure of those with Covid-19 on their death certificates puts the toll at 58,925.