France has introduced curfews in major cities and other European nations are closing schools, bars and restaurants and cancelling operations as authorities battle a second wave of Covid-19 at the onset of winter. 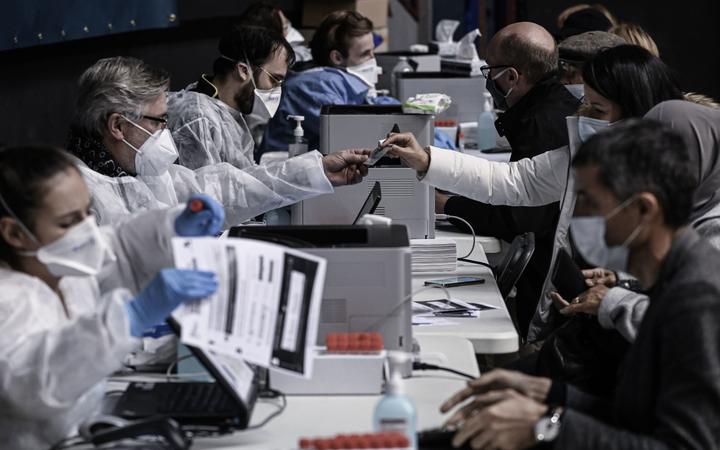 Health workers speak to people prior to being tested for Covid-19 at Lyon's sports arena Palais des Sports, which has been turned into a huge testing centre, Photo: AFP

French President Emmanuel Macron announced that people must stay indoors from 9pm to 6am in Paris and eight other cities.

The curfew will come into effect from Saturday and last for at least four weeks, Macron said in a televised interview. A state of emergency has also been declared.

A further 22,951 infections were confirmed on Wednesday.

A partial lockdown comes into force in the Netherlands at 11pm local time and cafes and restaurants are closing.

Spain's north-eastern region of Catalonia said that bars and restaurants will close for 15 days from Thursday.

European infections have been running at an average of almost 100,000 a day - about a third of the global total.

The United Kingdom, France, Russia and Spain accounted for more than half of Europe's new cases in the week to 11 October, according to the World Health Organisation.

Europe has by a wide margin overtaken the United States, where more than 51,000 Covid-19 infections are reported on average every day. While 22 states have so far in October set records for increases in new cases, deaths are trending downward and have averaged 700 a day over the last week.

Most European governments eased lockdowns over the summer to start reviving economies already battered by the pandemic's first wave. 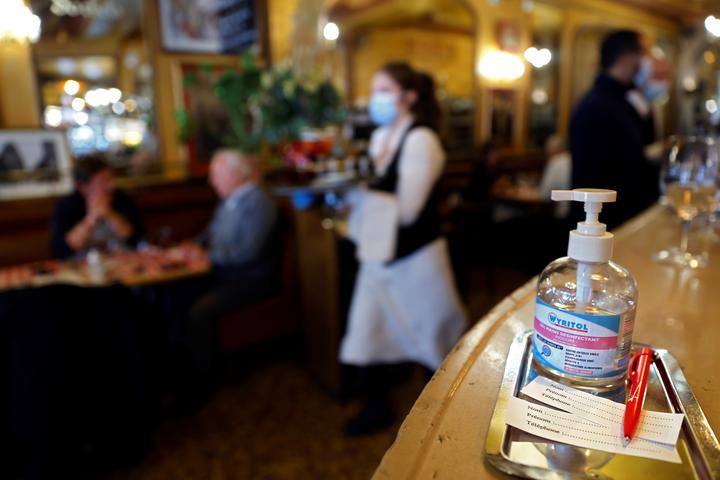 Hand sanitiser on the bar of a restaurant in Paris where a four-week overnight curfew has been announced to fight the rapid spread of Covid-19. 14 October 2020. Photo: AFP

But the return of normal activity - from packed restaurants to new university terms - fuelled a sharp spike in cases all over the continent.

Bars and pubs were among the first to shut or face earlier closing in the new lockdowns, but now the surging infection rates are also testing governments' resolve to keep schools and non-Covid-19 medical care going.

The Czech Republic, with Europe's worst rate per capita, has shifted schools to distance learning and plans to call up thousands of medical students. Hospitals are cutting non-urgent medical procedures to free up beds.

"Sometimes we are at the edge of crying," said Lenka Krejcova, a head nurse at Slany hospital near Prague, as builders hurried to turn a general ward into a Covid-19 department.

Poland is ramping up training for nurses and considering creating military field hospitals, Moscow is to move many students to online learning, and Northern Ireland is closing schools for two weeks and restaurants for four.

"I don't have any good information. We are on the brink of disaster," said immunologist Pawel Grzesiowski in Poland, which reported a record 6,526 infections and 116 deaths on Wednesday.

Major European economies such as Germany, England and France have so far resisted pressure to close schools, but in Germany, politicians are debating whether to extend the Christmas-New Year school break to reduce contagion. The Netherlands' return to partial lockdown has not included shutting schools.

In Lisbon, football fans were unsurprised after Portugal captain Cristiano Ronaldo tested positive, saying it simply showed everyone was at risk of getting infected - and famous athletes were no exception.

Even Pope Francis was subject to new coronavirus rules, staying at a safe distance from well-wishers at his weekly audience on Wednesday.

British Prime Minister Boris Johnson faces opposition calls for another national lockdown in England, but has so far resisted. Hospital admissions, however, are climbing and field hospitals constructed in the spring are once more being readied.

In Belgium, with Europe's second worst infection rate per capita, hospitals must now reserve a quarter of their beds for Covid-19 patients.