US President Donald Trump has made his first public appearance since returning to the White House from a three-day stay in hospital for Covid-19, even as his aides remained silent on whether he is still contagious. 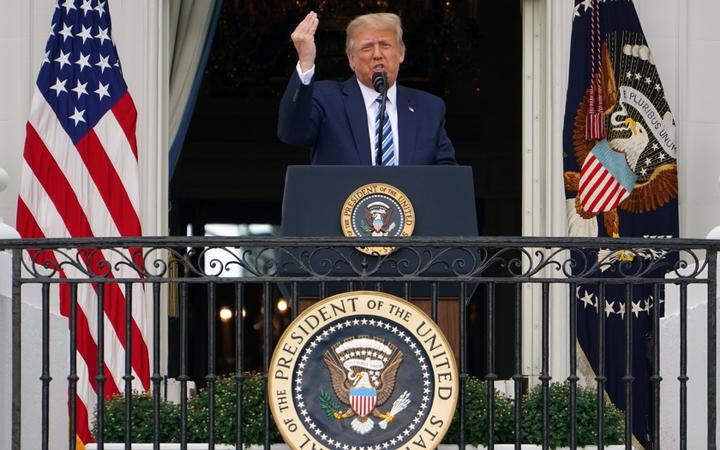 The maskless president seemed to be back on the campaign trail for the first time since his hospital stay, though the event was officially a "peaceful protest".

The president, who says he is no longer taking medicines against Covid-19, told the crowd he was "feeling great".

American science and medicine would "eradicate the China virus", the president said.

Speaking without hesitation, Trump appeared to be back to his usual rallying form, boasting about his record and hurling unsubstantiated allegations against his opponents as a packed crowd of supporters chanted, "We love you."

Trump, who has campaigned on a law-and-order theme during recent months of sometimes violent protests for racial justice, told the gathering that the Republican Party had the support of America's police forces.

"We have law enforcement watching," he said. "We're on the side of right." 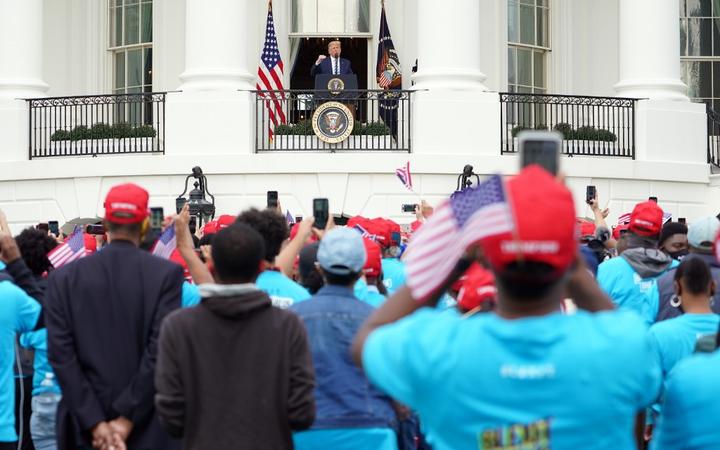 Supporters, many not wearing masks, listen to the president's speech. Photo: AFP

It is just over a week since Trump announced he had tested positive for coronavirus. He said yesterday he was awaiting a fresh test result, and the White House has not provided an update on his health since Friday.

Trump's doctors have cleared him to hold public events, 24 days before he faces Democratic rival Joe Biden in the presidential election on 3 November.

Today's White House gathering was partly organised by a foundation called "Blexit", which aims to get black and Latino voters to support the Republican party.

The president railed against his presidential rival Joe Biden, describing the Democrats' programme as "beyond socialism - Communist, that's about right".

Trump repeated his previous assertion that he had done more for the black community than any president since Abraham Lincoln.

Trump has been criticised for using the White House for political events, such as when he accepted his party's renomination for president from the South Lawn back in August.

The president says he is planning to attend a "big rally" in Florida - a battleground state in next month's presidential election - on Monday.

Polling suggests Biden has a single-digit lead over Trump while an ABC News/Ipsos poll found that just 35 percent of Americans approved of how Trump has handled the coronavirus crisis.

However US presidential elections are in practice determined in key states where both candidates stand a chance of winning, rather than by the total number of votes won, as Hillary Clinton found to her cost in 2016. 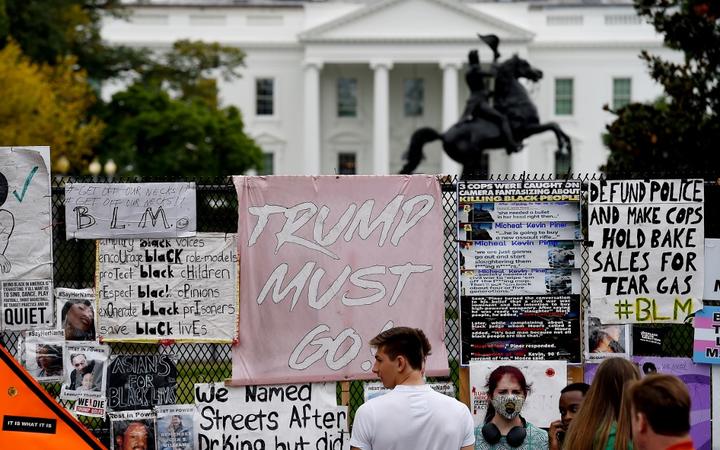 Protesters made their feelings clear outside the perimeter of the White House. Photo: AFP

What is the latest on the president's health?

Trump told Fox News that he was feeling "really, really strong" and was no longer on medication, having had his "final doses of just about everything".

On Friday the president's doctor Sean Conley said that it would be safe for him to return to public engagements yesterday as that would mark "day 10" since his diagnosis on Thursday 1 October.

Following his diagnosis, Trump spent three nights in hospital and was treated with the steroid dexamethasone, the antiviral drug remdesivir and a cocktail of manufactured antibodies made by the company Regeneron.

The US Centres for Disease Control (CDC) recommends self-isolation for at least 10 days after coronavirus symptoms first appear, with more severe illness, such as that requiring hospital treatment, potentially needing up to 20 days.

What's happening at the White House?

With just over three weeks to go until the election on 3 November, Mr Trump is keen to get back on the campaign trail.

All attendees at today's event on the South Lawn were required to wear masks, given temperature checks and encouraged to social distance, said the White House.

"We're making sure we're taking precautions so that those in attendance are screened before they come in," White House communications director, Alyssa Farah, told CBS News.

"The president's at a great distance, he's going to be up on the balcony, and very, very briefly, address the supporters there."

Biden who has tested negative for Covid-19 again today expressed disbelief at the president's plans to hold rallies and criticised the Trump administration's lax stance on mask use as reckless.

"I wouldn't show up unless you have a mask and can distance," Biden said, speaking while campaigning in Las Vegas.