US President Trump has briefly left hospital in a motorcade to drive past supporters and media outside the facility where he is being treated for the coronavirus. 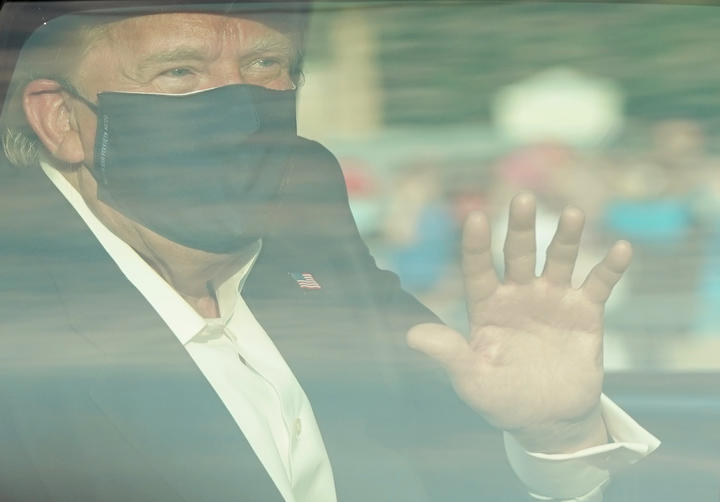 US President Donald Trump waves from the back of a car in a motorcade outside Walter Reed hospital in Maryland. Photo: AFP

Trump wore a mask as he waved from the back seat of a black SUV that crawled in a caravan of vehicles in front of the Walter Reed National Military Medical Center in Maryland. Supporters waving Trump 2020 flags chanted "USA! USA!"

Trump drives by the press and supporters outside Walter Reed hospital. pic.twitter.com/3phtKthqTH

He was driven by secret service agents wearing masks.

Reporters tweeted images of the personnel inside the SUV.

A doctor at the Walter Reed hospital where Donald Trump is being treated has strongly criticised the president's motorcade ride due to infection risk inside the car.

"That Presidential SUV is not only bulletproof, but hermetically sealed against chemical attack. The risk of Covid-19 transmission inside is as high as it gets outside of medical procedures," Dr James Philips tweeted.

He said that those inside the president's car would need to quarantine for 14 days and are at risk of getting sick.

The drive-past came shortly after Trump released a video saying he had a "surprise" for people outside the facility and that he had "learned a lot about Covid".

"I learned it by really going to school, this is the real school, this isn't the lets read the book school. And I get it, and I understand it, and it's a very interesting thing and I'm going to be letting you know about it," he said in the video.

Earlier, doctors leading his treatment said Trump had oxygen level drops on Friday and Saturday but is doing well and could return to the White House in the next day.

Doctors provided Trump supplemental oxygen twice during his battle with the lung disease, on Thursday and Friday, and have also given him dexamethasone, they told reporters the day after a series of contradictory messages from the White House caused widespread confusion about Trump's condition.

Dexamethasone is shown in studies to improve survival for patients hospitalized with critical Covid-19 who need extra oxygen. But it should not be given in mild cases since it can limit the body's own ability to combat the virus, according to guidelines from the Infectious Disease Society of America.

"The fact of the matter is that he's doing really well," Dr. Sean P. Conley told reporters at Walter Reed National Military Medical Center, where Trump has been receiving treatment since Friday.

Doctors said Trump has not run a fever since Friday and that his liver and kidney function remained normal after the second dose in a five-day course of Remdesivir, an intravenous antiviral drug sold by Gilead Sciences Inc that has been shown to shorten hospital stays.

"He received his first dose of that yesterday and our plan is to continue that for the time being," Garibaldi said.

Trump is also being given an experimental treatment, Regeneron's REGN-COV2, as well as zinc, Vitamin D, famotidine, melatonin and aspirin, his doctors have said.

Biden, who shared a debate stage with Trump last Tuesday in Cleveland, also had tested negative in two tests on Friday, the day Trump disclosed his coronavirus infection.

The campaign gave no other details when asked about the frequency of Biden's recent testing.