President Donald Trump's condition is improving as he is being treated for Covid-19 at a military hospital, and he could return to the White House as early as Monday, where his treatment would continue, the doctors leading his treatment said. 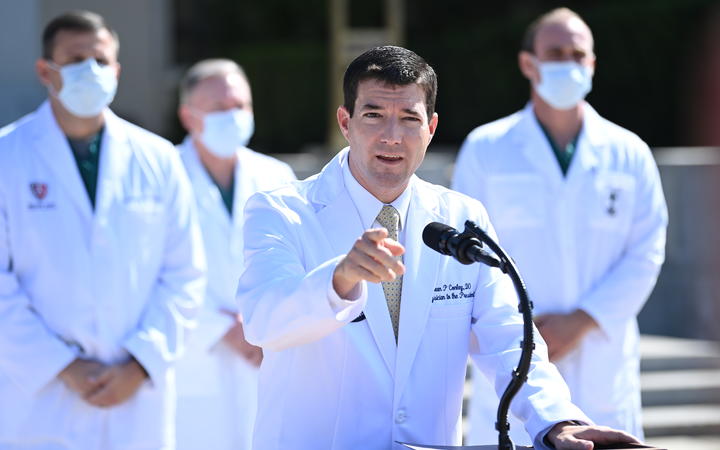 White House physician Sean Conley answers questions, surrounded by other doctors, during an update on the condition of Donald Trump Photo: AFP

Doctors provided Trump supplemental oxygen twice during his battle with the lung disease, on Thursday and Friday, and have also given him dexamethasone, they told reporters the day after a series of contradictory messages from the White House caused widespread confusion about Trump's condition.

Some hours after the briefing by his doctors Trump released a video on his Twitter feed saying he'd "learned a lot about Covid".

"I learned it by really going to school, this is the real school, this isn't the lets read the book school. And I get it, and I understand it, and it's a very interesting thing and I'm going to be letting you know about it," he said in the video.

Dexamethasone is shown in studies to improve survival for patients hospitalised with critical Covid-19 who need extra oxygen. But it should not be given in mild cases since it can limit the body's own ability to combat the virus, according to guidelines from the Infectious Disease Society of America.

"The fact of the matter is that he's doing really well," Dr. Sean P. Conley told reporters at Walter Reed National Military Medical Center, where Trump has been receiving treatment since Friday.

Doctors said Trump has not run a fever since Friday and that his liver and kidney function remained normal after the second dose in a five-day course of Remdesivir, an intravenous antiviral drug sold by Gilead Sciences Inc that has been shown to shorten hospital stays.

"He received his first dose of that yesterday and our plan is to continue that for the time being," Garibaldi said.

Trump is also being given an experimental treatment, Regeneron's REGN-COV2, as well as zinc, Vitamin D, famotidine, melatonin and aspirin, his doctors have said. 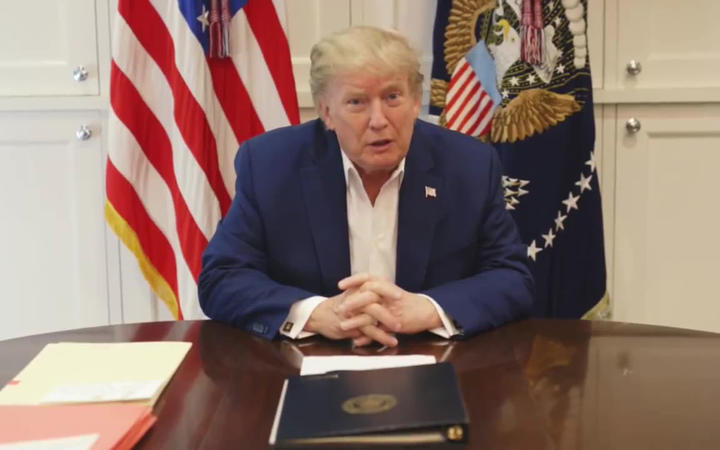 President Trump said in a video on Saturday the "real test" of his condition will come over the next few days. Photo: EyePress via AFP

Trump released a four-minute video on Saturday in which he said the "real test" of his condition will come over the next few days.

"Over the next period of a few days, I guess that's the real test, so we'll be seeing what happens over those next couple of days," Trump said into the camera, looking tired and wearing a jacket and open-necked shirt.

Trump's illness has upended the campaign ahead of the November presidential election and cast a spotlight on the president's handling of the pandemic. The Republican president is trailing Democratic rival Joe Biden in opinion polls.

A Reuters/Ipsos poll published on Sunday found that Biden had opened a 10 point lead over Trump nationally, slightly wider than it has been for the past two months. Some 65% of Americans said Trump likely would not have been infected had he taken the virus more seriously -- a view that half of registered Republicans polled supported. Some 55% said they did not believe Trump had been telling the truth about the virus.

Trump has repeatedly played down the threat of the pandemic, even as it has killed more than 208,000 Americans and hammered the U.S. economy.

'Upbeat attitude of the team'

Differing assessments of Trump's health from administration officials on Saturday left it unclear how ill the president had become since he tested positive for the coronavirus on Thursday night.

A White House team of doctors said on Saturday morning Trump's condition was improving and that he was already talking about returning to the White House.

Within minutes, White House chief of staff Mark Meadows gave reporters a less rosy assessment, saying, "The president's vitals over the last 24 hours were very concerning and the next 48 hours will be critical in terms of his care. We're still not on a clear path to a full recovery."

Meadows, whose initial comments were delivered on condition that he not be identified, altered his tone hours later, telling Reuters that Trump was doing "very well" and that "doctors are very pleased with his vital signs."

In an interview with Fox News broadcast Saturday night, Meadows revealed that Trump's condition on Friday was far worse than officials had made public, saying doctors recommended the president go to the hospital after seeing he had a fever and his blood oxygen level dropped rapidly.

Conley commented on the contradictory assessments on Sunday.

"I was trying to reflect an upbeat attitude of the team and the president about the course his illness has had," Conley told reporters on Sunday. "I didn't want to give any information that might steer the course of illness in another direction and in doing so, it came off that we were trying to hide something, which isn't necessarily true."

A crowded Rose Garden event at the White House on 26 September is under scrutiny after at least seven people who attended are confirmed to have the coronavirus. The ceremony hosted by Trump was to announce his choice of the conservative Amy Coney Barrett for the Supreme Court. 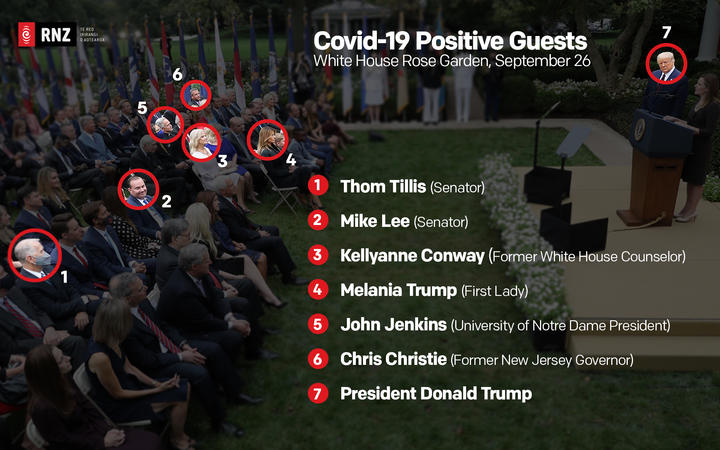 Trump's campaign vowed that Vice President Mike Pence, who would assume the presidency if Trump were unable to carry out his duties, would have an "aggressive" campaign schedule this week, as would Trump's three oldest children.

"We can't stay in our basement or shut down the economy indefinitely. We have to take it head-on," Trump campaign senior adviser Jason Miller said on ABC's "This Week" on Sunday.

With Trump off the campaign trail indefinitely, his campaign announced "Operation MAGA," based on his slogan "Make America Great Again," which will see high-profile allies including Pence and Trump's elder sons, Donald Jr. and Eric, take over in-person campaigning this week.

Biden, who largely avoided direct criticism of Trump during a campaign trip to Michigan on Friday, took a more aggressive tone on Saturday while speaking to a transit workers' union, even as he wished the president well.

"I'm in a little bit of a spot here, because I don't want to be attacking the president and the first lady now," Biden said, adding he hoped Trump and his wife Melania, who also has the illness, make a full recovery.

But he quickly turned to Trump's response to the pandemic, calling it "unconscionable" and blasting Trump's comment in an interview this summer that "it is what it is" when asked about the death toll.

Biden, who tested negative on Friday, told reporters he would next be tested on Sunday. His campaign will begin releasing the results of each test, a spokesman said.