President Trump mentioned a far-right group during the first presidential debate, kicking off online celebrations by its supporters. 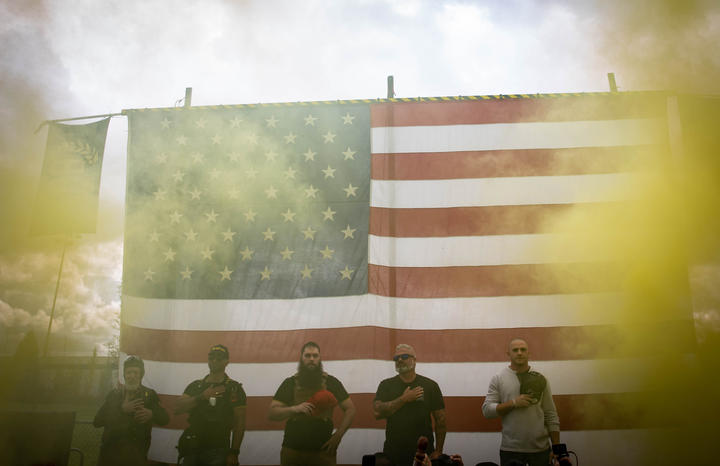 Yellow smoke fills the air as an American flag is raised at the start of a Proud Boys rally at Delta Park in Portland, Oregon on September 26, 2020. Photo: AFP / Maranie R Staab

"Proud Boys - stand back and stand by," he said, in a response to a question asking him to condemn white supremacist and militia groups. Members of the group online took the answer as a call to prepare for action.

Trump then insisted that violence was coming from far-left activists: "Somebody's got to do something about antifa and the left, because this is not a right-wing problem."

Joe Biden, the Democratic challenger, answered back: "Antifa is an idea, not an organisation. That is what [President Trump's] FBI director said."

Over the past few years, a number of fringe groups have been engaged in politically motivated violence on American streets. So who are Proud Boys and antifa?

Founded in 2016 by Canadian-British right-wing activist Gavin McInnes, the Proud Boys is a far-right, anti-immigrant, all-male group with a history of street violence against its left-wing opponents.

The group's name is a reference to a song from the musical version of the Disney film Aladdin. Members often wear black and yellow Fred Perry polo shirts along with red "Make America Great Again" hats.

A Proud Boy must declare that he is "a Western chauvinist who refuses to apologise for creating the modern world".

Their platform, such as it is, includes Trumpian ideas ("glorify the entrepreneur", "close the border") libertarianism ("give everyone a gun", "end welfare") and traditional gender roles ("venerate the housewife").

They're not exclusively white - yet have became notorious for violent political confrontations.

The Proud Boys and affiliated groups have faced off against antifa in a number of violent street rallies in the last two years, most notably in Oregon, Washington and New York. Two members were jailed last year for beating up antifa activists in New York.

Enrique Tarrio, the group's current chair, reacted to the debate on the alternative discussion network Parler: "Standing by sir.... I will stand down sir!!!" 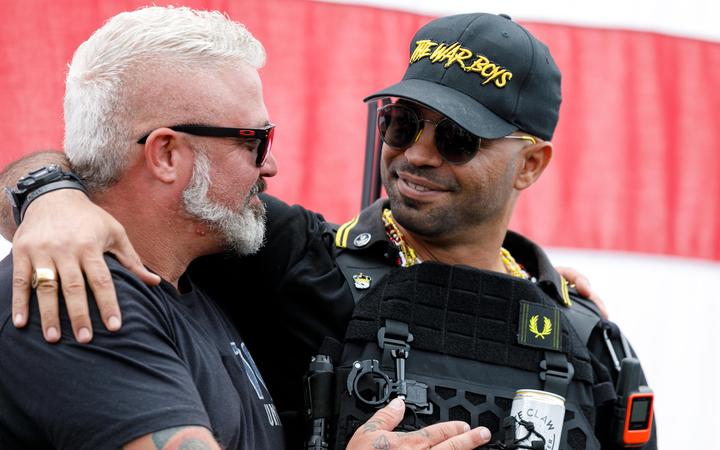 Leaders of the Proud Boys, a right-wing pro-Trump group, Enrique Tarrio (right) and Joe Biggs (left) embrace each other as the Proud boys members gather with their allies in a rally called "End Domestic Terrorism" against Antifa in Portland, Oregon on 26 September, 2020. Photo: AFP / John Rudoff / Anadolu Agency

Founder Gavin McInnes publicly disassociated himself from the group in 2018, saying that he was taking the advice of his legal team.

But in a video reacting to Tuesday's debate, he said (albeit not seeming entirely serious): "I control the Proud Boys, Donald. Do not stand down, do not stand back."

On the chat app Telegram, Proud Boys shared the debate clip along with posts taunting antifa and incorporating the phrase "stand back, stand by" into the group's logo.

Meanwhile, critics of the president loudly condemned him.

Antifa, short for "anti-fascist", is a loose affiliation of mostly far-left activists.

They include anarchists, but also communists and a few social democrats. What sets them apart is their willingness to use violence - in self-defence, they say.

The movement, which at one point almost entirely disappeared in the US, saw a surge of interest after the election of Donald Trump. They routinely clash with the far right.

The group has been prominent during Black Lives Matter protests in many major cities, and have been particularly associated with unrest in Portland, Oregon. 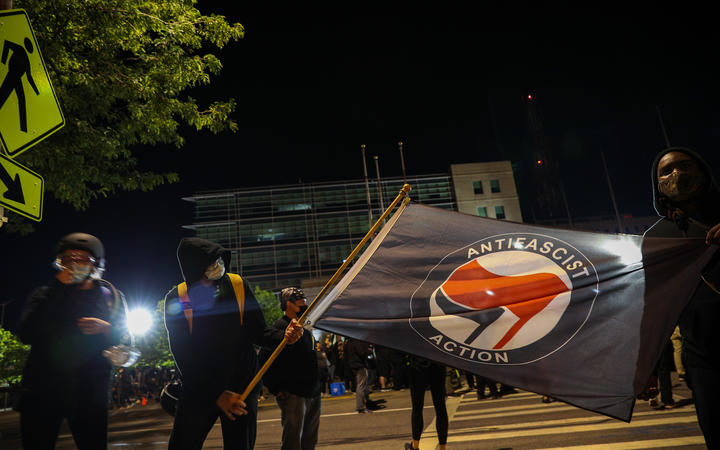 In late August, a self-described anti-fascist, 48-year-old Michael Reinoehl, shot and killed a supporter of Patriot Prayer, a Portland-area group that often marches with the Proud Boys.

Reinoehl was shot dead by police the following week.

Both groups are relatively small - and can count on, at the most, a few thousand active supporters. But their propensity for violence, particularly when they confront each other on American streets, has made them a much bigger topic of conversation than those numbers suggest.