Two people have been stabbed and seriously hurt in Paris near the former offices of the satirical magazine Charlie Hebdo. 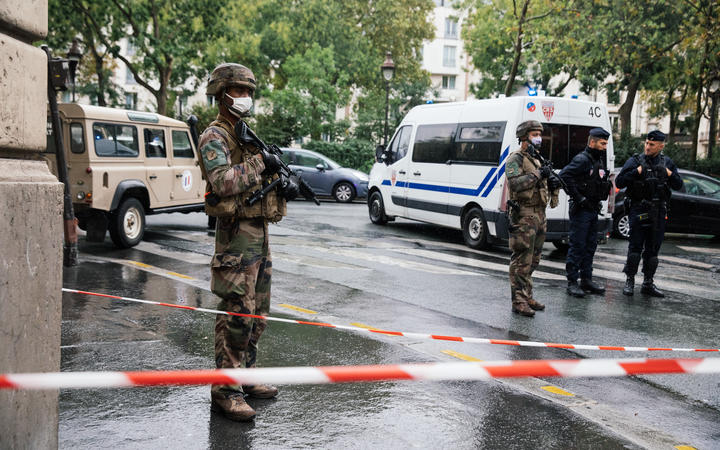 Two suspects have been arrested. One of them was seized in the nearby Bastille area with blood on his clothing, police told the BBC.

Anti-terrorism police have taken over the investigation.

A security cordon has been set up in the 11th arrondissement in eastern Paris.

Nearby metro stations were closed and five schools in the area immediately went into lockdown. The schools were allowed to reopen some hours later.

A blade - described as a machete or a meat cleaver - was recovered at the scene of the attack near the Boulevard Richard-Lenoir.

Police quoted by French media said the "main suspect" was from Pakistan and the second person arrested was from Algeria. They have not yet been named and any connection between them has not been disclosed.

The conditions of the victims have not been made public although French Prime Minister Jean Castex told reporters at the scene that their lives were not in danger.

The attack comes as a high-profile trial is under way in Paris of 14 people accused of helping two jihadists carry out the 2015 attack on Charlie Hebdo, in which 12 people were killed.

The two people wounded were staff at a TV production company, one of their colleagues told AFP news agency.

"Two colleagues were smoking a cigarette outside the building, in the street. I heard shouting. I went to the window and saw one of my colleagues, covered in blood, being chased by a man with a machete in the street," another member of staff at the Premières Lignes production firm said.

The firm has offices in the Rue Nicolas Appert, a side street off Boulevard Richard Lenoir where the former Charlie Hebdo offices are located. A mural to the 12 people killed in the Charlie Hebdo attack is nearby.

The satirical magazine has since moved to a secret location.

The prime minister reiterated the government's "firm commitment to combat terrorism by all possible means".

At a news conference, anti-terrorism prosecutor Jean-François Ricard confirmed that the "main perpetrator" had been arrested and said a "second individual" was also in custody.

"The investigation will continue," he said.

Charles Michel, President of the European Council and former Belgian PM, expressed his "full solidarity with the French people".

"All my thoughts are with the victims of this cowardly act of violence. Terror has no place on European territory," he tweeted.

In a tweet, Charlie Hebdo expressed its "support and solidarity with its former neighbours... and the people affected by this odious attack".

Charlie Hebdo has marked the start of the trial by reprinting controversial cartoons of the Prophet Muhammad that sparked protests in several Muslim countries.

In response, the militant group al-Qaeda renewed its threat to the magazine.

The magazine's head of human resources said earlier this week that she had moved out of her home after receiving death threats.

The defendants in the trial are also accused of helping another jihadist carry out a related attack in which he shot dead a policewoman, then attacked a Jewish store, killing four people.

The 17 victims were killed over a period of three days. All three attackers were killed by police. The killings marked the beginning of a wave of jihadist attacks across France that left more than 250 people dead.