Two officers have been shot during protests in Louisville, Kentucky, after a grand jury decided no-one would be charged with the death of Breonna Taylor. 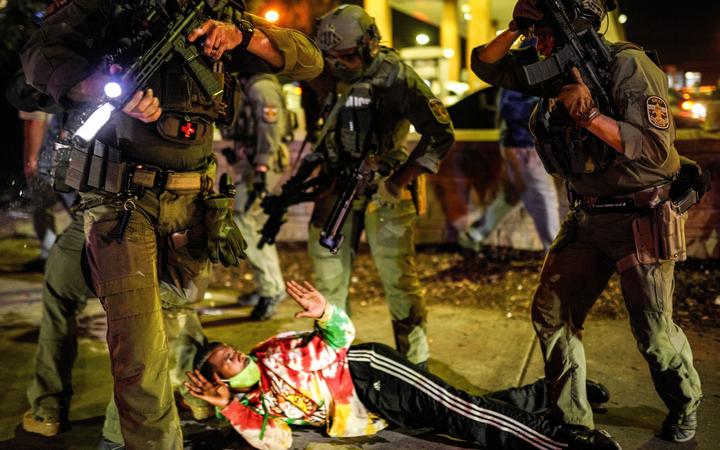 Taylor, 26, a hospital worker, was shot multiple times as officers stormed her home on 13 March.

Earlier today it was announced that a grand jury has charged one police officer over the fatal shooting of Taylor at her home in the US state of Kentucky.

Brett Hankison has been charged, not with Taylor's death, but with "wanton endangerment" for firing into a neighbour's apartment in Louisville.

Two other officers face no charges.

Louisville Police Chief Robert Schroeder said the condition of the officers who have been shot are not life-threatening.

He added that a suspect is in custody.

Hankison was fired from the Louisville Metro Police Department in June after investigators found he had "wantonly and blindly fired 10 rounds" into the apartment, according to his termination letter.

The other two officers who discharged their weapons that night - Jonathan Mattingly and Myles Cosgrove - have not been charged.

A state of emergency was declared in Louisville ahead of the announcement about any possible charges.

Mayor Greg Fischer also set a 9pm to 6.30am curfew in the city that will remain in place for the 72 hours. He earlier said he had declared a state of emergency "due to the potential for civil unrest".

Demonstrations over Ms Taylor's death have been held in the city for more than 100 consecutive days. Police have closed traffic on certain streets where protests have been prevalent and barricades have been erected around the city centre.

Officials earlier agreed to pay her family $US12 million in a settlement. 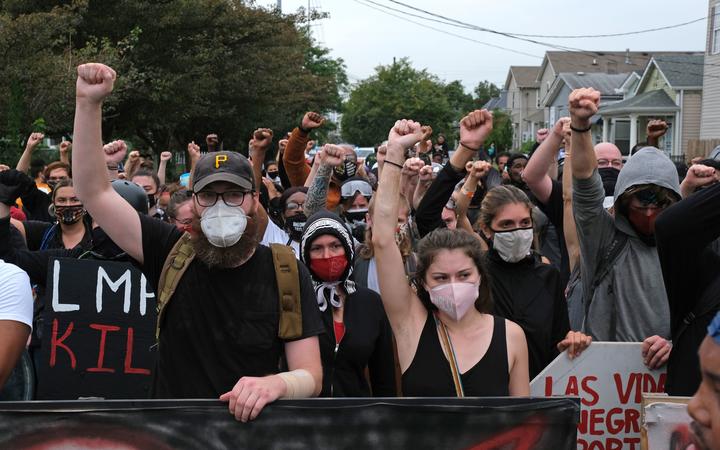 A protest rally in Louisville after the charges against one officer were announced. Photo: AFP

What happened to Breonna Taylor?

Breonna Taylor was at home in Louisville on 13 March when police officers entered her apartment shortly after midnight, her family says.

Narcotics officers raided her home and used a battering ram to take her front door off its hinges. No drugs were found on her property and Taylor had no criminal record. 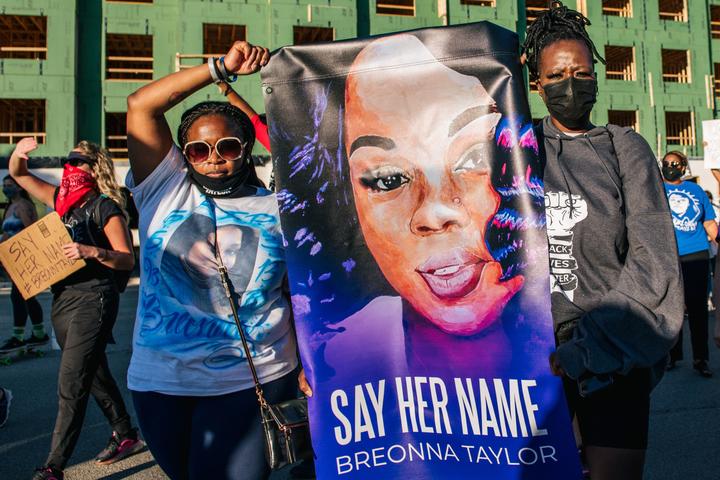 Women hold a sign of Breonna Taylor during a rally in front of the Office Of The Attorney General in Louisville, Kentucky, last week. Photo: AFP / Getty Images

Police were acting on a controversial type of search warrant - known as a "no-knock" warrant - that allows police to enter a home without warning. Police claim they knocked and announced themselves before entering, but Taylor's family and a neighbour have disputed this.

At the time, Taylor was in bed with her boyfriend Kenneth Walker, a licensed gun owner, according to her family. Hearing the commotion, Mr Walker believed people were trying to break into the apartment and he later told police he fired one shot of his pistol.

Officials say Walker's bullet struck a police officer, Jonathan Mattingly, in the leg - an injury for which he later required surgery.

Mattingly and two other officers, Brett Hankison and Myles Cosgrove, returned fire and shot more than 20 rounds. Walker wasn't wounded but Taylor was hit multiple times and died in the hallway of her apartment, lawyers for her family said.

The subsequent police report contained numerous errors, including listing Taylor's injuries as "none" and saying no force was used to enter, when a battering ram had been used.

Walker was initially charged with attempted murder and assault of a police officer, but the case against him was dropped in May amid national scrutiny of the case.

While Hankinson was fired from the force in June, Mattingly and Cosgrove were reassigned to administrative duties.

The Louisville Courier-Journal has reported that six officers are under internal police review for their role in the shooting.

Mattingly wrote an email on Saturday to more than 1000 colleagues in which he criticised city leaders and protesters.

"Regardless of the outcome today or Wednesday, I know we did the legal, moral and ethical thing that night," he wrote in the message, which was published by media outlets on Tuesday.

"It's sad how the good guys are demonised, and the criminals are canonised."

"Your civil rights mean nothing," he added, "but the criminal has total autonomy."