By Lauren Roberts and Henry Zwartz for the ABC Australia

Crocodile wrangler Matt Wright has sparked controversy over a video he posted on Instagram of him getting friendly with a 4-metre crocodile called Bonecruncher. 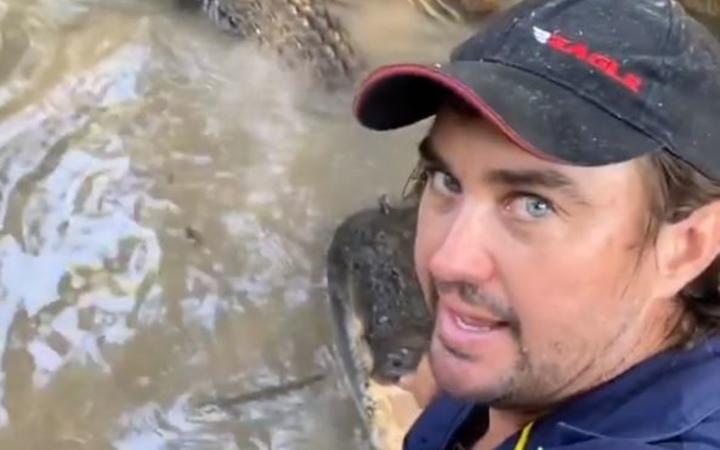 Matt Wright said he was not worried about Bonecruncher, a croc that he had been working with for some time. Photo: Instagram/mattwright

In the video, the large saltie, which is missing part of its lower jaw, can be seen to move towards Wright who places his hand on the end of its nose while looking to the camera.

Speaking to ABC's News Breakfast, Wright said he had known 'Bonecruncher' for 'many years' and the croc had a 'placid' nature.

"It's a great relationship we've built with Bonecruncher, but I do not want to set an example where people think they can get befriend a crocodile. This is something special," he said.

"He hangs out in the shallows and he's quite placid and we've built this relationship over time, where he's not that aggressive."

Wright said he had known the animal for about six years and had seen him physically change over time after fighting with other crocodiles.

"When I first met him he had his full jaw he had another eye and most of his tail, but over the years I've seen him get into different areas during the wet season and get into strife," he said.

Wright said he did not want members of the public to follow his example and get close to crocodiles.

"I don't want to set an example that you can just go and play with a saltwater croc. It's pretty unusual that this crocodile has this persona about him."

The hazards of working in northern Australia, Tommy’s at it again @australia @bisleyworkwear @topendsafaricamp #wildlife @sandpalmsatbynoe

Crocodile expert Grahame Webb said although the video might look dangerous, Wright was an expert who knew what he was doing.

"All around the world, people are working closely with crocs, doing things like this with crocs.

"A lot of the crocs seems to enjoy these relationships with people, if you can say that."

Professor Webb said Wright is also an entertainer and likened his antics to those of the late Steve Irwin.

"It's a show and the guys know exactly what they're doing," he said.

"Steve Irwin was the same. I wouldn't do it, because I'm not into that but it's not unusual, people do get that close to crocodiles."

Professor Webb said a lot of the video's critics probably had not seen a crocodile in the wild.

"People in the cities are all experts on crocs, they've never seen a croc," he said.

Professor Webb also said Bonecruncher may be missing part of his lower jaws, but injured crocodiles would still kill.

"Crocs are crocs, they're always getting it mutilated by other crocs," he said.

In a statement, a spokesperson for the NT Department of Environment, Parks and Water Security warned Territorians that "croc danger is real".

"When it comes to the danger posed by crocodiles, the NT Government takes safety seriously and educates the community and manages public behaviour wherever possible to reduce the risk," they said.

"However ultimately, how people behave around crocodile habitats is their own responsibility."

The spokesperson said saltwater crocodiles were dangerous and any body of water in the Top End could contain "large and potentially dangerous crocodiles".

"Croc danger is real, don't risk your life," they said.