Around 500,000 people in Oregon, or 10 percent of the state's population, were ordered to evacuate on Friday and residents of its largest city, Portland, were told to be ready to go as extreme wind-driven wildfires scorched US West Coast states, causing at least 24 deaths. 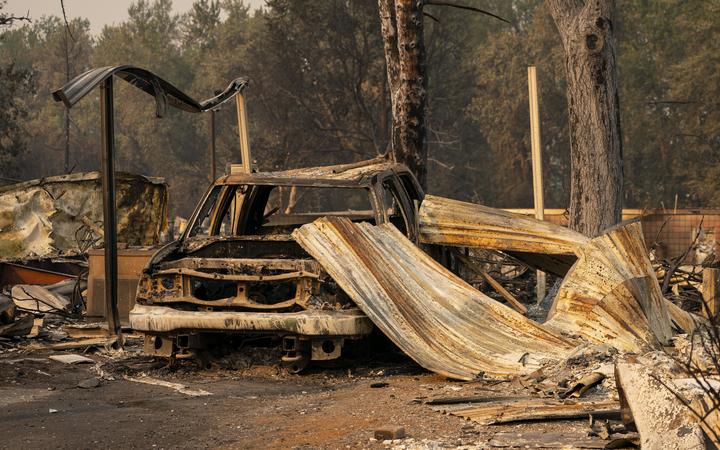 A damaged home and car in a mobile home park destroyed by fire on 10 September 2020 in Phoenix, Oregon. Photo: AFP / 2020 Getty Images

About 100 wildfires have burned an area nearly as large as the state of New Jersey across the US West, creating smoke that gave California, Oregon and Washington state the worst air quality levels in the world.

Oregon bore the brunt of the destruction, with search teams still unable to enter areas where fires burned through multiple small communities in the Cascade mountains.

Molalla, a community about 40km south of downtown Portland, was an ash-covered ghost town after its more than 9000 residents were told to evacuate, only 30 refusing to leave, the city's fire department said.

The logging town was on the front line of a vast evacuation zone stretching north to within 4.8km of downtown Portland, with Clackamas County police setting a 10pm (local time) curfew to deter "possible increased criminal activity."

About 10 percent of the state's population faced red "GO!" warnings to leave homes immediately, while hundreds of thousands more were under yellow "BE SET" warnings, to leave at a moment's notice, or green "BE READY" alerts.

Towns southeast of Portland were at the mercy of wind direction and strength after two of Oregon's largest wildfires merged into one. 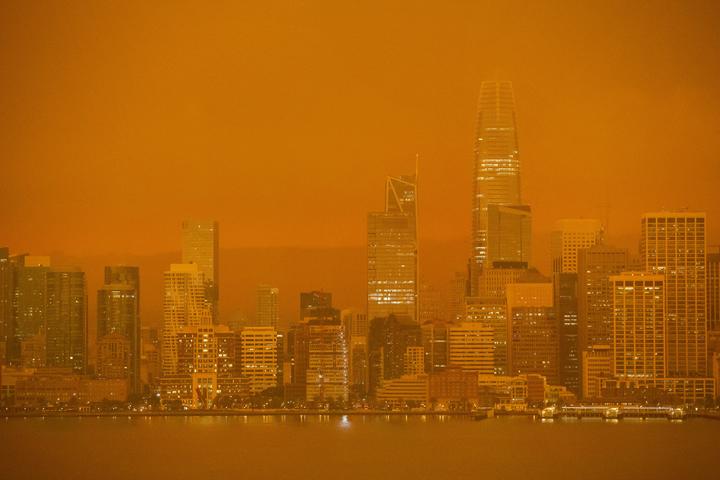 The San Francisco skyline is obscured in orange smoke and haze from the fires. Photo: AFP / Brittany Hosea-Small

As winds dropped and moisture levels rose on Friday, firefighters launched drones into an apocalyptic yellowish smog to see how close the flames were.

"We don't know where the fire is," said Molalla Fire Department Lieutenant Mike Penunuri, staring into smoke in the town centre which reduced visibility to one block.

In southern Oregon, a dystopian scene of burned residential subdivisions and trailer parks stretched for miles along Highway 99 south of Medford through Phoenix and Talent, one of the worst hit areas, according to a Reuters photographer at the scene.

Blazes jumped from wildfires burning through scrub and forest to suburban firestorms as flames leaped from house to house.

Oregon Department of Forestry fire chief Doug Grafe said he would need twice the 3000 personnel he currently had to get a grip on around three dozen major blazes.

In neighbouring Washington state to the north, online video from the Tacoma area showed fires starting in a residential area and setting homes ablaze, locals running from house to house to warn neighbours.

"Everybody out, everybody out!" a man screamed as firefighters tried to douse flames.

The death toll from the siege of West Coast fires that began in August jumped to 24 after seven people were found dead late Thursday in torched mountain communities around 137km north of Sacramento, California, state fire authority Cal Fire reported.

Paradise, a town blasted by California's deadliest wildfire in 2018, had the world's worst air quality index reading at 592, according to the PurpleAir monitoring site, as two of the state's largest blazes burned on either side of it. PurpleAir's world map showed parts of the three fire-hit states with air quality readings far worse than anywhere else.

Over 68,000 people were under evacuation orders in California where the largest fire in state history has burned over 299,470 hectares in the Mendocino National Forest around 190km northwest of Sacramento.

"We had four hours to pack up our pets and a few medications and things like that," said retiree John Maylone from an evacuation centre in Fresno, California, after he was forced to leave three of his 30 cats as he fled the massive Creek Fire.

Police opened an arson investigation into the Oregon fire which destroyed much of Phoenix and Talent.

But at least four Oregon police departments warned of "fake" online messages appearing to be from law enforcement that blamed left-wing anti-fascists and right-wing Proud Boy activists for starting the fires.

Blazes in central Oregon also destroyed multiple communities in the Cascades and torched areas of coastal rainforest normally spared from wildfires. In eastern Washington state, a fire destroyed most of the tiny farming town of Malden.

"This will not be a onetime event," Oregon Governor Kate Brown told a Thursday news conference. "We are feeling the acute impacts of climate change"

Over 100 years of fire suppression by state and federal authorities has created a huge build-up of dead trees and undergrowth to fuel fires that have naturally burned in the West's forests for aeons.

In recent decades Americans have built houses in those forests as second homes or due to rising prices in metropolitan areas like San Francisco, Portland and Seattle.

Wildfires have burned over 1.25 million hectares in California so far this year, marking a record for any year, with six of the top 20 largest wildfires in state history occurring in the last nine months.