US President Donald Trump has declared that wildfires burning through homes and devastating precious forestry in California are a major disaster and he has released federal aid. 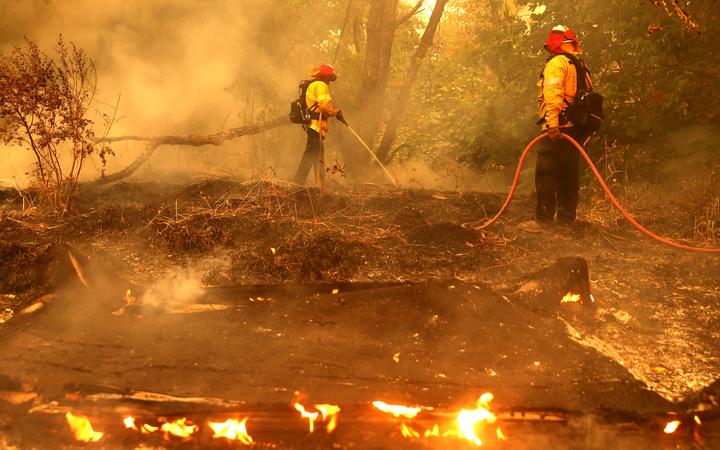 Some fire-fighters are working 72-hour shifts in the hot dangerous conditions. Photo: AFP

At least six people have died and thousands have evacuated.

Most of the destruction has been caused by three large fires complexes in mountainous and wooded rural areas.

On Saturday Governor Gavin Newsom said the SCU Lightening Complex fire south and east of San Francisco is the third-largest in California's history.

Video tweeted by the governor showed burnt tree stumps against the reddened fumes-filled sky and plumes of white smoke rising from ash-laden ground.

An evacuation order on Saturday extended to thousands of people in the Bay area near San Jose and warned others to be prepared to abandon their homes at short notice.

Surveying the SCU Lightning Complex -- this is now the third largest wildfire in CA history. pic.twitter.com/MKhVD8u48U

Exhausted fire-fighters continue to battle the flames, with some working 72-hour shifts in the dangerous, hot conditions reports AP news agency. "They're scrambling for bodies" to help fight the fires, an official in the city of Fresno told Reuters news agency.

In California's oldest state park, flames scorched redwood trees that began their lives more than 2000 years ago. The historic visitor centre of Big Basin State Park was burnt to the ground and officials say some trees, which tower as high as 100 metres, have fallen as the area was "extensively damaged".

The state faces a more acute shortage of personnel than usual - the coronavirus pandemic has depleted a fire-fighting corps made up of prisoners, which has helped the state battle blazes since World War II, due to early releases from jail.

At least 43 people including fire-fighters have been injured, and hundreds of buildings have burned down and thousands more are threatened.

After doubling in size on Friday, the fires continued to grow moderately on Saturday and fire-fighters made some progress in containing the flames.

More than 12,000 dry lightning strikes started the blazes last week during a historic heat wave in which thermometers in Death Valley National Park reached what could be the highest ever temperature reliably recorded.

The largest wildfire, called the LNU Lightening complex, is in the prominent wine-growing areas of Napa and Sonoma north of San Francisco and is just 15 percent contained, CalFire said on Saturday. 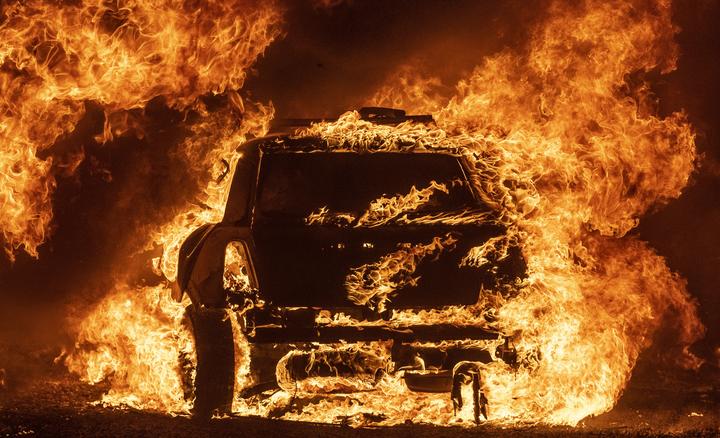 A flame-engulfed car at a residence in Vacaville, California during the LNU Lightning Complex fire. Photo: AFP

Further south in Santa Cruz county, 115 homes have been destroyed and some residents evacuated.

"I left with my clothes ... two guitars and a dog," one evacuee in Santa Cruz told CNN affiliate KGO.

Fire-fighters dug a fireline around the University of California Santa Cruz campus as flames came within a mile of the buildings and surrounding area.

Gov Newsom has requested help from as far afield as Australia and Canada. Fire-fighters, engines and surveillance planes raced in from US states including Oregon, New Mexico and Texas.

Although California is used to wildfire, the governor called the fires unlike anything the state had seen before. "If you don't believe in climate change, come to California," he tweeted on Saturday. 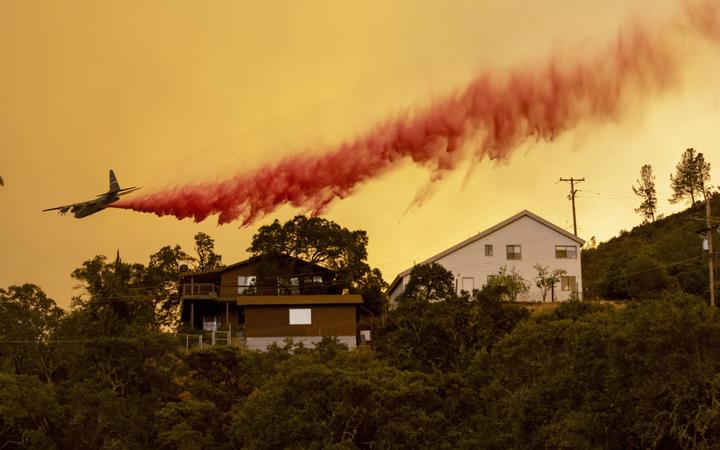 California also has highest rate of Covid-19 cases in US

With more than 650,000 coronavirus cases, California also has the highest number of infections in the US, and some evacuees have said they are afraid to go to emergency shelters.

US agencies have updated disaster preparedness and evacuation guidance in light of Covid-19. People who may be required to flee have been to told to carry at least two face masks per person, as well as hand sanitiser, soap and disinfectant wipes.

Emergency shelters are enforcing social distancing rules and mask wearing, and have even given individual tents to families to self-isolate. Some counties are seeking to set up separate shelters for sick evacuees or anyone who is found to have a high temperature.

Officials say people should consider sheltering with family and friends.

Officials also advise people to remain indoors due to the poor air quality outside.

California is also facing electricity shortages, which have caused rolling blackouts for thousands of customers. Officials have appealed for residents to use less power or risk further cuts.

Satellite images show smoke blanketing nearly all of California, as well most of Nevada and southern Idaho.