Six people have died in some of California's largest-ever wildfires that have fouled the air with heavy smoke across much of the western United States. 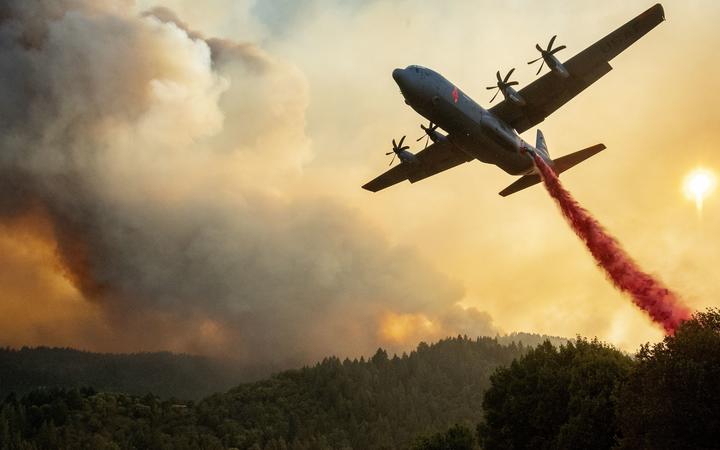 An aircraft drops fire retardant on a ridge during the Walbridge fire, in Healdsburg, California. Photo: AFP

The worst of the hundreds of fires burning across the state are in the mountains to the south and east of San Francisco.

Officials say the fires were started by more than 12,000 dry lightning strikes amidst an historic heatwave.

Hundreds of buildings have burned down and thousands more are threatened.

By today, emergency officials said some of the fires had doubled in size from the day earlier and have now forced 175,000 residents to flee. 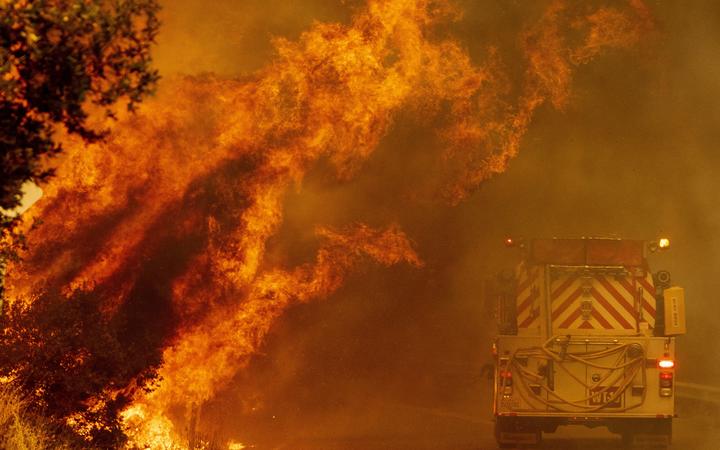 Two of the fires are now the 7th and 10th largest in the state's history, Governor Gavin Newsom said in a news conference as he urged President Donald Trump to sign a major disaster declaration.

"We simply haven't seen anything like this in many, many years," he said, adding that an area the size of the US state of Rhode Island has already burned within California.

"If you are in denial about climate change come to California," Newsom told the Democratic National Convention on Thursday night.

One of the hottest air temperatures recorded anywhere on the planet in at least a century, and possibly ever, was reached last weekend at Death Valley in California's Mojave Desert, where it soared to 54.4 Celsius.

In Santa Cruz, a city of around 65,000, residents were told to have evacuation 'go bags' at the ready. Bulldozers dug fire lines on the northern flank of the University of California Santa Cruz campus, around 4.8km northwest of the coastal city's boardwalk.

With more than 650,000 coronavirus cases, California also has the highest number of infections the US, and some evacuees have said they are afraid to go to emergency shelters.

One woman told CNN that she was forced to flee to a community centre in Vacaville, but is refusing to go inside for fear of catching coronavirus.

"Not only are we dealing with Covid, but with also the heat and now the fires," said Cheryl Jarvis, who said she is currently sleeping in her Toyota Prius.

US disaster agencies have updated disaster preparedness and evacuation guidance in light of Covid-19. People who may be required to flee have been to told to carry at least two face masks per person, as well as hand sanitiser, soap and disinfectant wipes.

Emergency shelters are enforcing social distancing rules and mask wearing, and have even given individual tents to families to self-isolate. Some counties are seeking to set up separate shelters for sick evacuees or anyone who is found to have a high temperature.

In another pandemic twist, officials also advise that people remain indoors due to the poor air quality outside.

California is also facing an electricity strain, which is has caused rolling blackout for thousands of customers. Officials have appealed for residents to use less power or risk further cuts.

In total, over 1950km have burned across the state.

Satellite images show smoke blanketing nearly all of California, as well most of Nevada and southern Idaho. 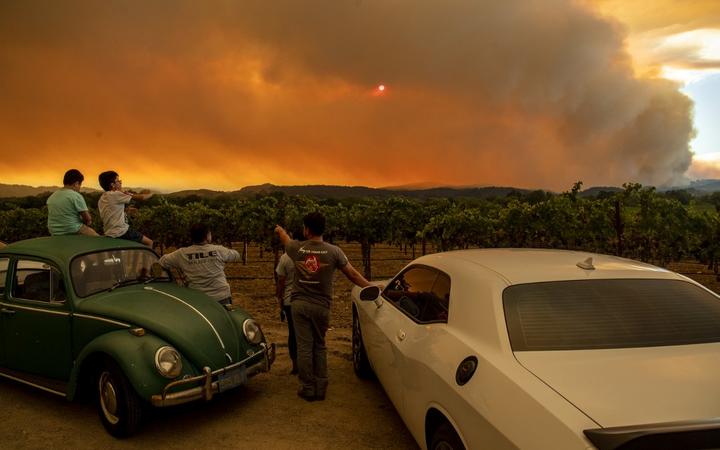 People watch the Walbridge fire from a vineyard in Healdsburg, California. Photo: AFP

Fire-fighting teams are stretched thin across the state. A volunteer firefighting corps made up of state prisoners, which has helped the state battle blazes since World War II, has been diminished this year due to the pandemic.

President Trump blamed California for the fires, and threatened to withhold federal funding as he repeated a suggestion that was met with bemusement when he first raised it in 2018.

Speaking to supporters in Pennsylvania yesterday, he said he had told state officials: "You gotta clean your floors, you gotta clean your forests - there are many, many years of leaves and broken trees and they're like, like, so flammable, you touch them and it goes up.

"I've been telling them this now for three years, but they don't want to listen," he said. "'The environment, the environment,' but they have massive fires again."