The first commercial flight from Israel to the United Arab Emirates has landed, a major step in normalising relations after the announcement of a peace deal. 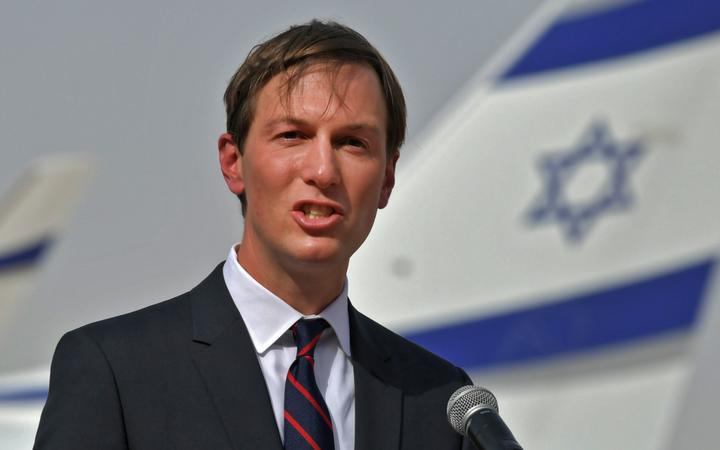 US presidential adviser Jared Kushner speaks at Abu Dhabi airport after the arrival of the historic flight. Photo: AFP

The El Al airliner made the three-hour trip, carrying a delegation of Israeli and US officials.

The UAE has become only the third Arab country in the Middle East to recognise Israel since its founding in 1948.

On Saturday, the UAE repealed a law boycotting Israel which had been in place since 1972, and last month the two countries opened direct telephone services for the first time.

The agreement to normalise relations - brokered by the US - was made public in a surprise announcement on 13 August.

Kushner led secret talks which resulted in the agreement between Israel and the UAE, a federation of seven Arab monarchies in the Gulf, including Dubai.

Speaking to the media after landing in the UAE capital Abu Dhabi, Kushner described the deal between the countries as a "historic breakthrough" and said it was a "tremendous honour" to have joined the flight.

"What happened here was three great leaders came together and they started writing a new script for the Middle East. They said the future doesn't have to be predetermined by the past," he said

The joint teams will meet Emirati representatives to develop areas of co-operation between Israel and the UAE. The return flight will be numbered LY972, after Israel's international dialling code.

In a tweet in Hebrew, Israeli Prime Minister Benjamin Netanyahu hailed the advent of the flight as an example of "peace for peace" - alluding to his long-held disbelief in the notion that only trading occupied land will bring peace between Israel and Arab countries. 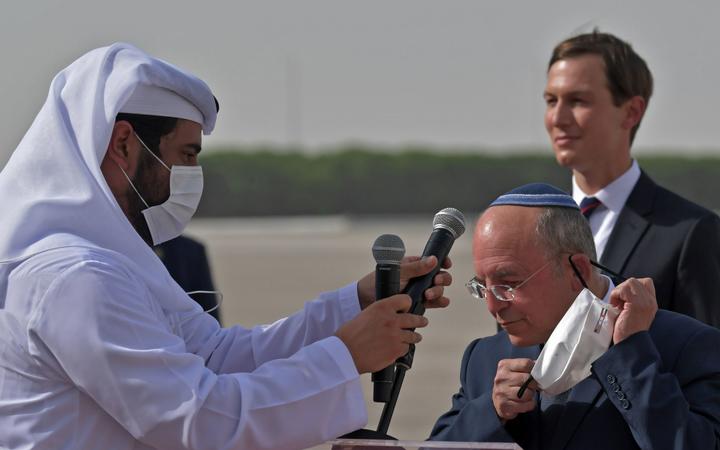 The head of Israel's National Security Council, Meir Ben-Shabbat, puts on a facemask next to US presidential adviser Jared Kushner at the tarmac of Abu Dhabi airport. Photo: AFP

While it was welcomed by much of the international community, the UAE's recognition of Israel without the precondition of the creation of a Palestinian state was denounced by the Palestinians as a betrayal of their cause.

In return for official relations with the UAE, Netanyahu agreed to suspend controversial plans to annex parts of the occupied West Bank - land claimed by the Palestinians for a future state of their own.

Kushner said his message to Palestinians was "one of hope".

"We've put an offer to their leadership on the table that will enable them to have a state and self-determination and an economic plan that could revitalise their economy, but we can't want peace more than they want peace and so when they are ready the whole region is very excited to help lift them up and move them forward but they can't be stuck in the past," he said.

Palestinian officials have condemned the deal, saying it undermines their struggle for an independent state.

"Peace is not an empty word used to normalise crimes and oppression," Saeb Erekat, a leading figure in the Palestine Liberation Organisation, said today.

"Peace is the outcome of justice. Peace is not made by denying Palestine's right to exist," he added.

A US peace proposal unveiled in January holds out the prospect of a Palestinian state, as well as a $50 billion ($US74b) investment plan for the Palestinians, though the Palestinians have rejected the proposal as heavily biased towards Israel.

Before the UAE, Egypt and Jordan were the only other Arab countries in the Middle East to officially recognise Israel, after signing peace treaties in 1978 and 1994 respectively.

Mauritania, a member of the Arab League in north-west Africa, established diplomatic relations with Israel in 1999 but severed ties in 2010.