A surfer has suffered severe cuts to her leg in a shark attack at Shelly Beach in Port Macquarie, on the NSW north coast. 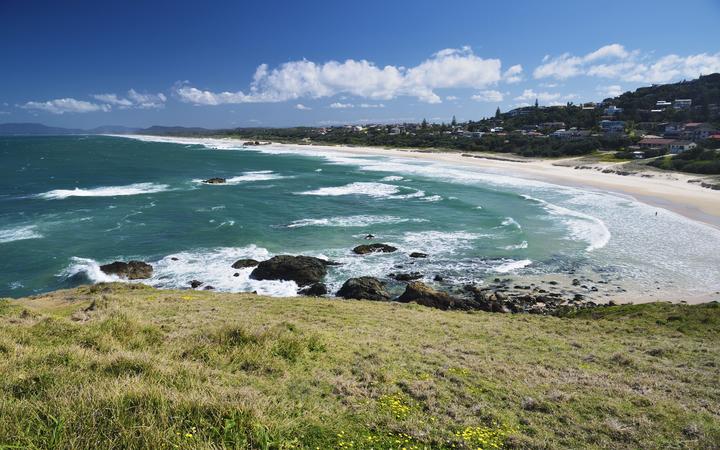 The 35-year-old woman was treated by paramedics who were called to the beach just after 9.30am Saturday, NSW Ambulance said.

She was taken to Port Macquarie Base Hospital and later flown to John Hunter Hospital in Newcastle, where she was expected to undergo surgery.

He praised people on the beach who helped the victim by applying a makeshift tourniquet, describing it as "potentially life-saving".

"The bystanders on scene that rendered assistance should be commended. They did an amazing job before we arrived," Inspector Beverley said.

"A makeshift tourniquet was utilised, which was a potentially life-saving instrument. She's very, very fortunate without doubt."

The woman's companion, who was surfing nearby, punched the shark repeatedly until it let go, police and surfers said.

"A surfer who witnessed the attack responded quickly to assist the woman by hitting the shark repeatedly until it released the woman's leg," Steven Pearce, chief executive of Surf Life Saving NSW, said.

The man helped the woman out of the water and up the beach to a waiting ambulance.

The woman was wounded in several places after being bitten on the right calf then the back of her thigh while surfing.

She is believed to be in a serious but stable condition.

The shark was a juvenile great white shark about 2 to 3 metres in length, the NSW Department of Primary Industries (DPI) confirmed.

Inspector Beverley said it took paramedics only eight minutes to get to the scene.

"These things are so random and it frightens all of us of course. This is the third serious shark attack on the north coast over the last few months."

Beaches in the area, including Shelly Beach, Main Beach, Towns Beach, Tacking Point and Nobbys Beach have been closed for 24 hours.

Surf Life Saving NSW is using drones, jetskis and inflatable rescue boats to try and spot the shark and make sure there are no others in the area.

"[We're] notifying any people that do end up in the water again at all the nearby beaches just to advise them that it's at their own risk - we advise them not to swim at the moment due to what's happened," lifeguard supervisor James Turnham said.

"If there's another shark sighting, we may need to extend that period of beach closures. If there's no further sightings, hopefully by Monday things will be back to normal."